More than half of the UK population feel climate change has had a negative impact on their mental health, according to our research.

Our survey with YouGov found that 55 per cent of people feel that climate change has impacted on their wellbeing to some degree.

Of those who said climate change has affected their mental health, 65% were concerned about the impact on the natural world; 63% about increased frequency of natural disasters; 58% were worried about what the world would be like for future generations; and 30% were worried about how their life would be affected.

Our infographic captures some of the highlights of the survey.

She said: “There’s genuine anxiety and depression, not just for people for themselves, but also for the planet, for future generations, and for people from less advantaged backgrounds who may be more vulnerable to the consequences of climate change.

“It’s such a big issue for people, and they feel powerless to be able to influence it or change it.”

Steffi Bednarek, BACP member and climate psychologist who has written on the psychological impact of climate change, said she was struck that 38% of people surveyed reported not being affected at all.

"Anxiety is an appropriate response in the face of danger. The dysfunction may therefore not lie in the experience of eco-distress, but in the absence of it,” she said. “A certain degree of discomfort is necessary in order for people to wake up to the enormity of our times.

"Counselling and psychotherapy can support people to increase their capacity to face overwhelming feelings without numbing or collapsing.

“If people dare to step into the biggest and largest version of themselves, act and use their voice, amazing things are possible. This is how fear can be a catalyst for powerful change.”

Fiona Ballantine Dykes said that counselling and psychotherapy can help people identify what they can influence.

“If you’re experiencing depression, anxiety, then talk to a therapist,” she said. “Expressing your feelings and emotions is a good thing.

“It helps you see how you can do things consistent with your values and separate out what’s within your power to change.

“One of the things we’ve learned during the pandemic is things that seemed impossible, to get a whole nation to stop driving, for example, happened.

“People said you couldn’t get rid of plastic bags, but they did by asking people to pay for them. Policies may seem distant, but they affect people directly.

“For me, there’s an optimism that mass behaviour can be changed despite lack of trust and confidence in our institutions to lead the way.”

“I don’t think we should appease the distress to such an extent people go back to normal and don’t worry about it,” she said.

“There needs to be a window of tolerance. How do we support people to allow themselves to live with feelings of distress to be able to make change?”

To speak to a BACP counsellor or psychotherapist about eco-anxiety, visit our Therapist Directory.

All figures, unless otherwise stated, are from YouGov Plc.  Total sample size was 5527 adults. Fieldwork was undertaken between 19th - 28th February 2020.  The survey was carried out online. The figures have been weighted and are representative of all GB adults (aged 16+). 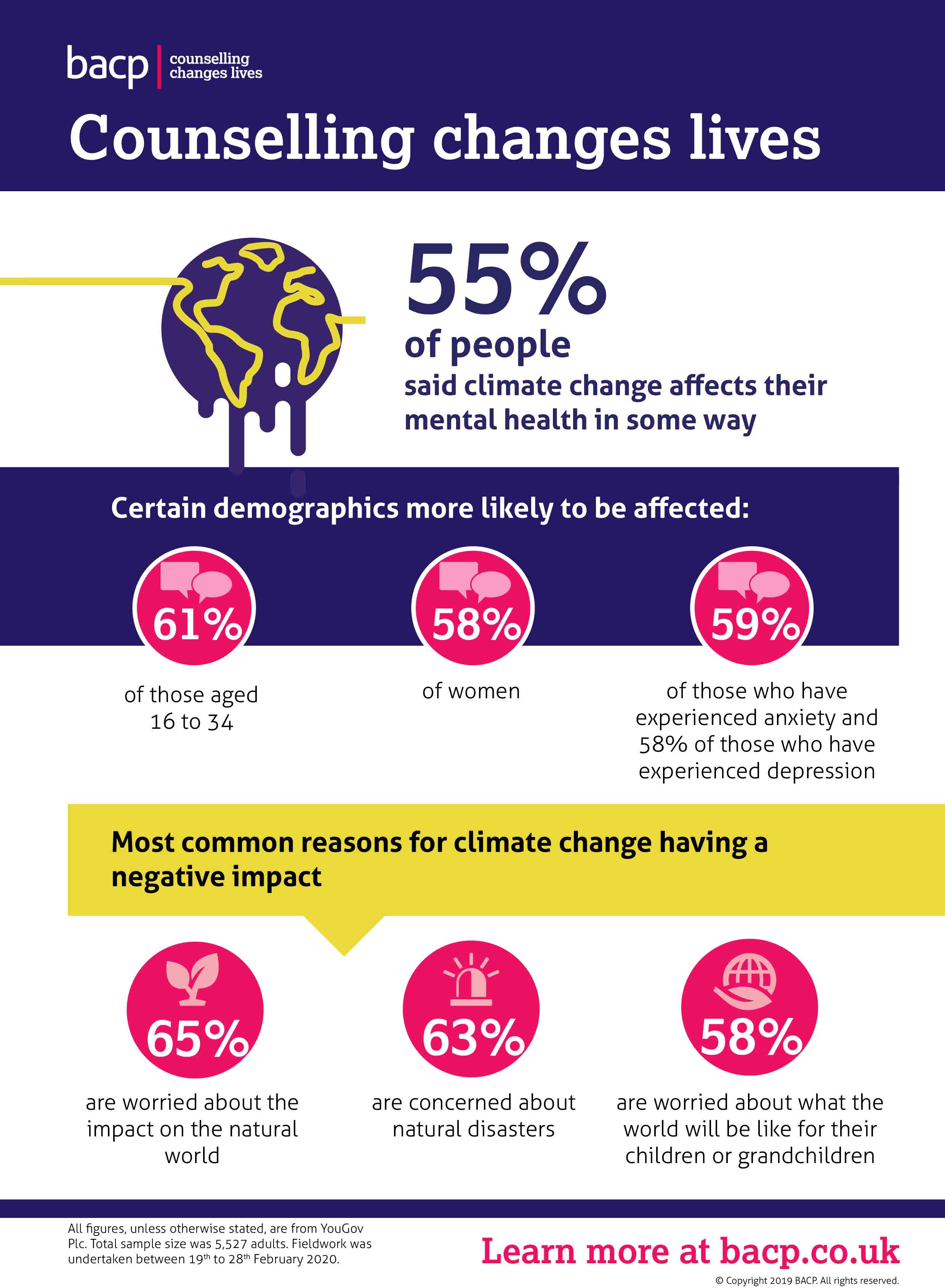