Just playing?
Ilaria Calussi wonders about, and discusses, the nature of play in therapy

What’s the point of fathers?
Nick Luxmoore and a supervisee tussle with this thorny issue 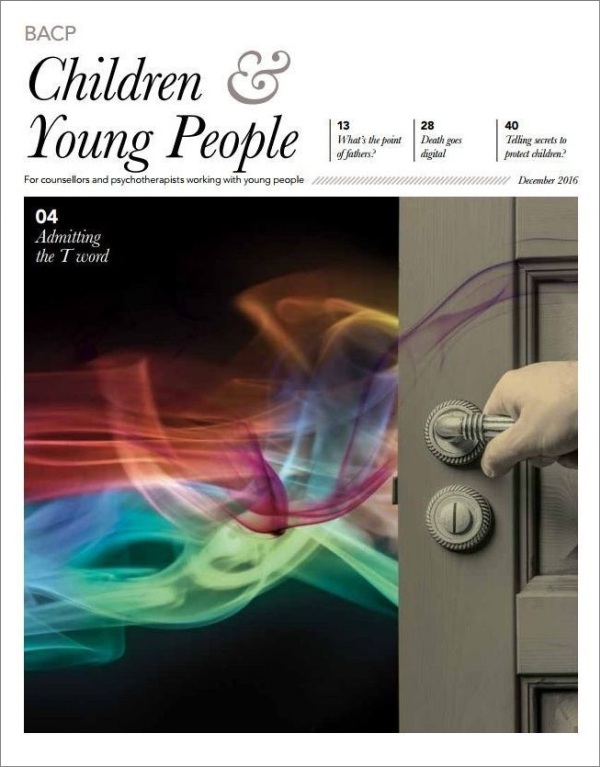 I recently read a piece about hygge, a Danish construct that equates somewhat to ‘cosiness of the soul’ or ‘cocoa by candlelight’, according to The Economist.1 A sort of relaxed intimacy and enjoyment of everyday pleasures, if you will (which seems difficult to reconcile with their love of noir TV!). Hygge is like a national ritual, almost obligatory to the exclusion of reality at times. According to The Guardian,2 nine books with hygge in the title have been published this year.

This focus on hygge in the media has made me wonder if it’s in danger of becoming the next fad in the counselling world. We’ve had positive psychology, mindful colouring and gratitude. Now hygge or conviviality. I’m wondering if an era of superficiality and life-affirming joviality is moving in on us. Will we, too, soon be encouraging our young clients to bypass the really important stuff in the interests of pursuing temporary happiness?

I can’t know the truth of hygge; I’m not Danish. But in the UK at least, under a suitably modern ‘that’s fine by me’ or laissez-faire veneer, there frequently lurks an ‘anything but that’ attitude when faced with real difference – ‘that’ being something big, like the idea of gender fluidity and the spectrum of sexuality. Jeanine Connor’s Admitting the T word, with which we open this issue, encourages us to investigate transgender, and to really keep up, understand, allow for possibilities, and be available to our young clients. They need a safe place to explore their own sexuality and any amount of gentle conviviality and mere nodding will not communicate to them that we are that place.

Louis Weinstock takes issue with death-talk in a similar vein. Death has become a mentionable part of our happy and relaxed, live-longer lives, and we can now plan for it in detail. But, as Louis notes, that privilege and space is not available in the very communities where it is going to be needed earlier than elsewhere – among the deprived, poor and less healthy, whose children will likely face anticipatory grief and sudden bereavement at a young age and have no resources or space in which to explore it. Hygge and enjoying simple everyday things in the moment is good, but not if it lulls us into complacency. Louis’s new video game is designed to go beneath our social veneer in order to offer children of any background what they need – in an acceptable-to-them form. For which, read ‘digital’.

And thinking of digital, I have noted with interest all the feedback on the journal from those who were kind enough to fill in the online questionnaire we offered. Thank you for your comments. I bear them all in mind when commissioning, and several points have been addressed already. What we have in this issue, though, is a focus on basics. How do we work with under-fives? How do we think about the many missing fathers? How can we counsel more effectively in schools? How can we support the increasing number of young clients who live in domestically abusive homes? How do we justify play therapy versus any other form of play? What is the problem for counsellors with the latest mandatory reporting plans?

Counselling may not represent the height of social levity, but a relaxed intimacy and a soul-enriching meeting in the therapy space (professionally boundaried, of course) have been at the heart of counselling with young people since its inception. They don’t like manuals and formality. Besides, the art of counselling does, in its various manifestations, light a candle in the lives of those we work with. You could almost call it hyggelige – but without the cocoa.

1 Anon. Cocoa by candlelight. The Economist 2016; 1–7 October: 39.
2 Booth M. Why the craze for Danish cosiness is based on a myth. The Guardian 2016; 4 September. www.theguardian.com/world/shortcuts/2016/sep/04/hygge-denmark-danescosiness-wealth-antidepressants-scandinavians