From the Chairs
Maggie Robson and Sue Pattison

Thoughts from… a trainer about observation
Sue Kegerreis

Thoughts from… a supervisor about therapy
Nick Luxmoore

Thoughts from… a counsellor about space
Lucy-Jean Lloyd

Text, transition and transference
Felicity Runchman discusses the potential and the challenges of text-based online counselling with young people

Resilience and agency: the missing link
Elen Thomas encourages agency in young people to promote collaborative treatment rather than something that is done to them

Co-working with compulsions, conflicts and containment
In the third article of our Working together series, three clinicians from The Therapeutic Consultants illustrate how they worked collaboratively with a family in crisis 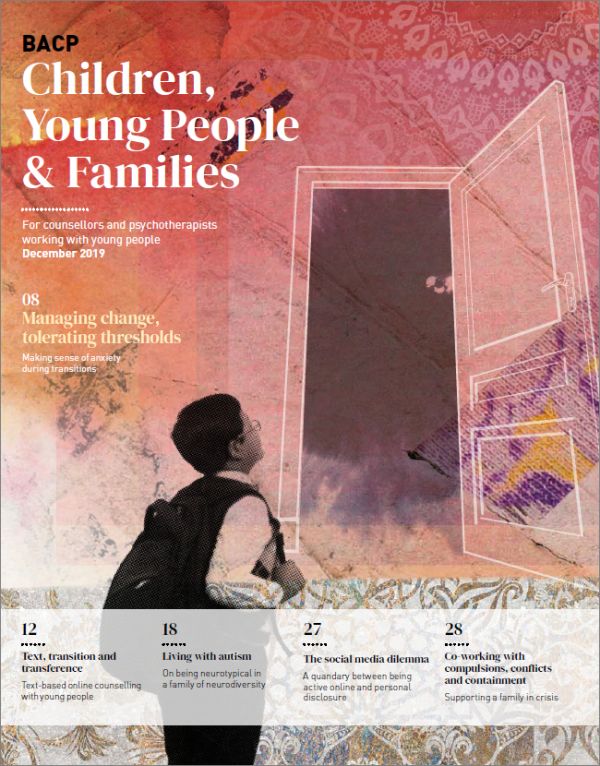 Divisional members and subscribers can download the pdf of this issue from the BACP Children and Young People archive.

Children and young people are changing the world – or trying their damned hardest to – and I vociferously applaud them. Conversations in the therapy room are more politicised than ever before, as young people wonder and worry about climate change, ocean pollution, single-use plastics and the will we/won’t we of Brexit. They have role models their own age who they can relate to and they, like all of us, are feeling the ‘Greta effect’.1

My support for the Climate Strike via social media led to unprovoked abuse. I’ve heard from contemporaries who have been attacked online in the course of their work too – that’s attacked not criticised , which I accept comes with the territory of being in the public realm. When did abuse become part of the social (media) norm? For us, it’s relatively minimal, while for 16-year-old climate and environmental activist, Greta Thunberg, the haters are copious. She’s been condemned for her appearance, age and diagnoses (Asperger’s syndrome, OCD and selective mutism). In response, Greta said, ‘When haters go after your looks and differences… you know you’re winning! I’m sometimes a bit different from the norm. And – given the right circumstances – being different is a superpower’.2 To refer to her as inspirational seems woefully inadequate. Bravo Greta!

For this issue, I was ‘In conversation with…’ Tyler Inman (age 122/3). This remarkable young man wrote a book before the age of 11 and cites Asperger’s as enhancing his focus and drive. Bravo Tyler! Neville Tomlinson offers a different perspective of ‘Living with autism’ as the only neurotypical member of a neurodiverse household. Our lead article – ‘Managing change, tolerating thresholds’ – by Sarah Haywood is an inspiring read. She draws on social anthropology to make sense of the anxiety many young people experience during periods of transition. I find it stimulating From the Editor to be presented with a different perspective on a familiar theme. For the third part of our ‘Working together’ series , three clinicians preach what they practise in ‘Co-working with compulsions, conflicts and containment’ – together; no mean feat! There’s another collaboration in ‘Measuring with intent’, where two members of Manchester-based social marketing agency, Social Sense, share their principles for delivering social change.

We’re collaborating too; you and I. I’ve been overwhelmed by the positive responses, on social media and direct to my inbox, since I took over as editor – thank you most sincerely. I’m continuing to respond to the reader survey by commissioning a number of shorter reads. This issue, John Radoux shares his ‘Social media dilemma’, which complements our ‘Talking point’ about personal disclosure; another feature where we have the opportunity to collaborate. ‘Leading the way’ has been expanded to share even more divisional news as well as regular updates from Jo Holmes. Samia Quddus responded to my invitation in the September issue to share experiences of CPD and has already penned an article for the March issue about reconciling faith and counselling; something to look forward to as the dark days dwindle on. Until then, stay warm and I look forward to bringing you more inspiring reads in the spring.

If you would like to write a response to anything in this issue, contribute to Talking point, write a review or submit an article for consideration, please contact the editor at cypf.editorial@bacp.co.uk