CAMHS and i-THRIVE
Anna Moore on the crisis in CAMHS, and new developments 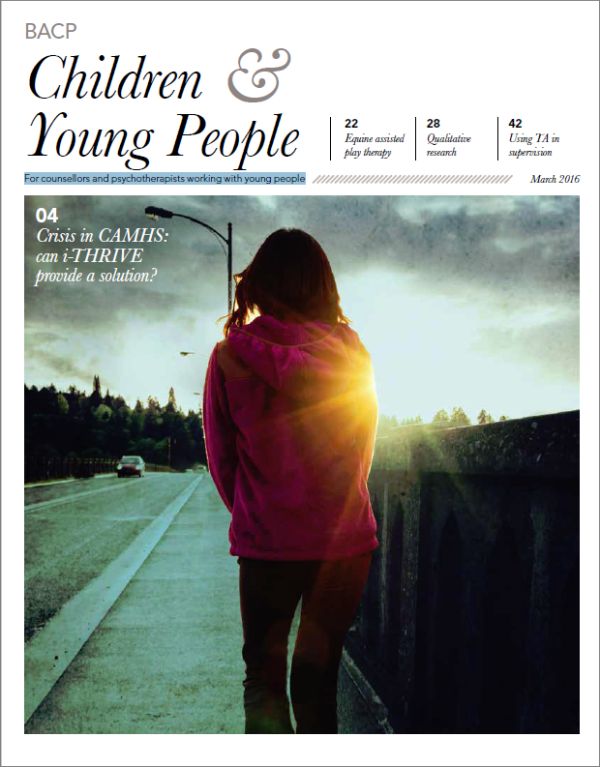 Often, when writing up clients’ notes, I find myself metaphorically cheering from the sidelines at the hard work they’ve been doing in moving towards renewed mental health and wholeness. If I were to think about what awaits them if my support fails and they need even more specialist input, I would probably lose the will to live, given the current general provision for young people’s mental health needs.

And these are great. For instance, last December, the Sunday Telegraph reported that a survey of nearly ten thousand five hundred eleven year olds showed that those from broken or rearranged families were three times more likely to suffer mental health problems.1 And Andy Bell, chief executive of the Centre for Mental Health, commenting in the same article, admitted that we don’t know from the information available why children living with both parents are less likely to have mental health problems at age eleven, but posited that incomes and poverty have their effect and that stress and distress among parents may be an important factor. This, I think, is roughly what we’ve deduced from our day-to-day work with young people and our knowledge of their family context. But rearranged households are now commonplace and these children will run the country in future. So we need ways of providing suitable timely help.

Which beings me to Nikki Kiyimba, who has written for us about the value of qualitative research in moving towards better services. The significance of it is fairly obvious. Firstly, we need to take account of the context of the children we want to help – or provision will miss its target. And secondly, we need to hear exactly what is causing distress in an individual child, not ten thousand five hundred children in general. Then needs can be met.

I’ve always been slightly suspicious of mere figures, anyway, because figures only give a broad sweep of a situation. Such as the fact that CAMHS is not coping, that many clients do not reach the threshold now, despite their need, and that waiting times are often horrendous. On the other hand, words tell us individual stories. ChildLine has recently underlined this in its report that about thirty-five thousand of the telephone counselling sessions they conducted in 2014–15 were related to low self-esteem and unhappiness.2 Although collated into a numerical announcement, these were thirty-five thousand individual stories when the children rang in, not tick boxes. And the counsellors will not have applied one solution to all of them, but would have listened to each child’s predicament and helped them decide what they wanted to do – or not. The child’s choice. Most of them would not meet the current CAMHS threshold anyway, so something more is needed in the community at large.

And this is why I asked Anna Moore to write about the current state of CAMHS and the roll-out of a new conceptual framework that proposes to work in the system but be distinct and wider in scope. The THRIVE model had been mentioned in an earlier article in this journal,3 and I felt it warranted further investigation for those of us who hadn’t encountered it. The idea behind the THRIVE principles for looking after young people’s mental health is to demarcate between treatment and support, between self-management and intervention, and to deliver a whole-system approach, delivered from a much wider group of organisations across communities. i-THRIVE is this vision translated into a model of care. I think the ‘care’ part is what motivates most therapists. But in the population at large there always has to be a structure, a framework, for things to be rolled out widely. So I, for one, am now cheering at the sidelines for the initiative’s success, because nothing is so depressing as knowing there is so little out there for many ‘sub-threshold’ young people in their family contexts that really touches their needs.