Supporting teachers
The help they need to respond to self-harm. Louise Doyle and Susan Dowling explain

Separated by prison
Is there a lack of therapeutic help for children of prisoners? asks Carol Owen

Anticipatory grief
Brenda Mallon on a less-explored area of bereavement

Word for word
A practitioner’s personal response to a given quote. This time, Gill Bell 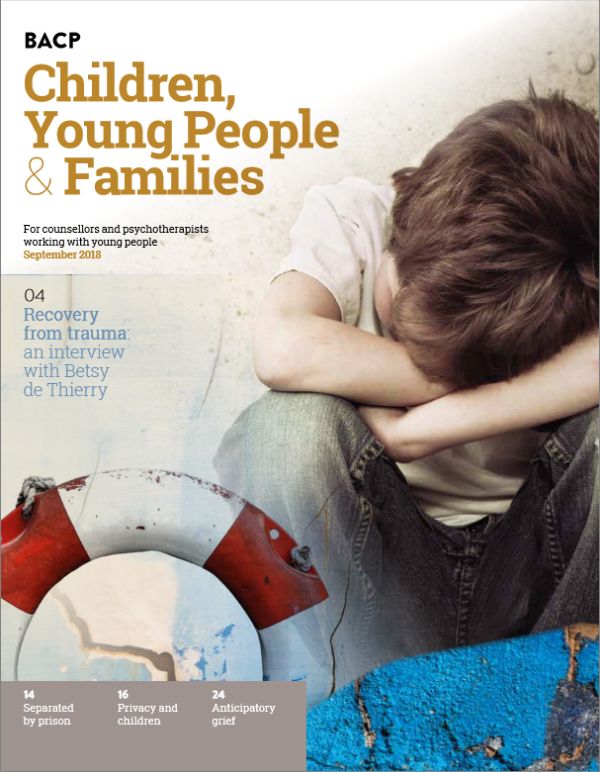 A pdf of this issue is available in the BACP Children, Young People and Families archive

Trauma. It’s become something of a ubiquitous, casually used concept – ‘OMG, it’s sooo traumatic!’ ‘Don’t look at that, you’ll be traumatised.’ On the other hand, phraseology around trauma has become so vague that you wonder what is being referred to – we’re often told to become more aware of traumatic stress as a public health issue (which sounds wise advice). But would that be stress that threatens our ordered existence as we know it, or the usual round of stress that everyone suffers (which, unless it brings dis-order, is not really traumatic)?

So let me think... Have I been truly traumatised? As an adult, yes. I’ve seen my end coming as a car overtook a lorry on a bend (we luckily swerved different ways in a split second); and I nearly drowned after a water ride at a swimming party (the lifeguards had never moved so fast, apparently). Some things you never quite forget; they leave a trace. But you can eventually live with the memory in a kind of mutual accommodation. And that’s the point of me asking myself the question. Because as soon as I refocus on those events, even momentarily, the feelings and sensations attached to them are there if I want. Because they’ve been properly processed. The memory is on the DVD rack in my brain, in such a way that it can be retrieved only if and when I want, but not at all hours, unasked and intrusively.

This reminds us how important it is for a younger person to have help to process their trauma onto the DVD shelf. Many have experienced daily deprivation, migration from a war zone, bombs at a concert, torment by bullies, or abuse of many kinds – the names for which can now trip off our tongue like ice cream flavours. Even one-off distant events witnessed on television or devices (at the time of writing, think Thai football team and cave) can be hugely indigestible to a young child if their stage of development is formative and their experience of life limited. So yes, there is much work to be done to ensure the resolution of trauma in the nation’s young people, much of it occasioned by the adults around them – if that’s not too political a thing to mention.

And these are the real issues of trauma, not the dressed-up, socially splashed-around version.

And because real trauma understanding and resolution seem to be in need of a recalibration, I wanted to home in on it in this issue. Not all of us work in schools or have children, but September does always feel like a new start and therefore a good time to revisit things.

I spoke first with Betsy de Thierry about the centres she’s set up for recovery from trauma. It’s the word ‘recovery’ that’s so interesting here. Not managing, coping, sharing, being understood or merely talking about, but ‘recovery from’. I like that. It’s positive. It’s possible. It’s proactive. It summons up the image of that DVD rack, nicely placed out of sight from a day-to-day perspective. So I commend our interview with Betsy to you, and also the other articles relating to trauma in this issue, by other excellent trauma specialists.

Two more areas of distress came to mind while I was commissioning this issue. One was the multifaceted and ongoing misery / discomfort / embarrassment of children and young people who have a family member in prison, but especially a parent. I found hardly any places where such children could get bespoke help. I asked Carol Owen to write for us about this lack and the need. It also represents an inlet in the counselling territory where we could think of mooring part of our practice if we wished to add a specialism.

The other area was the plight of teachers who come face to face with mental health problems in their pupils, but don’t have the training to respond to or cope with the feelings and situations that ensue. Self-harm is one such issue that many report finding difficulty with, according to research by Louise Doyle and Susan Dowling. They explain this for us and suggest what is needed for teacher support. Any counsellor already on site, or one who is able to ‘offer in’ training to schools, will find another opportunity here to widen the scope of their work.

And talking of widening scope, I will be including, from now on, a teaser about future content, and occasional reminders about recent articles. You can also use BACP’s website to search for further journal content: ‘googling’ is, of course, another ubiquitous, casually used concept that I just neatly avoided writing.