Jennifer Pitt MBACP (Accred) is a school project manager and outreach school counsellor for an inner-city youth counselling service. One of her key areas of interest is eating disorders in young people, and since 2015 she has held Eating Disorders Practitioner status.

The direct link between what people eat, their mental health and general mood is increasingly acknowledged. The aim of this article is to explore the influence of food on how young people feel and address key questions on how diet can make significant contributions towards their mental wellbeing. I will also consider the responsibility of counsellors and psychotherapists towards their young clients, including attending to disordered and concerning eating behaviour that could potentially lead to a life-threatening illness.

According to an independent report, diagnosable mental health issues are thought to affect one in four people in any given year,1 with emotional disorders (particularly anxiety and depression) being the most common conditions affecting young people. However, despite the improved awareness of the increase in mental health support required by young people, just one in four are accessing mental health services, with many parents reporting that their children face long waiting lists, or even worse, have been unable to get a suitable referral to services.2

A 2019 UK-based poll of 2,000 adults, commissioned by the Food Advisory Board, found that almost half had no understanding of Government guidelines of intake of various food groups, nor what a ‘correct’ portion size looks like.3 With potentially millions of adult diets across the UK lacking balance, it is no wonder that poor dietary habits are passed on to young people. A 2016 study of teachers and students aged 12–15, found a great deal of confusion around young people’s understanding of health, alongside a ‘…limited awareness and understanding… of the social and psychological aspects of health’.4 A 2014 study investigating health-related behaviours and mental wellbeing in England found that, ‘…fruit and vegetable consumption was the health-related behaviour most consistently associated with [high] mental well-being in both sexes’.5

An active and ever-growing field of scientific research is attempting to fully elucidate the connection between our mental health and our gut microbiome, which is heavily influenced by the food that we eat. This is otherwise known as the gut-brain axis, and from the research conducted thus far, the results suggest a link between mental health and diet.6 Nutritional therapist Beanie Robinson suggests, ‘Instead of focusing on one specific food… look more broadly at your whole diet and lifestyle. It is important to consider factors like your stress levels, sleep quality, exercise routines, self-care, and your relationships. While a balanced diet is fundamental to a stable and positive mood, working multi-dimensionally to improve balance in more than one area of your life will help bring about more significant change in overall mental wellbeing.’ 7 We know that unhealthy eating patterns can cause mood swings. Within a healthy individual, blood glucose fluctuations may be the primary cause of some mood swings. Glucose is essential to life – it is needed by every cell in our body to function properly. However, it is important that the concentration of glucose within the blood is carefully controlled and properly maintained. Without a steady source of ‘fuel’ in the form of glucose, our minds, muscles and organs cannot function effectively. An imbalance in blood glucose can lead to physical issues including fatigue, dizziness, palpitations, brain fog and sweating. But an imbalance in blood glucose also plays a major role in negative emotional responses, such as irritability, anger, stress, anxiety and depression.

Foods that are rich in carbohydrates, including fruits and vegetables are our primary source of glucose. The carbohydrates we consume are broken down by enzymes in the stomach, thus producing glucose which is absorbed into the blood and circulated around the body, providing energy to our cells. However, an imbalance in blood glucose levels can occur as a result of having irregular meals and consuming an excess of refined carbohydrates, such as biscuits, sweets, cakes and high-energy drinks. When glucose is absorbed by the bloodstream, the hormone insulin helps transport glucose into cells. High-sugar foods can cause a sudden spike in blood glucose levels, particularly when eaten alone, which leads to energy surges and hyperactivity. In response to excess glucose, more insulin is produced and more glucose is taken up and used by the cells. This can result in a blood sugar low (sometimes known as a sugar crash).

A sugar crash is often associated with dizziness, palpitations, fatigue, insomnia, irritability and anxiety. In addition, a sugar crash can also cause the body to release cortisol, a key stress hormone, which further exacerbates the symptoms. In response to irregular meals and an excess intake of sugar, the body’s finely tuned homeostatic mechanisms struggle to maintain a glucose balance, leading to the ‘yo-yo’ effect of sugar cravings and fatigue (figure 1). 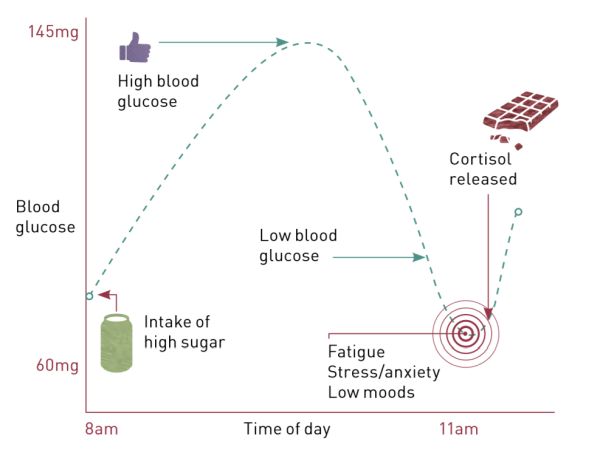 In order to maintain a healthy blood glucose balance, it is important to have regular meals, avoid highly refined and processed foods (including stimulants), increase consumption of unprocessed foods (such as fruit, vegetables and whole grains) and include a source of protein with each meal (figure 2). With this understanding, is it possible that therapists can help facilitate learning, so that their clients can avoid mood swings caused by glucose imbalance, while staying in role and not straying into the domain of a nutritionist? 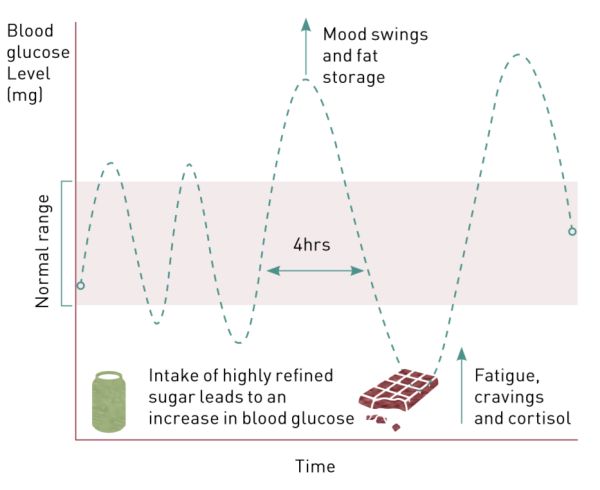 Harrison was a 17-year-old student in his first year of A levels, with a part-time job in a restaurant. He was signposted to therapy by his head of year, who had concerns about Harrison’s frequent and seemingly unprovoked bursts of anger in school. During his assessment for therapy, Harrison revealed that he was feeling both academically and financially pressured and was struggling with intermittent ‘bad mood’. He was applying to undertake a very competitive degree and had taken on an extra A level in order to ‘improve his chances’. Harrison spent most of his time studying or working. Eating regularly and healthily had become a luxury, while burning the candle at both ends was his norm. Both his parents worked for the NHS, doing long and sometimes unpredictable shifts, leaving Harrison to fend for himself at dinner time. Being exhausted, he would often opt for the easiest thing, such as pizza and oven chips, maybe grabbing a cereal bar later if he was still hungry.

Harrison’s day would typically involve waking up late and exhausted, rushing to get ready for school, buying an energy drink and a chocolate muffin on his way to school. The sugar rush made him feel alert for a while, then later he experienced a mid-morning crash and would reach for a sugar-laden cereal bar or similar. Cue the yo-yo effect of irritability and fatigue. Harrison looked forward to Friday and Saturday evenings as he really enjoyed his job as a waiter. He found his colleagues congenial and it gave him a break from studying. Another aspect of his job that he hugely valued was the substantial meal he would eat at work before his shift. And because he had more time during weekend days, he was able to approach his food intake more thoughtfully, also helped by his parents being around to ‘look after’ him. It came as no surprise to Harrison, upon examining his daily food intake, to learn that his irritability, outbursts and feelings of agitation during the week were in sharp contrast to his feeling calm, functioning and settled on the days when he ate well. He referred to himself as ‘unpredictable weekday me’ and ‘chilled weekend me’.

Not over-egging the pudding

Most counsellors, psychologists, psychiatrists and therapists are taught little about the importance of nutrition and its link with mental health. But armed with some basic nutritional education and a mindfulness to inform rather than direct, we can help our young clients to understand that diet is a key contributory factor to emotional distress. Some important objectives of therapy are to facilitate the client’s self-learning and develop new insights, new ways of focusing on their behaviour and adopting new habits. A well-evidenced and tested tool is the ostensibly simple yet powerful food diary. This enables the client to take control by tracking food and mood and making sense of some of the feelings and emotions that may be troubling them. It can help to develop an awareness of cause and effect and encourage young people to become more accountable to themselves.

Food diaries can also shine a light on an incipient eating disorder and it goes without saying that this needs to be sensitively and appropriately addressed. Everyone’s relationship with food changes periodically. We might experience appetite loss, cravings, over-eating or under-eating, but eating disorders are different. Having an eating disorder can be a way of coping with feelings of depression, anxiety, sadness or anger. The things to be alert to are:

A full exploration of eating disorders is beyond the scope of this article, but it is important to highlight that if disordered behaviours are noticed in a young person, therapists must follow safe practice guidelines. This would likely involve a referral to the client’s GP, who might then refer on to a specialist eating disorder service. It is also likely that parental involvement will be required.

I hope I have illustrated the impact of diet on young people’s mental health and emotional wellbeing, and how the therapist can help them to make sense of overwhelming emotions in the context of their daily food intake. Although the connection between what young people eat and how they feel is complex and should not be held up as a panacea for mental health difficulties, it can have a significant impact that should not be ignored. Nicola Terry argues that the significant influence of what we eat on mental health and wellbeing should be acknowledged in the counselling room. Therapy Today, February 2014 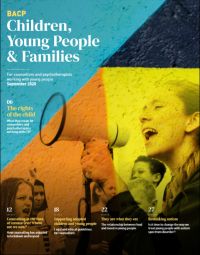