A fleeting moment of ‘noticing’: the balance of presence in team coaching
Erik de Haan

Message from the Chair 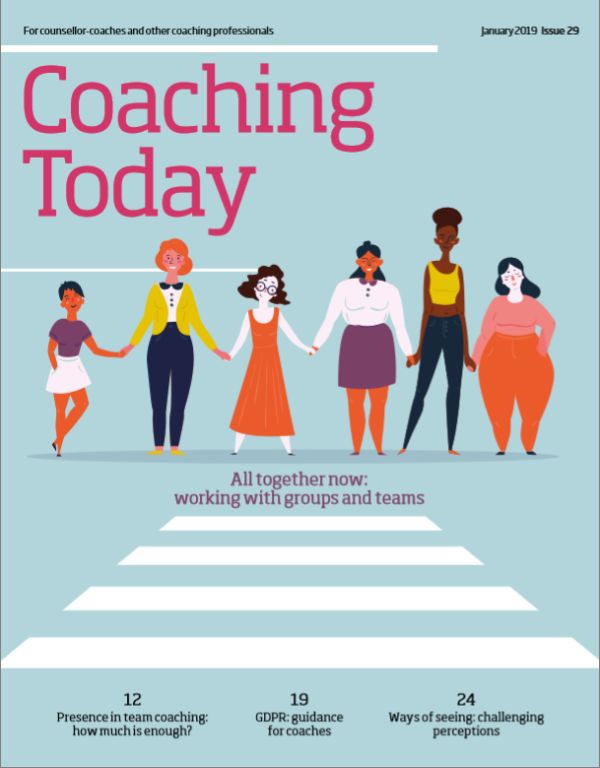 A very happy new year to you all.

As we welcome in 2019, we also welcome our new Chair, Carolyn Mumby, to Coaching Today. In her opening Message, Carolyn reflects on the development of BACP Coaching from its launch and infancy nine years ago, back in 2010, and considers the wave of momentum on which the BACP Coaching division, as a team within a larger organisation, is moving forward into the future. She states that ‘it is inevitable that there are peaks and troughs in the life of any group’, that ‘organisations can change with each individual and group conversation, creating swells that influence the whole’, and that in order to continue making more waves, ‘we need diversity of group membership and opinion’.

I find myself writing this column in the middle of one of the most politically turbulent weeks I have ever known; a week in which the planned parliamentary vote on the Prime Minister’s Brexit deal has been postponed, closely followed by a direct challenge to her leadership by members of her own party. At a time when the UK is feeling increasingly divided and fragmented over our impending exit from the European Union, the words of our Chair strike me as stating something profound about the tension that exists between the needs of the individual and those of the larger group dynamic, whether that ‘group’ be a family, a team, a community, a tribe, an organisation, a country or an entire nation.

The key contributors to this issue share here their various experiences of working with groups and teams, highlighting both the challenges and the opportunities of groupwork. In our cover feature, Judith Plastow describes the power of working with a homogenous group of women in the workplace who are making the transition to becoming working parents, and demonstrates how groupwork, using an integrated coach-counselling approach, can offer participants the flexibility of addressing both emotional and practical issues experienced in the maternity transition. Erik de Haan explores the specific challenge for group coaches of achieving the delicate balance of presence when working with teams in organisations, while Nick Wright introduces his own devised model, based on a four-dimension framework, for helping clients identify how they experience and respond to change in the workplace and the impact it will have, at an individual, team and organisational level.

Elsewhere, David Membrey and Barbara Mitchels respond to the growing need for clarity around the recent changes to the General Data Protection Regulation (GDPR), and provide a comprehensive and useful guide for all practitioners, demystifying the legislation and providing helpful links to further information. Whether you are coaching, counselling or working integratively, operating in private practice or within an organisation, you will find guidance here on working safely, ethically and in accordance with the new legislation.

Times of change and uncertainty bring both challenge and opportunity. I’d love to hear how you, as BACP Coaching members, as practitioners and as human beings, are responding to the impact of social, political and global change. How is it affecting your clients, and is it changing the way you work, and with whom? If you have an idea for an article and would like to share your views with other readers, drop me a line and let’s have a conversation.