Lifted by lifting!
Michelle Oldale charts her journey to self-care via the strength and conditioning fitness programme, CrossFit

Redefining the menopause
Cordelia Nevin Galgut, a practising psychotherapist who is herself menopausal, raises the need for us to think differently about this phase in a woman’s life 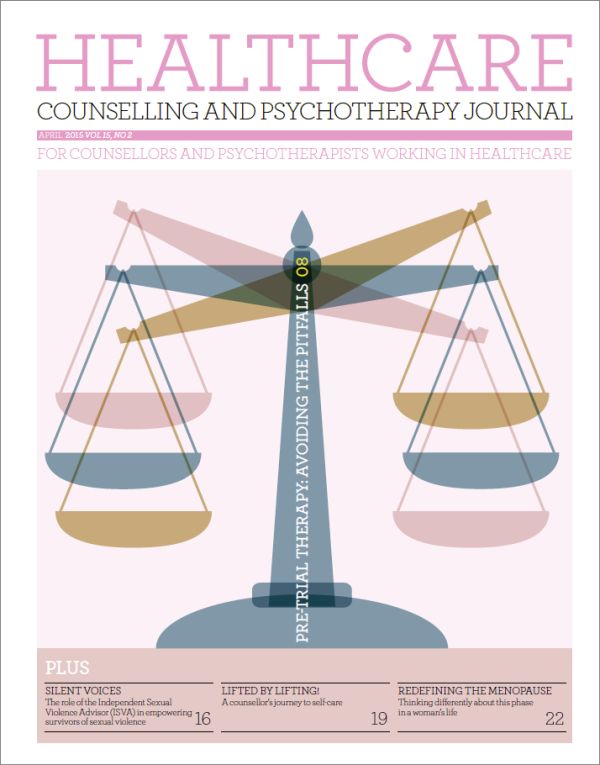 There has been much media coverage of trials of historic sexual abuse, often with a focus on those prosecuted. In every such trial, there is a person for whom giving evidence has required them not only to disclose, but also to go through with bringing the case to court and all that involves.

In the first of three linked articles in this issue, Peter Jenkins, Joanne Muccio and Nicky Paris consider the issues involved in providing counselling and psychotherapy for such vulnerable witnesses. Pre-trial therapy (PTT), as it is known, has itself gained prominence in the media of late, and there has been a seeming reluctance to provide it on the grounds that it might undermine prosecution evidence. Practice guidance by the Crown Prosecution Service (CPS), however, makes it clear that both child and vulnerable witnesses can receive PTT before and during a criminal trial of their alleged abusers. The authors explore the implications for therapists providing PTT, and among the sources they consider is a survey of practitioners’ experiences and views. Research into the parallel experiences of clients is now being planned.

Paula Doran’s article reports her research, which explored the impact on therapists practising in sexual trauma. In reflecting on her findings about the risk inherent in this work for both client and counsellor, Paula asks for a more open dialogue about the personal consequences to therapists of working in this area.

The third of our linked features, written by Helen Leach, outlines the role of the Independent Sexual Violence Advisor (ISVA). ISVAs aim to support and empower survivors of sexual abuse and violence when engaged with, or considering, criminal proceedings against their perpetrators. Helen’s piece is titled Silent Voices, in an appreciation of the difficulties encountered by people when speaking out. Historically, a victim-blaming culture has made it difficult, if not impossible, for survivors to bring cases to court. Now, with the help of an ISVA, survivors can be provided with a clearer insight into the reporting process and the space to explore feelings.

Whatever area we work in as therapists, looking after ourselves is an important part of what we do. Elsewhere in the journal, Michelle Oldale charts her journey to self-care via the strength and conditioning fitness programme, CrossFit. Michelle writes about how taking part in this physical activity programme has transformed self-care in her life as a psychotherapist, and substantiates this with links to ideas from psychotherapeutic literature and beyond.

As the author of two books on breast cancer, Cordelia Nevin Galgut has made positive use of her own experiences to throw light on issues for both therapist and clients, and her article in this issue is no exception. ‘Redefining the Menopause’ challenges myths about this phase in a woman’s life, and suggests there is a need to acknowledge that menopausal symptoms can be challenging to manage for both clients and therapists.

Finally, the BACP Healthcare Executive looks forward to welcoming you to the Practitioner’s Conference in Leeds on 24 April. The event is co-hosted by BACP Healthcare with BACP Coaching, BACP Spirituality, and BACP Workplace. The division will be represented this year by our Chair, Zubeida Ali, and Executive Committee member and journal contributor, Neville Tomlinson, so do seek them out to say hello and share your experiences and views.