The human face of an RCT (free article)
Sara Perren, Stewart Richmond and Hugh Macpherson reflect on providing counselling for clients with moderate to severe depression in a randomised controlled trial

Has the pendulum swung too far?
Can the therapeutic relationship survive the clamour for evidence-based practice in counselling and psychotherapy? Asks Neville Tomlinson

Psychodrama and CBT
The two therapies have much to offer one another, writes Bernadette Hammond

Being alone at Christmas
In a personal piece, Elaine Davies reminds us that loneliness can affect anyone 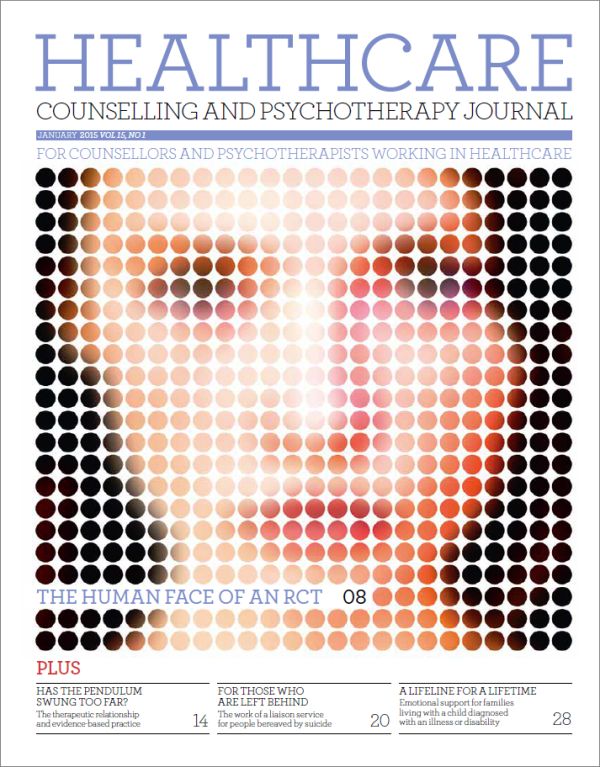 What is your view of randomised controlled trials (RCTs)? Do they produce meaningful findings when it comes to measuring the efficacy of psychological therapies? Or are they at best impersonal and at worst an exercise in manipulating statistics to produce findings supporting the bias of those with vested interests?

The latter was the view of several counsellors before they took part in the Randomised Controlled Trial of Acupuncture, Counselling and Usual Care for Depression (ACUDep). The study, carried out at the University of York, was designed to compare the clinical and cost-effectiveness of acupuncture, counselling and usual care for moderate to severe depression, and is the subject of our lead article this issue.

As part of the trial, Sara Perren, Stewart Richmond and Hugh MacPherson took the opportunity to look at the experiences of counsellors participating in it, hearing about what they learnt and ascertaining whether their perspectives on RCTs (both methods and results) were changed by their participation.

In his article, Neville Tomlinson also takes on the subject of research, asking whether the emphasis on the need for counsellors and psychotherapists to provide evidence means the therapeutic relationship is getting lost. In a challenge to the superiority of the RCT as a way of measuring psychological therapies, Neville reminds us that the research we are considering is gleaned from the life stories of our fellow human beings, and that ultimately, only one person – the client – can determine their personal healing process and its success and sustainability.

Elsewhere in this issue, we feature two examples of good practice driven by innovation in services. Anne Embury describes the work of a liaison service for those bereaved by suicide. The service works in partnership with the local IAPT team so, if post-traumatic stress disorder (PTSD) is identified, the liaison service can pass referrals to the IAPT therapists. Anne also details the service’s ground-breaking bereavement by suicide groups. Unable to source details in the UK about any groups run on the same lines, Anne applied for, and was awarded, a fellowship by the Winston Churchill Memorial Trust which allowed her to travel to Australia and New Zealand to look at the delivery of evidence-based suicide bereavement groupwork.

In our second best practice feature, Sally Flatteau Taylor outlines the work of The Maypole Project which offers emotional support to families living with a child diagnosed with an illness or disability. The project is person centred – offering immediately available, flexible and continually accessible services. In Sally’s words, it is ‘a model based on a flexible provision of support – that is, support when families want it, for as long as they want it’.

If your service can offer readers inspiration through good practice, I’d love to hear from you with a view to writing an article for us. Please get in touch with me at the email address below.