The dust still shows no sign of settling in the aftermath of the Francis Inquiry into the Mid Staffordshire NHS Foundation Trust. Barely has the long-running series of reports and recommendations been made public than the central claim of large numbers of ‘preventable deaths’ is being challenged as being a combination of media hype and the use of an overly sensitive statistical measure, ie the Hospital Standardised Mortality Ratio (HSMR).

Some key aspects of the Francis Report, however, remain unquestioned, namely the conclusion that ‘the system as a whole failed in its most essential duty – to protect patients from unacceptable risks of harm1.’ In part, this is attributed to the persistent failure of an extensive internal system of checks and balances in what is one of the most heavily regulated healthcare systems in the world. Professionals, in the main, did not cry wolf. Poor or abusive healthcare came to light largely as the result of external campaigning by patient and family pressure groups, such as Cure the NHS, led by Julie Bailey, daughter of an elderly patient who died in the hospital’s care.

Sample of concerns raised by the Francis Inquiry:

Whistle-blowing or a 'duty of candour'?

At one level, the Francis Report also points to the apparent failure of whistle-blowing as a system. ‘Whistle-blowing’ is the term given to employee action, taken under the Public Interest Disclosure Act 1988 (PIDA), whereby staff can make a qualified disclosure of fraud, malpractice, etc to a designated officer and be protected against subsequent harassment, or dismissal, by management. In the Mid Staffs case, it is clear that many members of staff did voice their concerns, both individually and collectively, but action was not taken, tending to discourage any further ongoing reporting of issues1. One whistle-blowing report was made to management, ignored and then taken to the Royal College of Nursing (RCN), but left unresolved1. In the run-up to the NHS Trust achieving Foundation Trust status, this critical report was not revealed to the regulators. This led to one of the Francis Report’s main recommendations: a positive ‘duty of candour’ on healthcare directors to reveal adverse incidents in any such submissions.

So why did whistle-blowing not work at Mid Staffs? Andrew Lansley, then Secretary of State for Health for the Coalition Government, referred to ‘a culture of fear in which staff did not feel able to report concerns’1. This certainly seems to be one factor, affecting many staff currently working in the NHS. The whistle-blowing pressure group, Public Concern At Work (PCAW), claims that one third of the calls they receive are from health and social work sector staff3. However, recent surveys by the British Medical Association (BMA) amongst doctors in 2010, and by the RCN in 2013, suggest that 40 per cent of doctors are too frightened to report their concerns, and 84 per cent of nurses are worried about potential victimisation if they were to report unsafe staffing levels, or patient safety issues4,5.

So what relevance, if any, does whistle-blowing have for counsellors and psychotherapists in the NHS? For some, this may seem a rather specialist employment issue, somewhat remote from their everyday therapeutic practice, bound up with IAPT, CORE, and the other acronyms of a fast-changing NHS. Yet whistle-blowing does have a direct relevance for NHS staff counsellors, for counsellors as employees of the NHS, and as placement managers for university and college counselling students within the NHS.

Issues for counsellors and psychotherapists, as practitioners and trainers

via their therapeutic practice:

as an employee of the organisation:

as placement managers for university or college counselling training courses:

Whistle-blowing provides protection under the law for a very specific group of employees, rather than extending in a general way to any person with concerns about poor practice. PIDA 1998 is part of employment law, and provides a degree of protection from harassment, or dismissal, by management subsequent to making a ‘qualified disclosure’ to a person authorised by the same organisation to receive information about fraud, malpractice or abuse. However, critics of the Act have argued that, in reality, it provides very little real protection to staff making whistle-blowing disclosures in the face of any management determined to cover up abuses. Rosemary Pattenden, a leading commentator on this rather niche area of employment law, has commented that: ‘Such is the convoluted nature of the Public Interest Disclosure Act that the employed professional may want to take legal advice before making a disclosure7.’

So what, if anything, is wrong with current whistle-blowing provision? Eileen Chubb, who brought the first case under PIDA, about alleged abuses at a care home, was then blacklisted and now works as a cleaner. She claims that the Act ‘is so badly written that whistle-blowers don’t stand a chance8.’ This is echoed by Lord Touhig, who was heavily involved in the early drafting of the original Bill: ‘People think they have stronger protection under it than they actually do… It is tired, frayed at the edges and needs to be thoroughly reviewed9.’

In fact, changes in PIDA have recently been implemented by the Government. Under the Enterprise and Regulatory Reform Act 2013, whistle-blowers are now protected from victimisation by co-workers, as well as by management. The test of making a disclosure ‘in good faith’ has been removed, and replaced by a ‘public interest’ test, namely the employee has to show that they reasonably believe the disclosure to be in the wider public interest. These changes, however, might appear to be subtle tinkering with the finer points of the law, rather than the larger-scale revamping felt to be necessary by many vocal critics.

However, these relatively minor changes to PIDA are likely to be overshadowed by more sweeping changes to Employment Tribunals. There have been major changes to Employment Tribunal procedures which deal with whistle-blowing cases as part of conflicts over employment law, which could have a major effect on its working in the future. Whistle-blowing cases heard at Employment Tribunals have risen tenfold from 157 in 1999, when PIDA came into force, to 2,000 in 2010 (see Figure 1). Applicants will still have to go through compulsory ACAS conciliation as a first stage, prior to going to a Tribunal. They will also now have to pay a fee of up to £1,200 in order to have their case heard, with compensation being capped at £74,000. The statistics do not paint an encouraging picture of outcomes at Tribunal, with a bare three per cent of recent cases counted as ‘successful’. 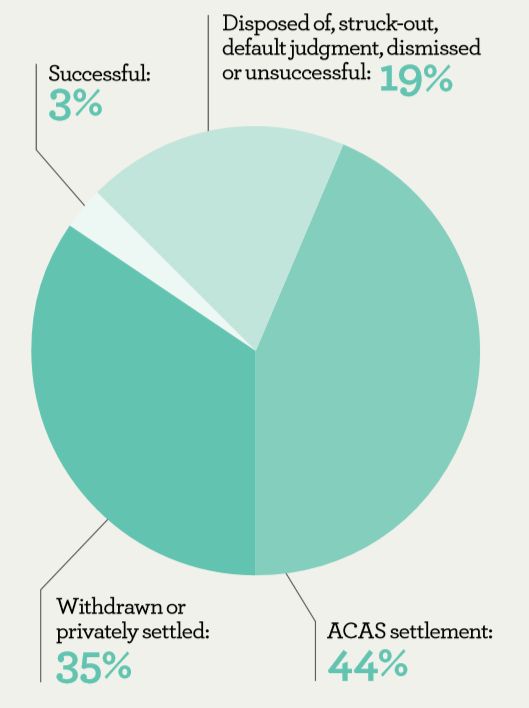 It therefore remains to be seen whether the recent changes in Employment Tribunal procedures will have a positive, or a dampening, effect on future whistle-blowing claims. Given these criticisms and uncertainties, the pressure group Public Concern At Work has now set up its own commission on whistle-blowing, due to report with recommendations by the end of 2013.

Cultural change in the NHS

Perhaps there are inherent limitations in relying upon the current whistle-blowing system itself to address and correct major, systemic problems within the NHS, or in any large public sector organisation. For example, ‘confidentiality clauses’ in redundancy packages have reportedly been used to buy silence from departing unwelcome critics, with 600 former NHS staff receiving £15 million in such payments10. In addition, staff transferred out of the NHS to the private sector as part of the Any Qualified Provider (AQP) reforms, will generally find that they are not covered by Department of Health whistle-blowing guidelines or protection. In wider discussions, there is concern that there has been an over-reliance on whistle-blowing by agencies such as the Office of Fair Trading, acting as a ‘light touch’ form of regulation when more active intervention may well be justified.

To return to the Francis Report, beyond the issue of whistle-blowing, what was seen to be essential was ‘a fundamental culture change’ within Mid Staffs NHS Foundation Trust. This cultural change, according to the author, requires openness, transparency and candour, or the willingness to learn from mistakes. One straw in the wind here might be the proposal to introduce open forums within the NHS to openly review, learn from and improve current practice. Called Schwartz Center Rounds®, these will be introduced to 55 hospitals, with initial Department of Health funding of £650,00011. They are intended to provide an opportunity for staff to discuss patient care issues in a confidential and non-hierarchical setting. This more open approach is one also recommended by Stephen Bolsin, whistle-blower and former anaesthetist at the Bristol Royal Infirmary during 1988-199612.

What happens to whistle-blowers?

These approaches offer an alternative way of trying to ‘open up’ the sometimes problematic culture of the NHS. They may prove more productive in the long term than relying on the heroic, but often isolated, figure of the whistle-blower to raise concerns., At present, whistleblowers enjoy the somewhat uncertain protection offered by PIDA and by Employment Tribunals. Asked about the personal consequences of whistle-blowing, Paul Moore, a former executive at HBOS bank, dismissed in 2004, made the following points13: ‘Whistle-blowers speak up because they love the organisation they work for, then they experience pretty much the same sequence of events.’ Moore went on to state the possible consequences:

‘1 They are ignored.
2 They are demeaned.
3 They are dismissed.
4 After they speak up, they are publicly rubbished.
5 Everybody, even the people who were their friends, scatter like the four winds.’

Or as Seth Freedman, sacked whistle-blower from the wholesale gas pricing industry, rather ruefully put it13:

‘I would do it again, but only just.’

Peter Jenkins is a senior lecturer in counselling at the University of Manchester and author of Counselling, psychotherapy and the law (Second edition. Sage; 2007).