BPD: mental illness or misogyny?
Is borderline personality disorder just a diagnosis to label women whose feelings and behaviours do not meet the ‘norm’?

Working with brain damaged clients
What are the difficulties and dilemmas of working with clients whose brains have been damaged by illness or physical trauma?

In practice
Kevin Chandler: The limits of care

In the client's chair
Emma Munro: Getting on with the job

The art of coaching
Linda Aspey

Day in the life
Maggie Morrow 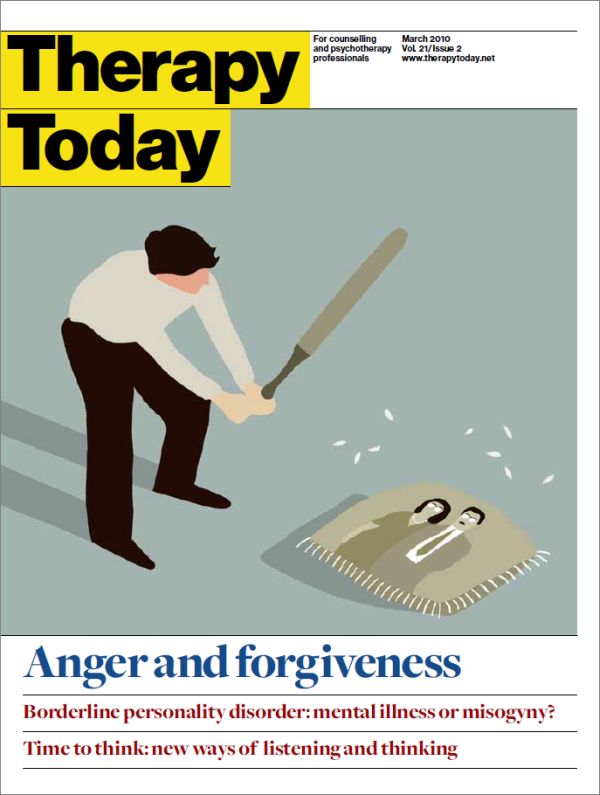 I have always been curious about the Hoffman Process and, having learnt more about it, I think it’s an interesting subject for therapists: an intensive eight-day residential course where you are cut off from the outside world, and together with a group of 23 others are lead through 100 hours of personal exploration using techniques drawn from all the major therapeutic approaches. Hoffman candidates go through a process of awareness, expression, forgiveness and new behaviour.

One of the approaches, which is associated with expression and which inspired our illustrator for the front cover, is bioenergetics, whereby people are encouraged to take out their suppressed anger using a wiffle bat and cushion. On the Hoffman Process the anger is directed towards the negative traits of one’s parents that get passed on from one generation to the next. It differs from a lot of psychotherapy in that it deliberately encourages people, once they have raged at the negative parents of their childhood, to bury the hatchet and move to forgiveness. It is apparently not uncommon for people who have completed the Hoffman Process to make amends with parents they have not spoken to for 20 years.

In the light of news that the next edition of the ever-expanding Diagnostic and Statistical Manual of Mental Disorders will include new diagnoses for children who are often grumpy and throw fits – TDD or temper dysregulation disorder with dysphoria – and those who find maths hard – ‘dyscalculia’ – Gillian Proctor’s deconstruction of borderline personality disorder (BPD) is timely. BPD was first introduced as a diagnosable personality disorder in 1980 and is now by far the most common of the personality disorders. As there is no physical test to establish the presence of BPD, all that professionals have to go on is behaviour and the opinions the patient expresses. Given that 75 per cent of those diagnosed with BPD are women, Proctor looks more closely at what are considered to be ‘inappropriate’ emotions and behaviours and asks whether BPD is in fact another example of a tendency to label as madness the strategies some women use to survive.