Children at risk: a confidential space?
There is now a strong legal and ethical case for therapists working with children and young people to maintain high levels of confidentiality

The net generation
Technology is becoming more and more a part of everyday life and as it develops, so does the potential for its use in therapy

The challenge of multi-agency work
How has multi-agency practice changed in the last 10 years and how is it benefiting children and young people?

The art of coaching
Linda Aspey 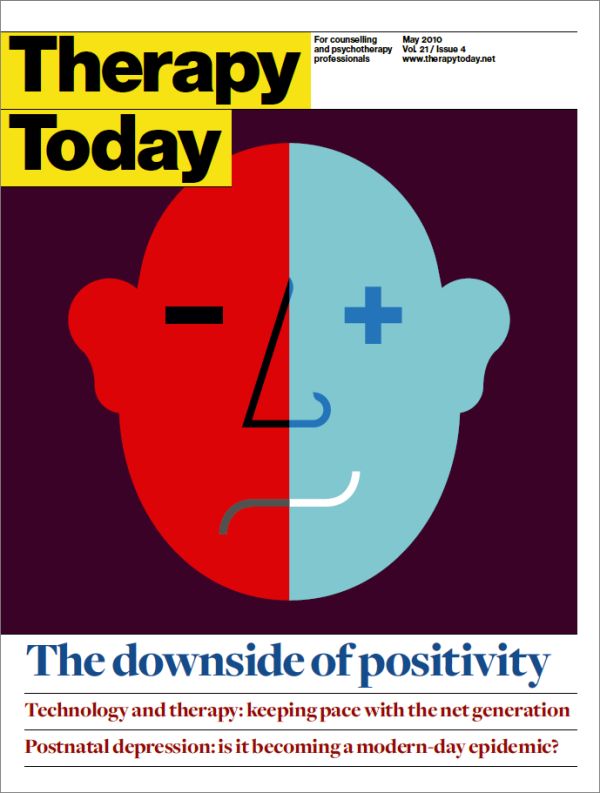 Not all articles from this issue are available online. Members and subscribers can download the pdf from the Therapy Today archive.

I must confess to having been quite taken with the whole idea of positive thinking over the last few years. I attended a talk by Martin Seligman, the founder of positive psychology, took myself off to a ‘Happiness’ conference and even stuck a list of ‘Happiness tools’ on my dressing table to remind me every morning to smile at people, count my blessings and do more exercise. So Barbara Ehrenreich’s recent book – Smile or Die, How Positive Thinking Fooled America and the World – came as a bit of a shock.

Ehrenreich’s main complaint with what she sees as the positive thinking ideology of American culture is that it encourages us to constantly censor our thoughts, deny reality and blame only ourselves for our fate. Positive thinking is, in her view, just as delusional as negative thinking: in both cases there is an inability to separate emotion from perception and a willingness to accept illusion for reality.

In the extract from her book which we publish in this issue, Ehrenreich builds a very convincing argument that positive thinking, the refusal to see things as they really are – let alone to envision the worst – has had devastating consequences on several levels. America’s unpreparedness for the events of 11 September 2001 and the financial meltdown of 2007, she relates to the tendency of the American leadership to hold fast to the image of an invulnerable nation and an ever-booming economy.

Pointing out the irony that the positive psychology movement has grown over the last two decades while the icebergs sank and the forests have been falling, Ehrenreich rejects Martin Seligman’s notion that, as a species, we can finally let down our guard as ‘goods and services are plentiful’; that anxiety and pessimism are ‘unhelpful vestiges of our Paleolithic past’ when our ancestors scrambled to avoid predators, flood and famine. Instead of comforting ourselves with positive thinking, we need to shake off self-absorption, and take action against the very real threats we face.