Coaching: one of the fastest growing industries in the world
Coaching is now a worldwide phenomenon that has grown organically from various fields of self-development. As BACP launches its new coaching division, Julia Bueno asks what does the term ‘coaching’ now cover and how does it differ from therapeutic work?

Parent empathy training
Having a diagnosis of autistic spectrum disorder hugely increases the risk of psychological distress. Tim Lacey explains how a systemic way of working with families can help clients.

In the client's chair
Orla Murray: The therapy maze

In training
Alex Erskine: Permission to be curious

Day in the life
Tony Buckley 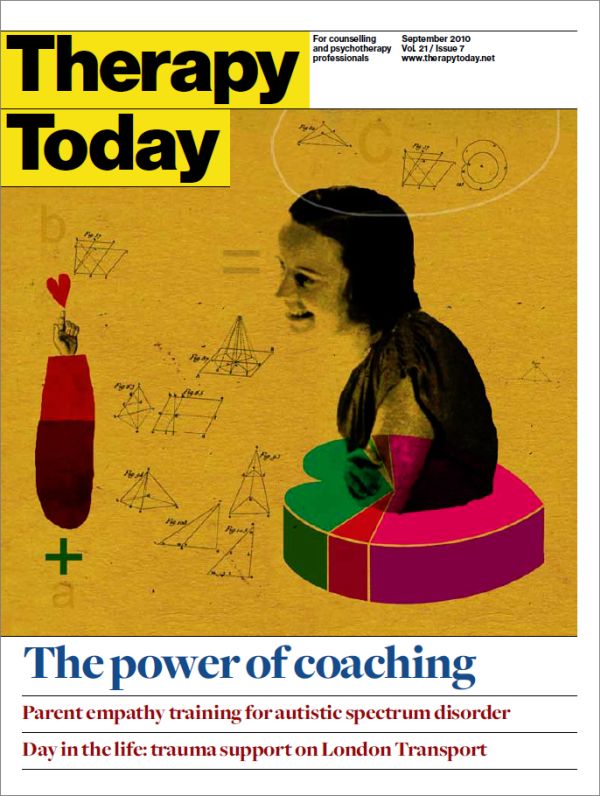 Only a few weeks ago controversy over our potential entry to the Health Professions Council (HPC) was continuing to rage but during the summer the picture has changed again.

Now Anne Milton who holds the brief for professional regulation has said that the new Government has made no decision on whether or not to endorse the previous Government’s policy on regulation. Nor are there any specific HPC proposals for counselling and psychotherapy, while the generic standards of proficiency are under review. And as BACP Chair Lynne Gabriel explains in her column, the General Social Care Council is to be abolished and its social worker registrants moved to the HPC. Primary legislation will then be required to change the HPC to accommodate the social work professions. So whatever happens next, it is clear that counsellors and psychotherapists will not be regulated by the HPC as it currently exists.

We take a look in this issue at how the coaching profession is developing and why BACP felt that the time was right to launch a division for members who practise as coaches. I have wondered whether coaching might have been a casualty of the recession but the law of demand doesn’t seem to apply to coaching. Like counselling, coaching has diversified and adapted and now thrives in many varied contexts, and the familiar question: ‘What’s the difference between...?’ is now being hotly debated, in the relevant places, in relation to counselling and coaching.

Many thanks to everyone who wrote to us in response to our request for new columnists. It was heartening to have so much interest and so many good and interesting writers to choose from. In this issue we join client Orla Murray on her journey in psychodynamic psychotherapy and student Alex Erskine as he starts the second year of his integrative counselling diploma.