ADHD – passport or label?
Catherine Jackson explores the recently reignited debate about ADHD in children, its diagnosis and how it should be treated.

On the edge of another culture
Karen Stuckey describes the culture clash of working as a volunteer in Sri Lanka.

In the client's chair
Julie Storey: Fighting to be heard

In the supervisor's chair
Rosie Dansey: Power and authority

The researcher
Barry McInnes: Written in the genes

The interview
Alessandra Lemma: In praise of pluralism

How I became a therapist
Jelena Watkins

From the chair
Amanda Hawkins: A fruitful 12 months of change 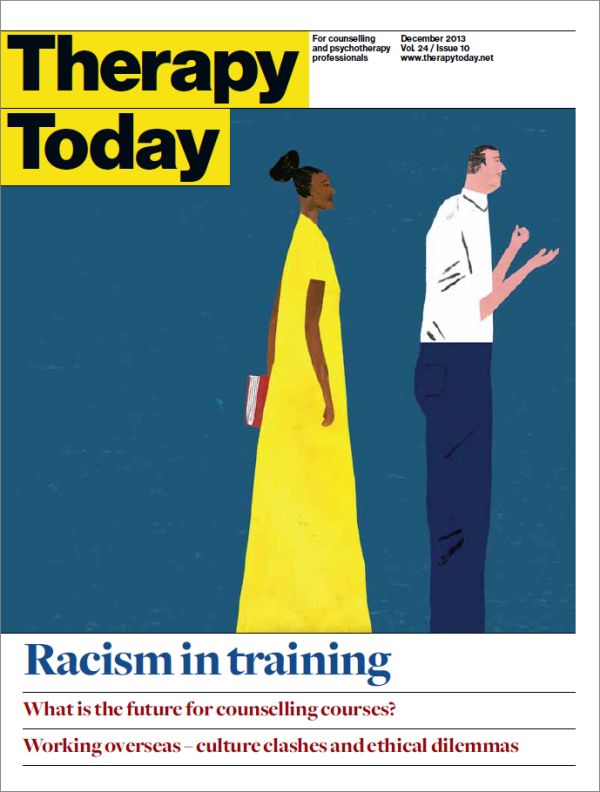 Not all articles from this issue are available online. Members and subscribers can download the pdf from the Therapy Today archive.

Earlier in the year we featured an interview with Eugene Ellis, the founder of the Black and Asian Therapist Network (BAATN) on why he became a therapist. He commented that there are still not enough practitioners who feel confident about working with the interpersonal dynamics of race and cultural issues, which means that, for some Black and minority ethnic clients, therapy can be a bit hit and miss.

Niki Cooper, a counselling trainer, read our interview with Eugene and signed up for BAATN’s ‘Black issues’ workshop. In a bravely honest conversation with Eugene that we publish in this issue, Niki explains her journey as a white middle-class trainer from a position of unexamined commitment to equality – albeit one where she was sometimes anxious about saying the wrong thing or exposing her ignorance if a person of colour named the difference between them – to a realisation that on training courses that she was running Black students were feeling unable to speak about their experience of the course. Despite the fact that the course included a thread on diversity and difference, people were still feeling excluded, not understood and not heard, and unable to express this.

As Eugene explains, from his experience of trainees and colleagues, having a weekend module on difference and diversity doesn’t really address what is going on personally between students and trainers in, for example, group process or the course as a whole. In his view, counselling and psychotherapy trainings have not really begun to address how racism affects the therapeutic dialogue. Furthermore, he says, the way that person-centred and psychodynamic theory are presented on training courses is colour-blind – ie devoid of the experience of race and culture. He looks forward to a time when an organisation like BAATN will no longer be needed and what he calls a ‘rainbow coloured therapeutic community’.