Whose body is it anyway?
Catherine Jackson asks if cosmetic surgery is ever a simple matter of consumer choice.

Self-harm: the solution, not the problem?
Self-harm can be a vital coping mechanism for some young people, argues Lynn Martin.

The depths of depression
Alan Pope asks if private practitioners can offer more to clients with depression.

In the client's chair
Ben Lawrence: Recovery and repair

In training
Mel Perry: So much more to learn

Talking point
Elaine Davies: We are all on the same side

How I became a therapist
Taiwo Afuape

From the chair
Amanda Hawkins: The rocky road to adulthood

In conversation
Roy Moodley talks to Colin Feltham about traditional healing practices and why human societies can only benefit from a plurality of therapeutic models and approaches. 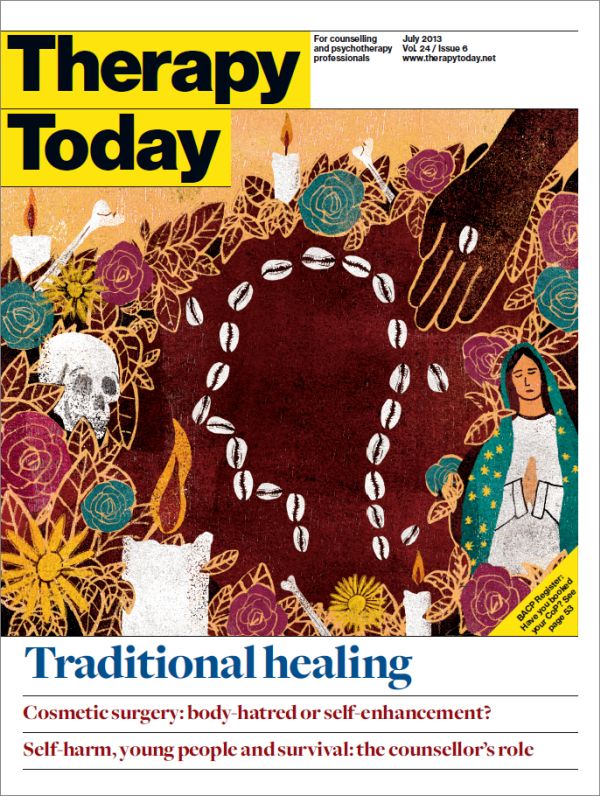 As counsellors and psychotherapists in the Western world hone their techniques, practitioners of Voodoo, Santeria and other spiritual practices around the globe are busy healing bodies and souls by means of consultation with ancestors,  rhythmic fire dances and rituals; or by interpreting ‘floor x-rays’ (the throwing of bones or shells to reveal the shadows and silhouettes of a troubled self) – rather different from brain imaging and neuroscience! As Roy Moodley reminds us in his fascinating article on spirit-based healing in the Black diaspora, many of these practices have been going on since the dawn of time.

I remember being at a conference several years ago when one of the delegates asked the panel where traditional healing practices fitted into IAPT, explaining that for some clients these would be more appropriate. I guess one problem in including such practices would be the lack of a robust evidence base although, in Roy Moodley’s view, clients vote with their feet and the fact that many have been around much longer than manualised therapies must say something about their value.

Some spirit-based practices can certainly be challenging and alien for a Westerner to think about – particularly those that involve animal sacrifice – but, because of this, as Roy suggests, the rich traditions of other cultures have become marginalised and demonised. There are Diaspora communities in the UK, he argues, who may not get their mental health needs met within the limited paradigm of Western counselling and psychotherapy. And this is because the idea of spirituality is largely missing from our work (a theme also picked up in Rachel Freeth’s ‘In practice’ column this month). However, using the current integration of mindfulness into CBT as an example, Roy anticipates and hopes for further integration of traditional healing into the psychological therapies.