Counselling in UK secondary schools
Mick Cooper reports on a review of progress in counselling in schools and some important developments for the future.

In practice
Rachel Freeth: Walking a path to the unknown

In the client's chair
Jason Swinhoe: I'm just much more everything

In training
Mel Perry: Finding the positives in process

The researcher
Barry McInnes: Bettered by Botox and beer

How I became a therapist
Dilek Güngör

The interview
Joanna Moncrieff: The meaning in madness

From the chair
Amanda Hawkins: Paving the way to the future 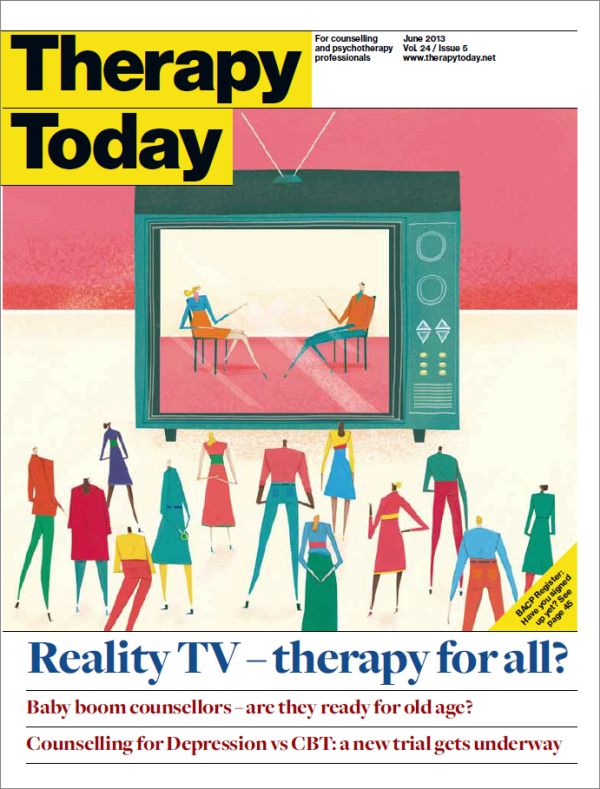 I recently watched an episode of Hoarders on BBC1 and found it fascinating viewing. I could see how watching the subjects – both isolated individuals in their old age whose pathological collecting and saving of possessions was preventing them from cooking in their kitchens and even accessing their beds to sleep in – finally getting help and opening up about their problem could be a cathartic or therapeutic experience for the audience.

There has certainly been an explosion in TV programmes with a therapeutic element in the last few years, from Celebrity Rehab to Dr Phil and even Supernanny. So is this a good or a bad thing? There has been much debate about the ethics of inviting troubled and vulnerable people to share their problems and undergo therapy in front of an audience of millions. As far as BACP’s Ethical Framework is concerned, I don’t know whether therapy as a spectator sport could ever be fully justified; many would argue that a genuine therapeutic session cannot take place in the presence of a camera.

Jenny Hamilton, author of our cover feature this month, is more interested in the potential of this genre of reality TV to normalise the discussion of emotions and to offer viewers access to therapeutic ideas in their own homes. Jenny feels that therapy is the preserve of the middle classes, both as clients and practitioners, and quotes Dave Mearns, who has said that counselling is probably only seen as a ‘relevant possibility by about 10 per cent of troubled people’, stressing the need to ‘actively explore creative models for taking the profession to the other 90 per cent’. While working in community settings with disadvantaged women who do engage with reality TV therapy shows, Jenny realised that, for many people, such programmes are the only contact they have with therapy and therapeutic ideas and so have a real potential for widening participation. We would be very interested to hear your views.