Working with cult survivors
Gillie Jenkinson reveals how cults take over their members’ minds and lives.

When parents aren’t good-enough
Joanna North explores how therapists can help children process the knowledge that their parents couldn’t look after them.

In the client's chair
Angela Smith: A fish out of water

In training
Mel Perry: Learning from my clients

How I became a therapist
Eugene Ellis

From the chair
Amanda Hawkins: Direction of travel

BACP awards
Walking the talk: Hospice in the Weald

The interview
Colin Feltham talks to Gillie Jenkinson about her personal experience of joining a cult, what defines a ‘cult’ and working with cult survivors 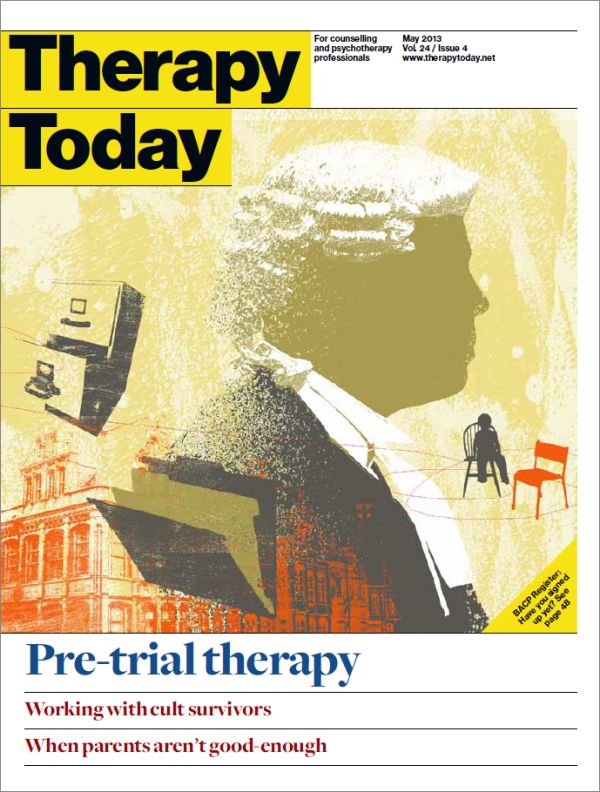 I am grateful to Peter Jenkins for guiding us through the complex area of pre-trial therapy, an area that we will surely be hearing much more about given the number of arrests of ageing celebrities currently being made for historic sexual abuse following Operation Yewtree. As Peter explains, pre-trial therapy is viewed in the criminal justice system as problematic because of its potential to ‘contaminate’ evidence.

Despite there being clear guidance on pre-trial therapy for child and adult witnesses, in practice there seems to be much confusion about this. For example, in the recent tragic case of Frances Andrade who killed herself during the trial of her former music teacher, Andrade was allegedly warned by the police against having therapy even though she was clearly a reluctant and vulnerable witness – her husband has said that she had been completely distraught at the idea of the past being churned up.

In many cases, Peter writes, there is a lack of awareness even among therapists as to the specific requirements of pre-trial therapy. One mother of a six-year-old boy who was having nightmares and trouble sleeping was told by the police that her son could have counselling if he was really ‘falling apart’ prior to the trial. When she tried to engage a counsellor to work with him, however, they all refused saying that the police would not like it.

From the therapist’s point of view there is the legal context of the therapy to consider, not least the issue of confidentiality – or, rather, the lack of it. Not only may the police and Crown Prosecution Service need to be kept closely informed but both the prosecution and defence solicitors have access to the therapist’s records. However difficult and alien this work may be to counsellors, it would seem also to be terribly important if the voices of victims are to come to the fore.