Inside out: two views of a prison placement
Jill Swindells and Orville Hall reflect on their experience of counselling in a male prison.

Cultivating presence
Counsellors need to know how to be with a client, not just what to do, says Manu Bazzano.

The healing power of unconditional love
Unconditional positive regard should apply to self as well as others, argues Elizabeth Freire.

In practice
Rachel Freeth: Who cares about the carers

In the client's chair
Caroline Tregoning: Learning to live with loss

In the supervisor's chair
Rosie Dansey: After they qualify - what next?

The researcher
Barry McInnes: Born to be an introvert

Dilemmas
When the client is not alone

The interview
Judith Beck: Growing up with CBT

How I became a therapist
Rima Sidhpara

From the chair
Amanda Hawkins: Changing hearts and minds

In conversation
Colin Feltham interviews sex therapist Paula Hall about sex addiction, the moralism that often distorts debates about working with sex addiction and the skills needed to work with this client group. 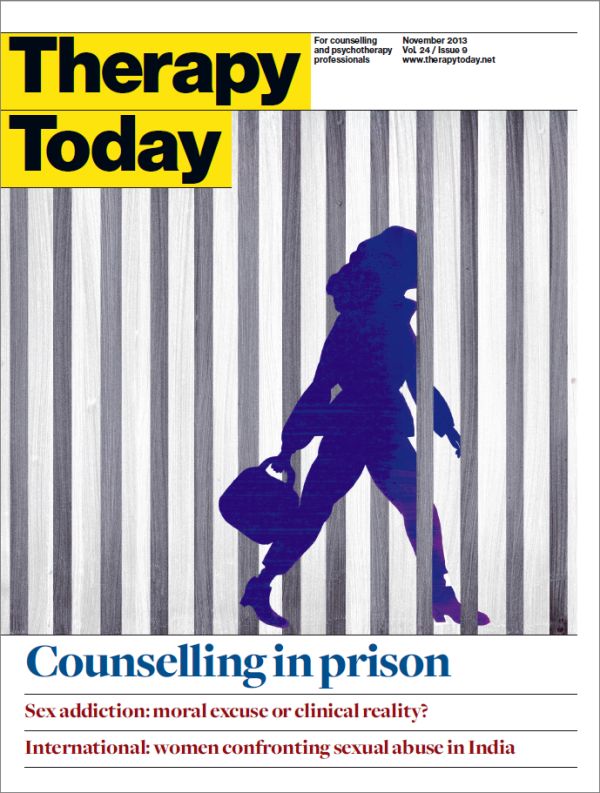 Earlier this year BACP set up a criminal justice group of like-minded people such as Sue Bailey, President of the Royal College of Psychiatrists, and Juliet Lyon, Director of the Prison Reform Trust, to explore the current provision of emotional and psychological support for women in prison and to look at ways in which our sector could campaign for better alternatives to custody for women offenders and more provision of therapeutic support.

As BACP Chair Amanda Hawkins explains in our news feature, it isn’t that male prisoners don’t need this too but we should focus our efforts where we could make the most difference. As Amanda says, so many women offenders have mental health issues and histories of trauma (78 per cent show some level of psychological disturbance).

The statistics are shocking: for example, 47 per cent of all incidents of self-harm in UK prisons in 2010 were among women, even though they comprise only five per cent of the total prison population. Clive Chatterton, also in the BACP criminal justice group, says of Styal women’s prison, where he was Governor: ‘I have never seen such a concentration of damaged, fragile people. The levels of mental ill health and self-harm are staggering.’ He describes a coaching initiative at Styal: ‘That hour to reflect and just talk one-to-one about events that led them to where they were, it was a rare opportunity for these women to take stock and think how they might do things differently in the future.’

Elsewhere in this issue we hear from three women about their training in sex therapy: ‘My ideas of myself as liberated and well informed soon dissolved into the realisation that I was actually very married and... really quite “vanilla”,’ says one. And established sex therapist Paula Hall reveals that what she finds most challenging about working with sex addiction is other people’s blinkered attitudes: the refusal, even among counselling colleagues, to understand the condition as an addiction, not simply a lack of moral restraint.