Fat stigma in therapy (free article)
Naomi Moller asks how fat stigma may affect the therapeutic process and what the profession should do about it.

Problem gamblers and their mothers
Gambling addicts’ families can sometimes need help themselves to escape a dependency on the addiction, writes Anne Glynn.

Working with our clients’ worlds
Jonathan Hales emphasises the need to work with clients’ here and now as well as their past.

News focus: Parity – empty promise or panacea?
What would the health service look like if psychological therapies were fully funded to meet need? A new BACP report makes a powerful case for parity. Catherine Jackson reports

In practice
Jeanine Connor: So this is Christmas

In the client's chair
Rose Rouse: Exploring echoes of the past

The researcher
Barry McInnes: And so, again, to IAPT

How I became a therapist
Alistair Appleton 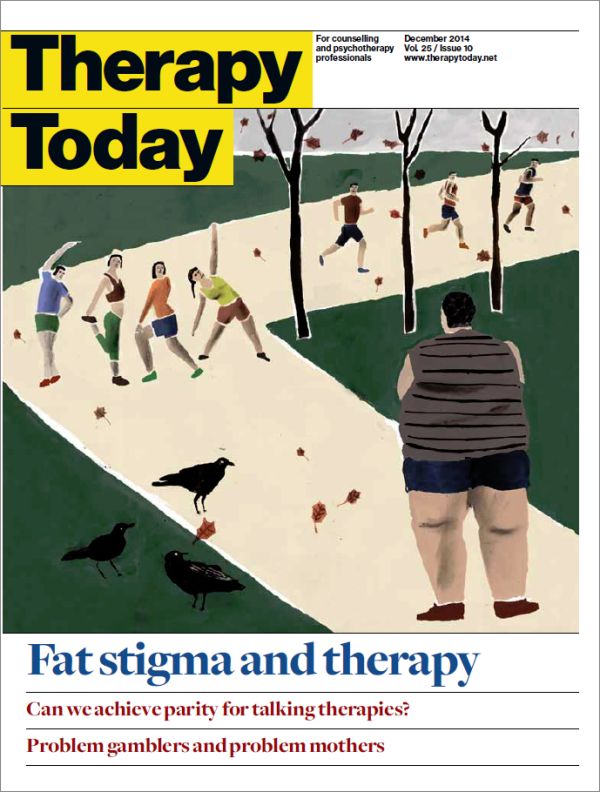 A few weeks ago I noticed a Twitter campaign aimed at Gemma Collins, a TV personality who had apparently quit I’m a Celebrity… after only three days. I was shocked by the cruelty of the social media abuse, which centred on fat jokes and how she couldn’t get enough to eat in the jungle. It’s hard to imagine anyone in this day and age discriminating so explicitly on the basis of race, gender or sexuality, although social media trolls seem to know no bounds.

Not being familiar with the background to the programme, I asked my teenage son, who confirmed that it was a bit harsh but probably had more to do with her lack of popularity than her size. When I went on to ask him about fat prejudice however, he said straight away that he didn’t like fat teachers. He said that all this information about leading healthy lives makes you think, ‘Well, what are you doing?’

In this issue two therapists write about how being fat might affect the therapeutic relationship. Naomi Moller outlines the background to the so-called obesity epidemic and society’s growing fat stigma and challenges us to think about how this might affect counsellor and client. If there are more and more fat people then there must be more and more fat therapists, she argues, and for clients and the profession, surely this matters? She quotes Yalom’s case study, ‘The Fat Lady’, in which he openly describes his revulsion towards his fat client: ‘I find them disgusting,’ he writes, ‘their absurd sidewise waddle... everything I like to see in a woman, obscured in an avalanche of flesh…’ Despite a lack of research on the subject, it seems likely that fat stigma will affect a client’s view of a fat therapist, argues Moller, and may in turn affect the therapeutic alliance, which is a predictor of client outcome.

Jo Reader is concerned that, as ethical practitioners, we should free ourselves of fat prejudice and not make assumptions about a fat client’s mental and physical health. In her own experience it is fat stigma and not fat itself that is likely to have the greatest negative influence on a person’s emotional and physical wellbeing.