A slice of the cake
Catherine Jackson explores the challenges facing the third sector as NHS counselling services are put out to tender.

Wounded leaders (free article)
Nick Duffell argues that our political leadership is fatally flawed by the emotional scars of a boarding school education.

Congruence or criticism?
Nicola Davies highlights the ease with which ‘congruence’ can turn into bullying in the context of counsellor training.

Tenuous contact
Peter Pearce and Ros Sewell discuss their new concept that seeks to capture the fragility of the counselling relationship with young clients.

In practice
Jeanine Connor: Seeds of hope and potential

In the client's chair
Chris: Amazing to be myself

In the supervisor's chair
Rosie Dansey: Images of supervision

The interview
William West: What happens in the silence

How I became a therapist
Nash Popovic 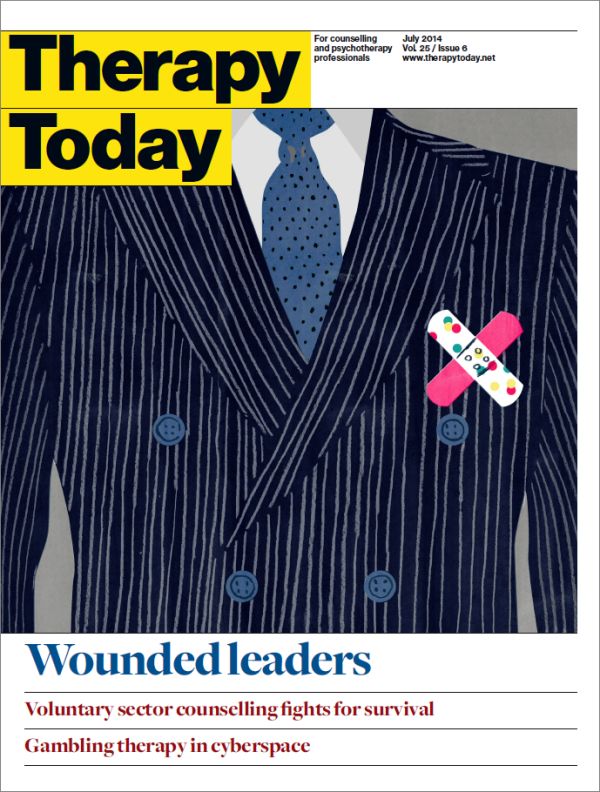 Members and subscribers can download a pdf of this issue from the Therapy Today archive.

You may have read the recent, very powerful Observer article by Alex Renton detailing his personal account of abuse and neglect in boarding school in the 1960s and 70s. He concludes his article with some words about parents today who have chosen to send their children to boarding school: ‘For convenience, or notions of status, or just because they did not love them enough, [they are] taking a mad gamble with their children’s emotional health, with their lives.’

In response, a letter calling for an end to early boarding and signed by a number of senior psychotherapists was sent to the Observer. ‘Attachment theory,’ they write, ‘plus the work of clinicians over the last two decades and now the findings of neuroscience leave no doubt about the psycho-emotional consequences of depriving children of touch, warmth and a “secure base”.’ Of course children who live at home can be equally deprived of touch, warmth and a secure base, but we do understand enough about attachment theory and emotional development to know that sending a young child away to school can risk lifelong emotional damage.

In this issue one of the signatories of the Observer letter, Nick Duffell, examines the effects of a boarding school education on our political leaders. He argues that it is our unique boarding system that maintains our class structure, resulting in a divided, top-down society rather than a true social democracy, and producing leaders with ‘unacknowledged psychodynamics’.

Nick argues that children sent away to board at a young age, like our current Prime Minister, must learn to survive rather than to relate, which he sees reflected in David Cameron’s political style, and particularly in his attitude towards Europe. And, having no truck with vulnerability from a young age, ex-boarder politicians cannot understand the vulnerable but can only create a culture for winners.