Learning to be together alone
Discovering the capacity to be alone is a fundamental aspect of growing up, writes Nick Luxmoore.

The life you change may be your own (free article)
Jeffrey Kottler describes how working to transform the lives of young girls in Nepal restored meaning to his own life.

Counselling in many tongues
Beverley Costa explores the creative potential of working multilingually in the counselling room.

Against factionalism
Michael Owens appeals to counsellors to show each other more respect.

The problem with pluralism
CBT and the person-centred approach are incompatible, argues Chris Molyneux.

In practice
Jeanine Connor: The human need for connection

In the client's chair
Rachel Kelly: The end of the rainbow

In the supervisor's chair
Rosie Dansey: Inner and outer worlds

Talking point
Andy Rogers: All need not always have prizes

How I became a therapist
Mark Dempster

From the chair
Amanda Hawkins: Care, concern and wisdom 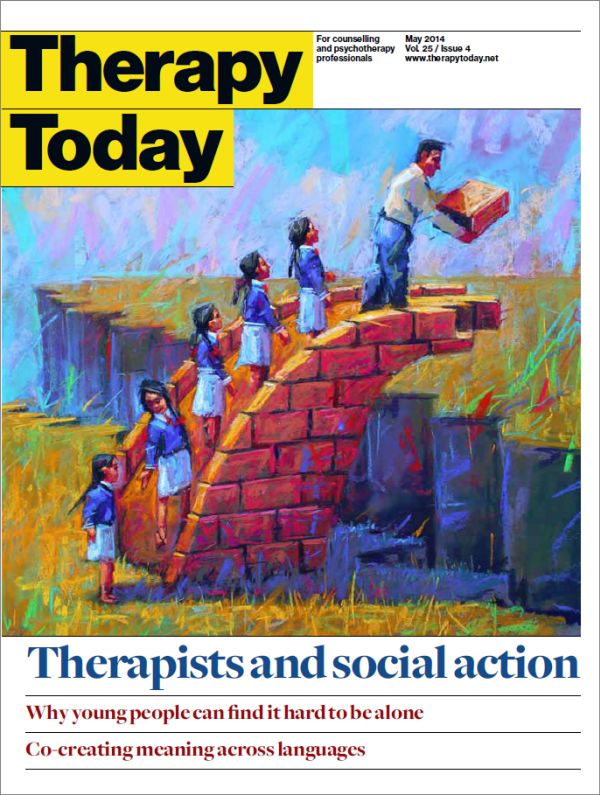 Jeffrey Kottler tells the story of how he became burnt out as a therapist. He describes how his clients – mainly affluent professionals – began to sound like they were whining. They had everything anyone could want but still it was not enough.

Around this time he went on a trip to the Himalayas and visited a remote mountain village. Helping in the village school, he began to hear rumours about girls who ‘disappeared’. He discovered that, because many families could not afford to send all their children to school, often the girls would be sold into sex slavery. He describes the moment of realising that, for 3,000 rupees ($50), he could save a 12-year-old girl from this fate. This was a life-changing moment for him and the beginning of a radically different direction in his career as a therapist.

Kottler is clear throughout his story that his journey is as much about himself as his clients or the people he is trying to help. One of his themes is that, as a therapist in private practice in the US, he felt replaceable, that many other therapists could do what he was doing as well or better. He talks about the frustration of how long it takes for therapy to work, even to make small changes, and by contrast the way he has been able to completely and immediately transform the lives of these Nepalese girls.

There is nothing like immersing yourself in a different culture to highlight what is wrong with your own. As Kottler says of the Nepalese people, ‘It is both exhilarating and disturbing to encounter people who have so little and yet appear so content, especially for those of us who have so much and always hunger for more.’ Although, of course, you don’t need to go to a remote mountain village in Nepal to find difference – just spending time with people who live in your community but whose lives are very different from your own can have a similar effect.