Counselling clients bereaved by homicide (free article)
Counsellors can be a vital support for people going through the horrors of bereavement by homicide, writes Janet Nicholls.

Why do women get postnatal depression?
Anna Kinnaird Folkman asks why postnatally depressed women’s life experiences before motherhood are so often ignored.

Therapists are human too
Marie Adams questions a reluctance among therapists to acknowledge their own needs.

How are you managing?
Alison Brown argues that good management is vital to the delivery of high quality clinical services – yet its role is barely acknowledged.

The researcher
Barry McInnes: Is therapy a worthwhile investment?

Talking point
Steve Powell: A sign of the times

Dilemmas
Can we ask clients for testimonials?

How I became a therapist
Satinder Panesar 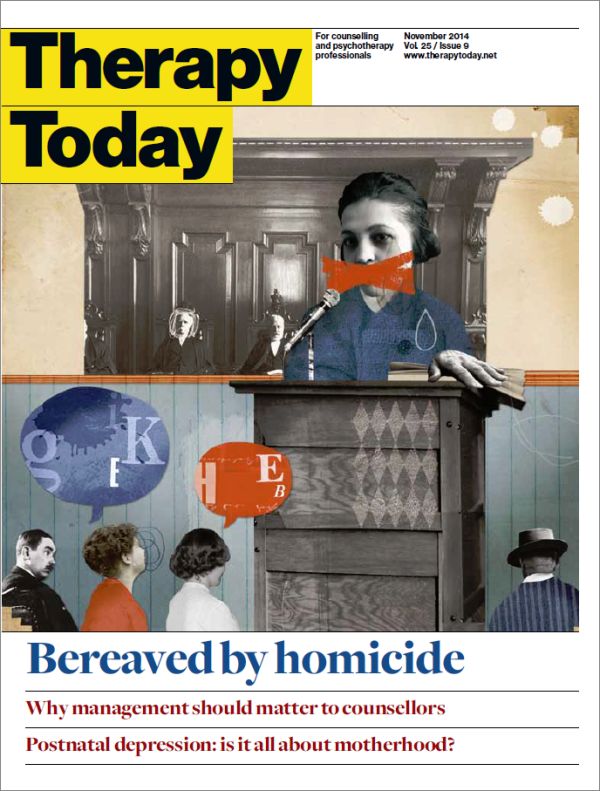 Our lead article this month gives advice to counsellors about working with clients who have been bereaved by homicide. Janet Nicholls, whose sister was robbed and murdered on the street in 2001, describes the experiences such a client may have to go through and some of the common patterns that emerge.

For example, the bereaved person may have been traumatised by hearing very distressing forensic details reported in court; they may have experienced intrusive media attention; they may no longer be able to hold onto their previous values and beliefs or see the world as a safe place. The client may have known or be related to both the victim and the accused, or even be a suspect themselves, in which case the term ‘complicated grief’ doesn’t begin to cover what they will go through.

One thing that struck me when reading Janet’s article is that there is no publicly-funded counselling available for people bereaved by homicide and those who seek counselling may not be able to afford the help or may even resent having to pay for it themselves. She praises the police family liaison officers who provide support for close family until the investigations and trial are over but this is in no way the same as counselling. As in so many situations in our society, people turn to counsellors for support when there is nowhere else to go, as they might have turned to priests in the past.

We continue to receive your letters about the lack of paid work available for counsellors and the difficulties making a viable living from counselling alone. In his research column this month Barry McInnes applauds the Government’s commitment to achieving parity of esteem between mental and physical health and BACP’s lead in addressing this inequality as it relates to psychological therapies. In time, he suggests, this may help create a better employment landscape for counsellors and psychotherapists but in the meantime much more needs to be done.