Gender-based violence and displacement
Ilaria Michelis and Melanie Megevand report on efforts to support women and girls who have fled the Syrian conflict.

From individual to collective healing
Orso Muneghina explains how Sudan is building its own capacity to provide mental health care to its traumatised people.

After the earthquake
Florence Saint-Jean, Mehmet Akkurt and Carlos Golfetto are working with Haitian healthcare professionals to promote understanding of the effects of trauma.

In the client's chair
Alexander: The power of music

The researcher
Sarah Meyer: Support for the displaced

How I became a therapist
Angelica Tello

The interview
Jeffrey Kottler: Life is not for sitting still

From the chair
Amanda Hawkins: The end is in sight 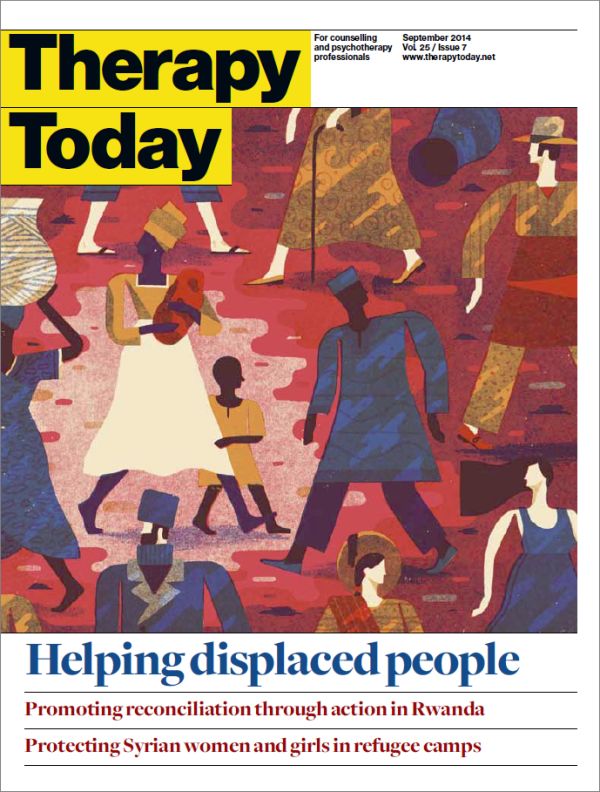 A UN report in June showed that at the end of 2013 the number of refugees, asylum seekers and internally displaced people had risen to over 50 million for the first time since the Second World War. This figure will have risen dramatically in recent months, with continued violence in the Middle East and Ukraine.

In the face of such overwhelming human tragedy it can be difficult to know how to respond. I recently heard the Reverend Dr Jane Leach on the radio saying that despair is one reaction to terrible news, resignation is another but a third possibility is to hear bad news as a call to responsibility and to action. For this issue of Therapy Today our international editor Jacqui Gray has gathered stories from around the world of practitioners who are offering different forms of therapeutic
help to those who have survived war but lost almost everything. Some therapists work holistically with the long-term effects of displacement, loss of homeland and culture, while others try to help with the immediate impact of trauma.

Ilaria Michelis and Melanie Megevand report on the plight of Syrian women and girls who may have escaped death but who now face gender-based violence in refugee camps. Having to negotiate hostile dynamics in their new situations means that girls like 14-year-old Mariam who fled Syria with her family for Lebanon become severely depressed and withdrawn, seeing no hope for the future.

Twenty years after the Rwandan genocide Masahiro Minami is using Japanese Morita therapy in remote villages in Rwanda to promote peace and reconciliation between survivor and perpetrator through engaging them together in purposeful action. The perpetrator – who has murdered loved ones of the survivor – says to the survivor: ‘I am prepared to offer my labour for the remainder of my life. Would you please receive it?’ Survivors tell Masahiro that they experience a ‘joy springing from their heart’ when they see how hard the perpetrators are working for them. Actions not words, they say, are what matter in this extraordinary work.