The limits of neuroscience
The neuroscientific lens shows only part of the picture, warns Kenneth J Gergen.

Community conversations
Colin Berry says that there is a role for counsellors in promoting social health.

Self-care in hospice work
Val Humphreys emphasises the importance of self-care when working with death.

Race and supervision
Charles Brown shows how racial difference can be brought into group supervision.

Setting up a co-operative
Justine Gore-Smith describes how she and colleagues set up a counselling co-operative.

Your views
Jeanine Connor: The significance of first dates
Lynne Friedli and Robert Stearn: No work, can't work
IAPT counselling team: In defence of the NHS

How I became a therapist
Roger Helyar

Dilemmas
Confidentiality after a client dies

From the chair
Andrew Reeves: Social change or social control - the safeguarding route leads to both 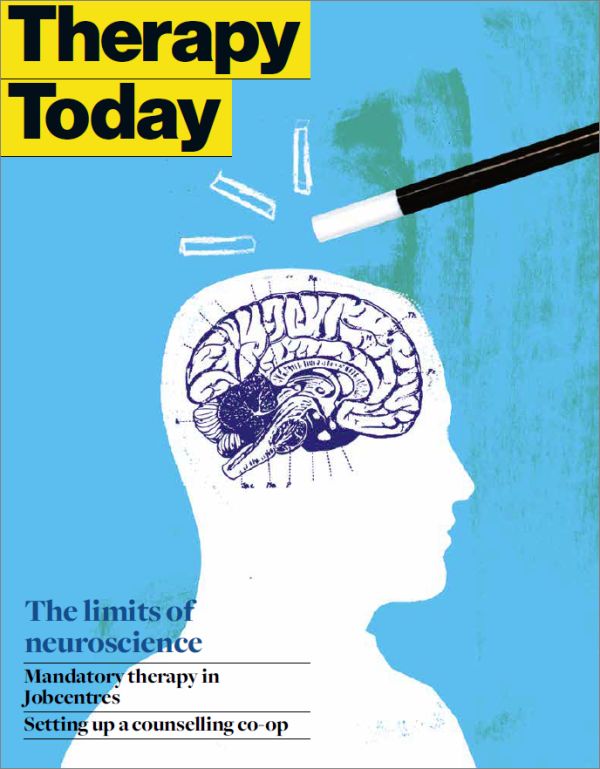 To what extent is neuroscience really a friend of psychological therapy? Kenneth Gergen argues in our cover feature this month that we should be very concerned about the way in which neuroscience is increasingly being used to support the biomedical model. Where the neural basis of ‘psychological disorders’ can be pinpointed by research and brain imaging, this provides strong support for ‘the diagnostic categorisation of mental illness, the development of pharmacological treatments for such illnesses and the efficient dispensing of treatment to the afflicted’. But this presupposes that what is happening in the brain is the cause of the symptoms of the mental disorder.

In the case of depression, for example, a scan might reveal dopamine and serotonin metabolism in the brain, but it doesn’t take into account that brains are essentially plastic and that they are in bodies and bodies have a history and inhabit a particular social-economic and cultural context. Do the chemical processes in the brain give rise to the depressive symptoms or does individual experience lead to changes in the brain’s neural pathways?

Another worrying development that you may have read about in the media is the possibility of compulsory therapy in Jobcentres. Lynne Friedli and Robert Stearn, members of boycottworkfare.org, write about this in Your Views, highlighting the way in which being unemployed is fast becoming a diagnosis requiring treatment with psychological therapy. BACP Chair Andrew Reeves made a statement earlier this month: ‘Benefit claimants shouldn’t be expected to have therapy under the threat of their benefits being stopped – it is unethical and potentially harmful.’ We explore this issue in depth in this month’s news feature. All the main professional bodies question how practitioners could ethically take part in something so coercive and the recently-formed group Psychologists Against Austerity urges psychologists to think very carefully about how their work is being used and to what ends: ‘The workfare approach positions unemployment as a problem of the individual when it’s actually a structural problem. It’s pernicious.’

Sadly I have to announce that Catherine Jackson will be leaving us at the end of this month. I’d like to thank her for her enormous contribution to Therapy Today over the last three and a half years.