What’s in a label?
Carol Swanson explores the influence of a mental health diagnosis on the therapeutic relationship.

Circle Diagram: a visual aid to therapy
David Waite presents his use of diagrams in therapy.

Living with a deafened partner
Dick Hill talks to the partners of people with acquired hearing loss.

Counselling across cultures
Mané Kumria describes how counselling can change the lives of Indian women.

News focus: When therapy does harm
A major study at Shefﬁeld University is challenging counsellors and therapists to accept that what they do can both help and harm. Catherine Jackson reports

How I became a therapist
Penny Leake

Dilemmas
To hug or not to hug? 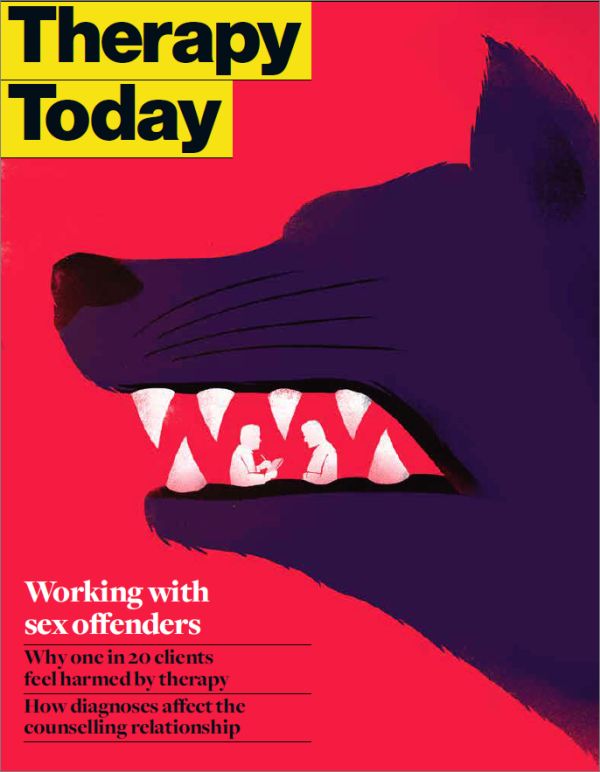 Continuing last month’s theme of counsellors going into places the rest of society would rather forget about, in this issue Andrew Smith describes his work with sex offenders. I don’t recall having published any articles on this subject in the last 15 years, which would suggest that not many of our members practise in this area.

I do remember interviewing the late Ray Wyre, in the early 1990s, about his pioneering work with sex offenders and about the obstacles he came up against because of perceptions of sex offenders within the criminal justice system. He once said, ‘Even in the people who are hated by society, there is a good person lurking in there somewhere.’

As a member of society, Andrew Smith says he cannot avoid being affected by the demonised identity of sex offenders in the public mind. As a therapist working with sex offenders, he says that, in order to form an unconditionally non-judgmental alliance with the client, he has to bracket a range of negative feelings. Andrew also makes a convincing case for the need for more preventive counselling support in the community for this group – after all this is a growing problem: 50,000 people in the UK are viewing indecent images of children online and this figure is likely to increase. With the right help at the right time, Andrew believes many low-risk offenders may be able to reduce, manage or completely stop harmful sexual behaviour.

Another subject that we don’t hear much about in the therapy press is the potential for therapy to harm clients. This is the focus of the AdEPT study at Sheffield University, led by Professor Glenys Parry. One in 20 clients of psychological therapies say they experienced ‘lasting bad effects’ from their treatment. AdEPT’s findings tell us that the harm is rarely due to actual malpractice; issues around power came out time and time again in qualitative research with clients: the client’s sense of lack of voice, lack of power, feeling belittled and judged. These issues are also raised by Premila Trivedi, writing from a client’s perspective in the Your Views columns this month. Many of the professional systems and practices seemed to her to be ‘rigidly prescribed, with in-built power relations that are more about upholding the credibility and status of the particular therapeutic model rather than empowering and addressing the needs of the individual client’.