In pursuit of authenticity (free article)
Julia Buckroyd celebrates a journey of learning how to ‘be myself and behave myself’.

Counsellor to the rescue
Nicola Davies warns counsellors to beware of the unacknowledged urge to rescue clients.

Why make research so hard to do?
Stacey Goldman has had to negotiate many hurdles to conduct her research study.

Your views
Jeanine Connor: It's time to speak up for the sake of our clients
Sue Richardson: No healing without justice
Mike Trier and Elaine Davies: We need to talk about CBT

News focus: What are they looking for?
There are no simple answers when working with young people at risk of radicalisation

How I became a therapist
Myira Khan 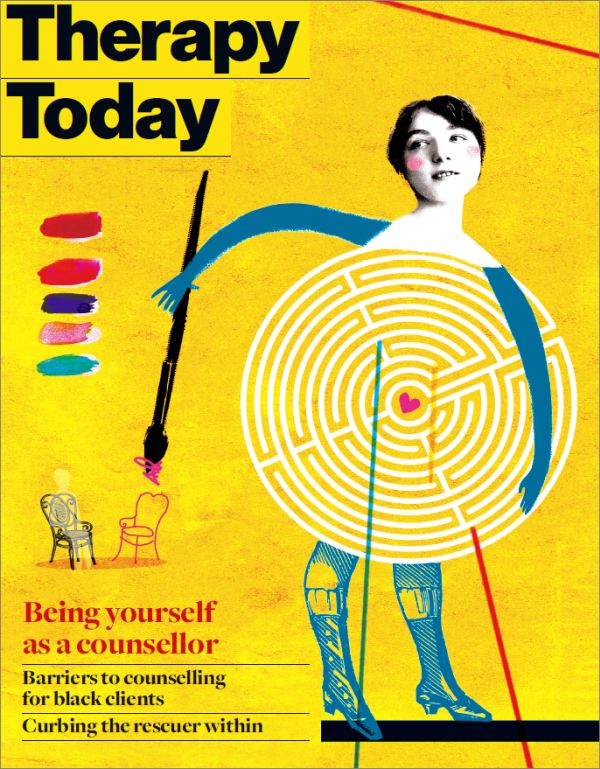 Editorial: How we became therapists

With another BACP Student Conference at the end of this month, we hear from Julia Buckroyd, one of the presenters, who sets the theme for this issue about developing as a practitioner. I find it hugely refreshing when I hear practitioners like Julia talk because she brings so much of herself into what she says about her work. Here she looks back at how she has evolved as a practitioner since her early days of psychoanalytic training when she ‘believed the party line about “abstinence” and “the blank screen”’. Thirty years on she has started to explore for herself what Winnicott’s ‘being myself and behaving myself’ means for her as a therapist in terms of being authentic and human.

There has been some debate recently in Therapy Today about whether just completing a training can properly equip you for private practice, where you will be working in isolation, without the support of an organisation. Julia writes that she was several years into her career before she realised that her training was just a beginning and that she needed to take responsibility for her own ongoing development. I wonder whether, as we move further towards professionalisation and automatic registration, we’re more likely to lose sight of this?

Carleen Robinson talks about her counselling training as a black African Caribbean woman and how good it felt to be able to explore for the first time what it means to be different in our society. But her experience of training also echoes that debated by Eugene Ellis and Niki Cooper in the December 2013 issue of Therapy Today. Some of her white peers would fall silent when the subject came up of what it felt like to be someone from an ethnic minority on the course. Perhaps it was too awkward to go there, Carleen suggests; perhaps they were afraid of causing offence. Looking back, she asks how, if this is not addressed during training, ‘can therapists relate to clients experiencing these issues and, most of all, challenge their own prejudices?’

In ‘How I became a therapist’, Myira Khan from Leicester describes how, during her five years of training she was the only Asian woman and the only Muslim on her courses. She has since set up the Muslim Counsellor & Psychotherapist Network to offer peer support and networking to Muslim students and practitioners. Myira has been named as a ‘Mental Health Hero’ by Nick Clegg for her work.