The NHS in 2015
Gillian Proctor reflects on how the NHS has changed since 2002.

Retirement – a tale of attachment and loss
Anne Power outlines the dilemmas for therapists considering retirement.

When supervision goes wrong
Els van Ooijen considers what can go wrong if supervisors are not adequately prepared for the role.

How I became a therapist
Susan Utting-Simon

From the chair
Andrew Reeves: When it comes to mental health the obvious is missed time and time again 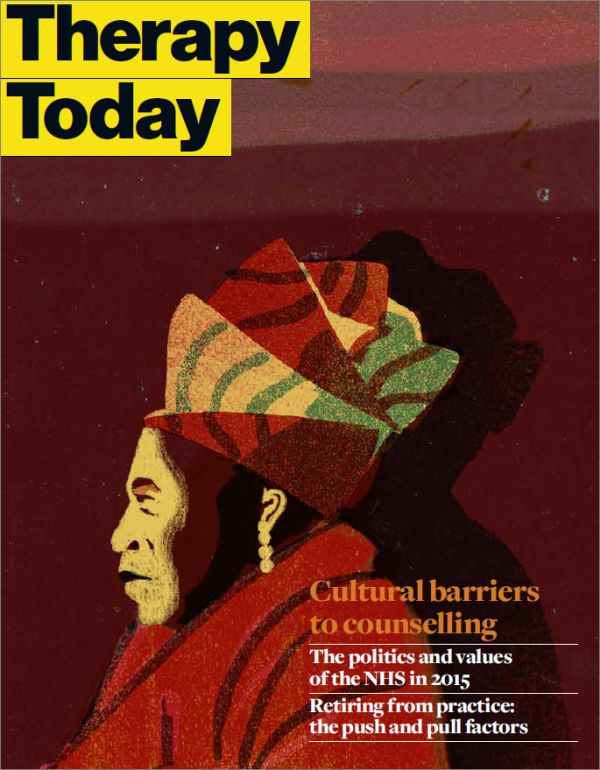 The issue of hard-to-reach groups is an ongoing challenge for mental health services. Research shows that black, Asian, minority ethnic and older people are among the groups least likely to access counselling services. Helen George carried out research looking at what prevents older African Caribbean women from seeking help with mental health problems. Her findings make interesting reading. Culturally, opening up and talking about personal problems is not the norm amongst African Caribbean women. Their coping mechanisms are more likely to be their faith and drawing strength from being part of their community.

One thing that particularly struck me was that participants felt the tough lives they had led – coming over to the UK, bringing children from the West Indies, finding work, often doing several menial jobs, enduring racism – had created resilience: ‘That was a real test in life…’ said one interviewee. ‘Now they gonna look in your face and tell you that they don’t want no counselling because they have gone through all that without any help.’ Another interviewee cited racism as a reason for not being offered support. Helen works for an IAPT service, which she says has made great efforts to reach out to this group, but this sort of awareness building, she argues, needs to happen throughout the profession.

In 2002 Gillian Proctor wrote an article for the BACP Healthcare journal in which she imagined the history of the NHS from 1985 to 2015. In this issue she considers the extent to which her predictions – for what is essentially the ongoing privatisation of the NHS – have come true and forecasts further developments for the future. In 2002 Gillian described the ‘efficiency’ and ‘accountability’ discourses which have led to the reduction of resources – so that cheapest is usually best – and the ‘industry of regulating bodies’ that we recognise in the NHS today. The effect of all this on mental healthcare has of course been profound. Her hope is that, despite now having to operate in a ‘value-free technological-based healthcare’, the values of counsellors and psychotherapists will continue to have an impact on individual clients.