The migrant crisis: helping Syrian refugees
How prepared are our mental health services to deal with the crisis, asks Catherine Jackson?

We cannot talk if we do not feel free
Jude Boyles and interpreters Nathalie Talbot and Bina Pahlevan work with torture survivors seeking asylum.

Adult bullying – are we taking it seriously?
Patrick Quinn examines the many facets of adult bullying.

Living with your child’s violence
Dave Collins describes how he and his wife remain traumatised by their adopted child’s violent behaviour.

Your views
Pete Sanders: What is the point of therapy?
Mary O'Sullivan: The more you make of it...

How I became a therapist
Yonca Ozkaya

Dilemmas
Should you disclose your sexuality in therapy?

From the chair
Andrew Reeves: BACP is building relationships with other professional bodies 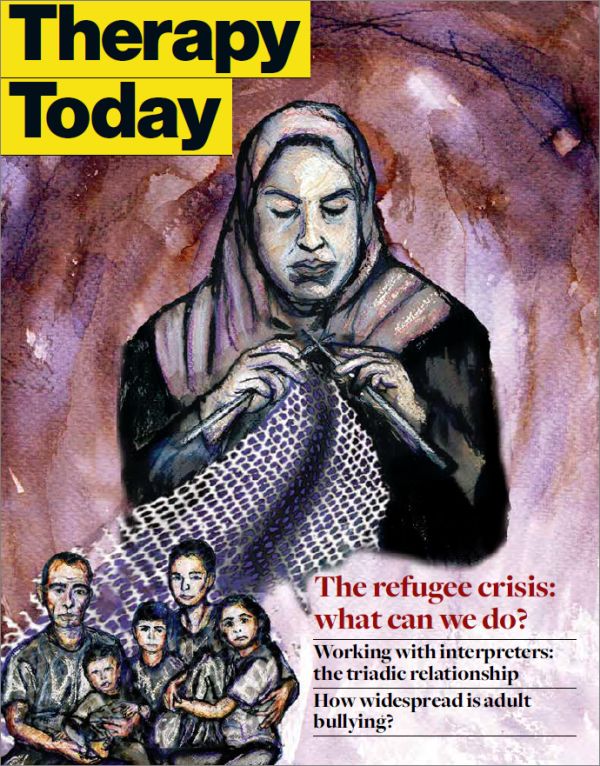 A pdf of this issue is available from the Therapy Today archive.

Just as we go to press I’ve received an email from a reader asking us to include less coverage of political, social and international issues and more coverage of what practitioners find useful in their practice. Too late, I’m afraid, because given what is happening in the world we felt it appropriate this month to focus on the migrant crisis. We also received letters from members wanting to know how they, as counsellors and psychotherapists, could help and what we could do as a community. So we put those questions to some of the many voluntary services and organisations in the UK who are experienced in working with these clients.

One of the perhaps predictable answers, from a UN briefing for support staff working with Syrian refugees in refugee camps and in host countries, is that the primary cause of distress for most refugees is likely to be their everyday living conditions, rather than any form of mental illness. This is just as true for refugees living in the UK, who may struggle to attend sessions because they have more essential appointments to do with housing or getting their asylum status. As Sanja Djeric-Kane of Refugee Action Kingston says, the real problem in helping refugees is the lack of any coherent national strategy to deliver the structured support people need if they are to integrate successfully into this society.

The majority of the experience and knowledge in working with refugees sits in the voluntary sector and in many cases, because of recent cuts in funding, much of this work is done by volunteers. Part of the therapeutic work for people who have lost so much is about building new attachments and resilience. Some voluntary sector services are also playing a vital role in providing training and consultancy for NHS and IAPT services, which is hugely valuable. Jude Boyles of Freedom from Torture recommends that people offer more general support by contacting the Red Cross. ‘If you want to volunteer as therapists,’ she says, ‘make sure you get training first.’

Jude also writes about working with interpreters and asylum seekers in a triadic relationship. I had assumed that having an interpreter in the room would be at best a necessary inconvenience; in fact, as the writers describe, the client may initially form a stronger bond with the interpreter who shares their language and also experiences the interpreter as a safe and reassuring presence in an alien situation.