An overview of therapy in China
Gareth Davey and Xiang Zhao report on developments in counselling.

Maple Women’s Hotline of China
A phone helpline has thrown a lifeline to thousands of Chinese women, says Xingjuan Wang.

Finding my way
Jianping Wang reflects on her professional path as a counselling psychologist.

Your views
Naomi Taylor: Home is where I am living
Graham Allen: A trip to Beijing Union University

How I became a therapist
Stephen Edwards

From the chair
Andrew Reeves: 'What is the point of BACP membership?' one member asks 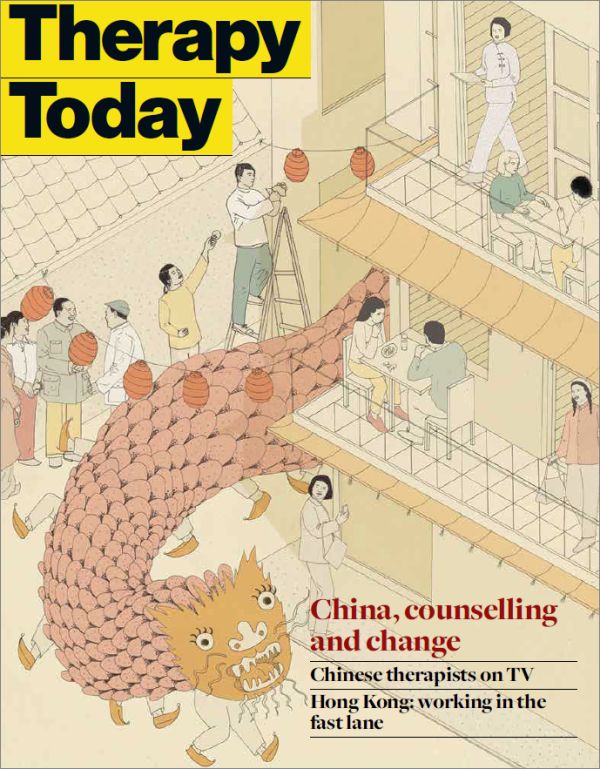 Much change has taken place in China in recent years. As Graham Allen discovered during his trip to Beijing Union University, however, Chinese people are beginning to ask questions about the impact of radical economic growth and increased consumerism on their culture and on their lives.

Therapy in China has not been exempt from the change going on around it. Although many people still lack an understanding of counselling, public awareness of and demand for it is rising; the main problem is the severe shortage of trained counsellors, writes Jianping Wang. Culture plays a part too. The Chinese population has grown up with Confucianism, which emphasises hierarchical relationships and obedience to authority. And, As Gareth Davey and Xian Zhao point out, China’s culture is collectivist, whereas counselling models in the UK generally emphasise autonomy, individualism and self-actualisation. As a result, Chinese people tend to view therapists as experts and authority figures, and expect them to be directive.

Several authors in this issue describe the huge cultural pressure put on young Chinese people from their families to achieve academically. The country has also identified internet addiction as a health threat to its young people. Watching the recent BBC 3 programme, Secrets of China – Fit in or Fail, I found it disturbing to hear one of the young Chinese men, at ‘boot camp’ because of his online video game addiction, explaining how sometimes he would game for three days, eating nothing, just drinking water. He said that he gamed to relax because he felt he wasn’t doing as well as his peers in his studies.

The articles in this issue reveal a huge variation in lifestyles, incomes and perspectives across China, particularly between rural and urban areas, now further distorted by the economic changes the country is going through. Therapy is still evolving in China and access to it is not equal for all. However, positive and inspiring therapeutic responses to need can be found, such as the Maple Women’s Hotline, a free counselling telephone helpline, staffed by volunteers, many of whom were former callers. Finally, chronicling the fascinating symbiotic relationship between therapy and the media in China, Hsuan-Ying Huang describes how therapy is particularly meeting a need among the country’s growing urban middle class, who have learned about it from watching the proliferation of televised therapy programmes over the last decade.