Counselling a community in crisis
Susan Dale describes setting up a counselling service in Machynlleth, after the murder of April Jones.

Mourning involuntary childlessness
Amanda Sives reminds us of the grief of mothers whose child has died before birth.

News feature: The true cost of managed care (free article)
Catherine Jackson reports from a recent conference on the future of psychological therapy

How I became a therapist
Chris Williams

From a Governor
Eddie Carden 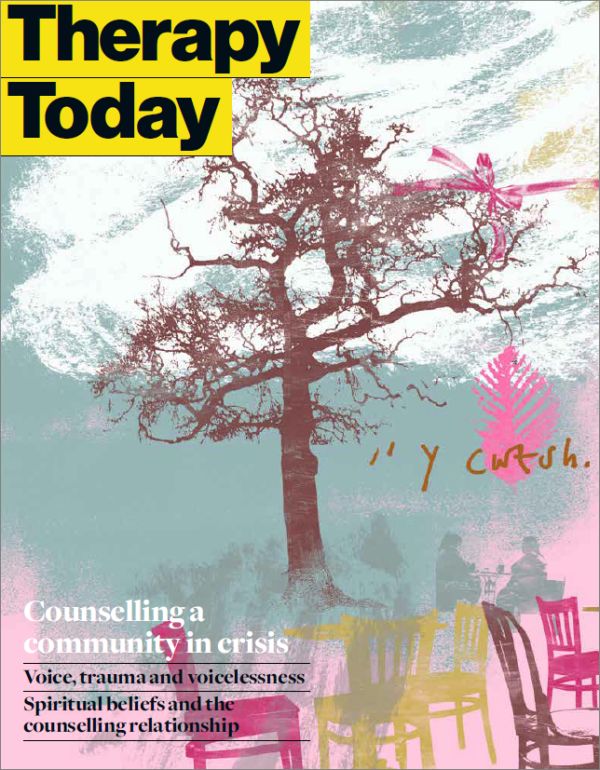 Editorial: The value of counselling

As always, there’s a lot going on in this issue, but one clear strand is about the future. The interview with Andrew Reeves, BACP Chair, and Hadyn Williams, BACP Chief Executive, introducing BACP’s new strategy, will inspire members with its thunderous statement of pride in the counselling professions and BACP’s commitment to champion the value of what its members offer individuals, communities, and society. Counselling professionals are exactly that – professionals, with a clear professional identity, clear standards of training, clear ethical principles and a robust regulatory process that clients can trust. On that foundation, BACP is in a good position to challenge the continual peck-peck-peck of a concerted agenda to belittle – literally cheapen – that value.

Counselling is not just ‘tea and sympathy’ (although it can offer both). It is also very diverse, and Andrew and Hadyn are explicit about BACP’s embrace of the many different counselling professions, as well as those in allied professions who use counselling skills.

Counselling’s value and values are amply exemplified in Susan Dale’s article about the community counselling service she helped set up in Machynlleth, Wales, following the murder of April Jones. Maria, one of the project’s co-volunteers, captures in one word the role of the Listening Point centre they established in the heart of the estate where April and her family lived. It is ‘cwtsh’ – a Welsh word for a cuddle, an embrace, an acceptance of anyone and everyone (except the media) who came through the door, and a safe space to keep precious things. Provided by people from the local community for the local community, to meet an immediate need, it didn’t seek to prolong its existence for its own sake when it became clear that the community had recovered its ability to look after itself and its own. Beautiful.

Going back to the future, the challenges are many – as the recent ‘Future of Psychological Therapy’ conference discussed. Will tomorrow’s psychological wellbeing practitioner be a pre-programmed robot delivering computerised ‘workability’ therapy to the unemployed? Not if BACP can help it.