News feature: Not so, NICE! (free article)
NICE may again be questioning the effectiveness of counselling. Catherine Jackson reports

Cover story: I don’t know who I am
Frances Bernstein explains why attachment is so important in work with young people leaving care

What are you really hungry for?
Lesley Butlin and Liz Blatherwick have devised a therapeutic group approach to tackling obesity

Cogs, strings and other things
Séan Hindle describes the unique perspective his brain injury brings to his counselling practice

Dilemmas
Gloria’s son is dating one of her former clients

Talking point
Breaking the news about your summer break

Self-care
Switching off with dog-agility competitions 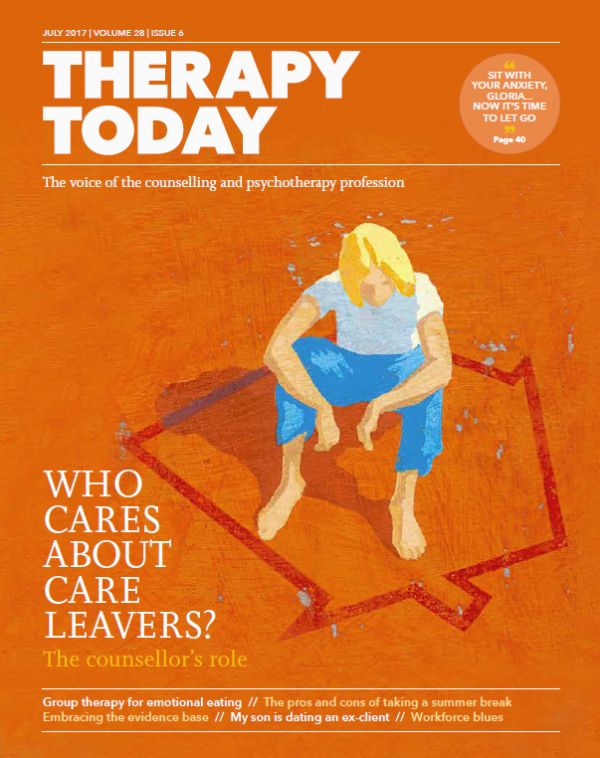 As reported in our News Feature this month, around the time you read this, NICE will be publishing its revised guideline on treatments for depression in adults. There is a possibility that the revised guideline will not recommend counselling. NICE was reluctant to include it in its 2009 guideline, and surrounded it with caveats when it finally gave way to concerted BACP pressure. We may need a similar campaign this summer, and your support will be vital, if it comes to this.

The research evidence on which NICE guidelines are based must conform to strict criteria. But there is, of course, a problem with evidence, as Naomi Moller in the News Feature and Sarah Gingell’s article in this issue both explore. Statistical data can be interpreted in many ways, and are by no means untouched by bias. That doesn’t mean we should ignore data; it simply means they cannot be accepted at face value. Be critical, but don’t let your scepticism, or indeed your allegiance to your own particular sacred cow, stop you asking ‘How?’ and ‘Why?’

This is the last issue before we take our summer break. There is no August issue. We’ve come a long way since our relaunch in February. We’ve heard your feedback about readability, and I hope we have improved on that score. We’ve also heard your cries of protest about the loss of book reviews – they’re back! Therapy Today is a living project – we have many more ideas for the future. Enjoy your summers, all.

When we asked Andrew Reeves, our BACP Chair, what he would like to see in Therapy Today he answered, ‘Just one thing – a regular slot on self-care.’

It has since become a regular feature in the magazine, with a page every issue devoted to members sharing what they do to rebalance the emotional toll that their work takes on them. In this issue, for example, Kim Patel shares her passion for dog agility competitions and how the physicality and focus required helps her leave her counselling cares behind. It’s a theme that chimes with me, as I find a twice-daily dog walk alongside the majestic River Thames sets me up and gently sets me down again each day.

My first-ever supervisor advised me that I wouldn’t be much use to my clients if I didn’t look after myself. My favourite quick tip from her armoury was to visualise a refreshing shower cascading over you as you show clients out through the therapy room door. Traditionally, many therapists took the whole of August off. If you can’t, or don’t, do that, then remember to take some quality time out for yourself this summer.