News feature: How we live now (free article)
Sally Brown highlights some of the main ways in which the digital revolution is influencing all our lives.

Who knew?
Jojo Gosney describes her work with couples grieving in silence for a child lost in pregnancy

Cover story: Muscle-bound man
Noah Sisson-Greene asks why so many men are driven to try to make themselves physically bigger

Why read research?
John McLeod explains why counsellors need to know how to interpret research findings

Self-care
The power of song

Dilemmas
Pamela bumps into a client on a drunken night out 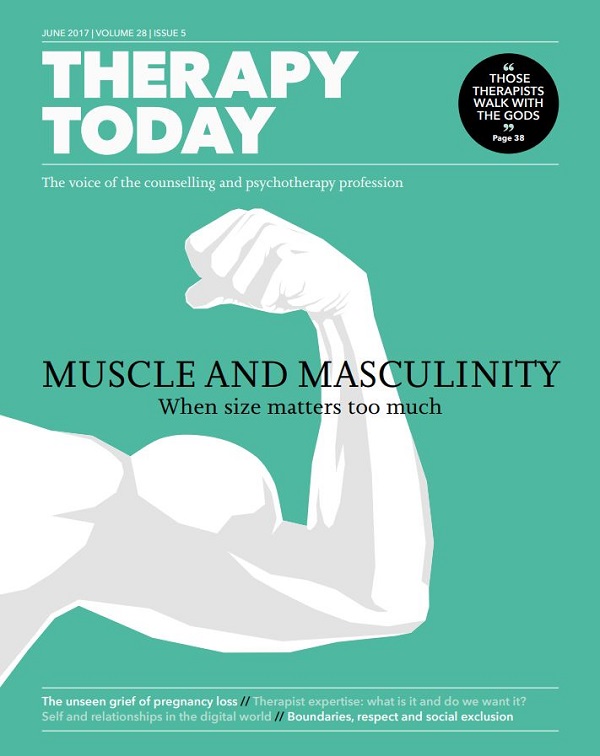 I am writing this a week after the bomb at the Manchester Arena on 22 May, having just heard that one of those killed was Martyn Hett, Figen Murray’s son. Figen featured in our May issue, with her teddy bears. I know readers will want to join me in holding Figen and her family in their thoughts.

What resonates in particular for me is that many of those who died were so young. Ariana Grande represented for them, and for young women in particular perhaps, the possibility that their dreams could come true.

Our News Feature in this issue talks about this generation of young people and their struggles to find an identity they feel is their own. Noah Sisson-Greene’s moving article offers a powerful example, with its description of vastly muscular men trying to hide what they perceive to be the eight-stone weakling inside. Men are increasingly experiencing disorders that have always been endemic among women, for whom surface attributes of appearance have long been their passport to security and success.

I am just back from the BACP Research Conference, where a special session was convened to discuss the possibility that the new NICE guidelines on treating depression may exclude counselling and recommend primarily CBT. This happened with the 2009 guidelines, which were challenged and revised. BACP is ready to fight that battle all over again. When IAPT’s own data set shows clearly that counselling and CBT have equivalent outcomes, you have to ask if the NICE guidelines, for all their vaunted, gold-standard evidence base, relate to practice in the real world at all.

All of my clients have wanted to talk about the Manchester terror attack.

It’s as though they feel they cannot attend to themselves without first honouring the greater loss of others, accepting that their own woes are nothing compared with those of people whose lives have been blown apart.

As counsellors, we know that we will all be working with this traumatic event for a long time to come. Wherever you work, I expect you are already witnessing more anxiety and depression in the therapy room, as we sit in the ripples of sadness and despair that follow such senseless acts.

Some BACP members will be working on the front line in and around Manchester with the bereaved and with traumatised survivors and emergency workers, whose lives will never be quite the same again. Counsellors are like a follow-on emergency service – an invisible team who work in the aftermath on the emotional wounds. And what vital work it is right now.