News feature: Tap and talk (free article)
Sally Brown asks if counselling is reaping the whirlwind of the digital revolution

Waiting for the Southsea bus
Finding meaning in life is just as important as we near its end, says Helen Kewell

Talking point
How do you feel about working online? 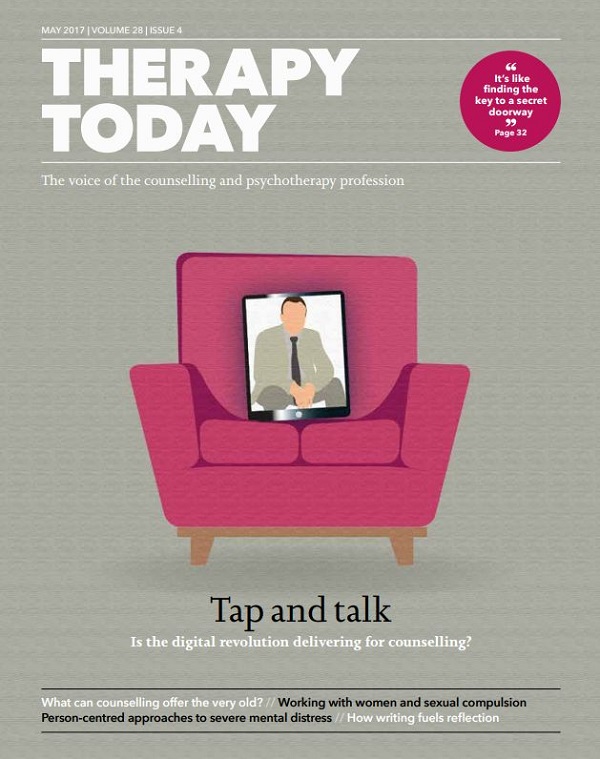 I love the way articles with no immediately apparent connection resonate with each other. Take March’s article on Redeen, the asylum seeker who could see no point in the future, and Helen Kewell’s article this month about her work with elderly people at the very end of their lives.

It is shocking that the emotional needs of older people are so frequently and thoughtlessly bypassed by the NHS, and that they are so rarely offered counselling. The assumption is that it’s too late now and, anyway, they don’t want it: ‘They would rather talk to the vicar/each other/have a nice cup of tea.’ What struck me is this article’s message that ‘it is still possible’ – that it is, indeed, crucial – to hold onto the belief that we can ‘challenge long-held life narratives and [...] dare to write new ones’, even, and perhaps especially, in very old age. The self-acceptance needed for change to occur can still be achieved at the end of life, and person-centred counselling can be the catalyst for that process.

This marries well with Stephen Joseph’s article on person-centred counselling with people in severe mental distress, for whom it is widely assumed to be useless. Not so, he argues: the Rogerian image of the potato seedlings in the cellar, growing towards the far-off light – that understanding of the damaging effects on the human psyche of thwarted and distorted potential – can explain most, if not all, forms of human distress. As Emmy van Deurzen points out in ‘This Much I Don’t Know’, you have to be willing to enter the client’s world (get on that bus to Southsea with them), ask them what stopped them going there before, and, by doing so, help them get there now.

The rapidity of the digital revolution has left therapists running to catch up. Are these wonderful new channels for communicating with clients, or a threat to our profession (and, indeed, to our own and our clients’ mental health)?

My own stance on technology is ‘love it, hate it, wouldn’t want to work without it’. Whatever we think, it’s here to stay, and the contributors to this month’s News Feature and Talking Point offer some interesting perspectives on how to use it so that it doesn’t use us.

A natural follow-on feature would be about how the so-called digital natives – our young adult clients – have been affected by growing up ‘on-screen’. How has this fast-paced, ‘always-on’ culture affected them? Has it changed how we relate and mate? Did the noughties, and the rise of Facebook, Instagram, Twitter et al, make us more narcissistic? Has the selfie generation become too self-focused? We know that anxiety and anxiety-related issues are increasing, especially in the younger generation. Has the digital revolution affected human evolution? Let’s press ‘pause for thought’..