News feature: Burnout... the high cost of caring (free article)
Burnout is an ever-present risk in the caring professions. Sally Brown talks to counsellors about their experiences, and how to avoid it.

What can I possibly achieve?
Sonia Khan describes the challenges and rewards of working with people with dementia.

On the sporting couch
Gary Bloom combines his roles of therapist and journalist in his radio show.

Talking point
What qualities do you seek in a supervisor? 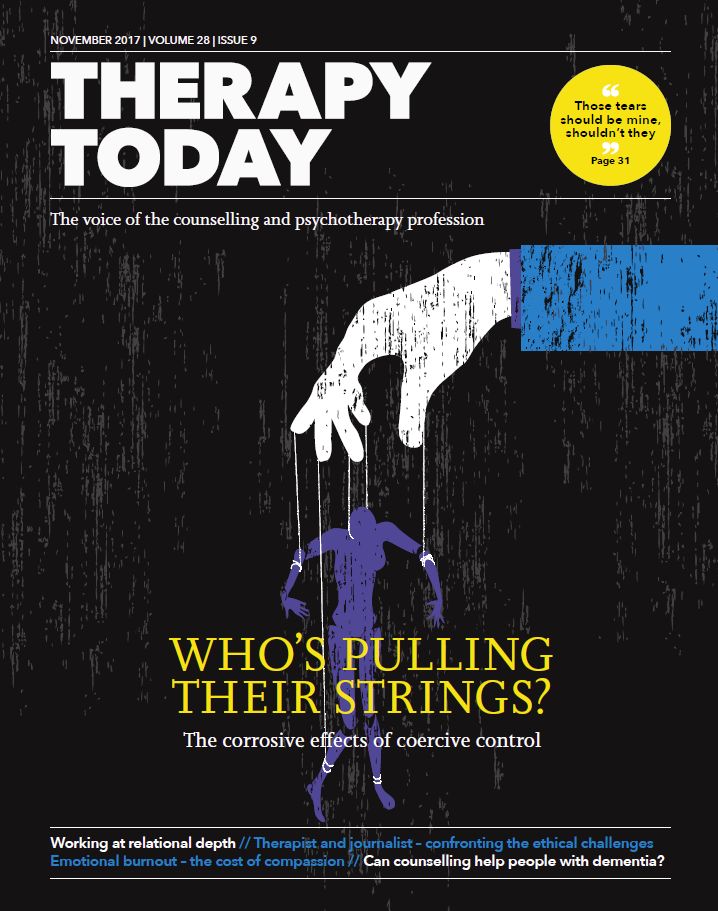 The United Nations has designated 25 November International Day for the Elimination of Violence against Women. It also marks the start of a 16-day period of activism against all gender-based violence. We are all invited to ‘orange the world’, using the colour of the UN campaign to symbolise a brighter future without violence.

This campaign influenced our decision to commission an article on coercive control for this month’s issue. Coercive control is a relatively new crime, in terms of UK law, but an age-old and still widely misunderstood, pernicious form of violence, inflicted, largely, by men on women, within intimate relationships. But it is also found in other arenas, and used by women too – in cults, for example, and in modern-day slavery, and, indeed, in parent–child relationships, work situations and others where one person exerts power over others through emotional manipulation and threat. As the authors of the article point out, such clients are very likely to come to counselling for some quite other reason, and it’s vital that counsellors are alert to the potential for this to be an underlying issue.

We have some very interesting letters this month in response to the articles in last month’s issue on the closure of the counselling courses at the University of East Anglia and prescribed drug dependency. The letters pages are your forum for engaging with issues that concern you and adding to the debates. I know a lot of discussion goes on outside the magazine, on Twitter and in Facebook groups, but do please write to us as well.

I first heard the term ‘compassion fatigue’ when used to explain a dramatic drop in charitable giving just after Live Aid.

Apparently, the public couldn’t bear to look at any more footage of the human fallout of famine, war and disease. Maybe they were self-caring?

Emotional burnout is particularly difficult for therapists because working with feelings and caring for others is why we chose this profession in the first place. As Dr Linda Dubrow-Marshall points out in our cover feature, ‘There can be shame in admitting that we are experiencing compassion fatigue, but we are human, and we are not protected from stress just because we have therapeutic skills.’

I too have felt this way. Now, if I look at my diary and have to steel myself for the week ahead, I know I need to decrease my client hours when I can, increase my self-care and take a break asap. And breathe...