Forty years of BACP (1977–2017)
Sally Aldridge charts some of the key moments in BACP’s history.

Treat us like people
Prossy Kakooza describes how counselling helped her after she fled torture in Uganda.

Boys can be victims too
Phil Mitchell knows how hard it can be for boys who have been sexually exploited to ask for help.

Talking point
What would you do if you were BACP Chair for the day?

Analyse me
Lennox Thomas wakes up with the birds. 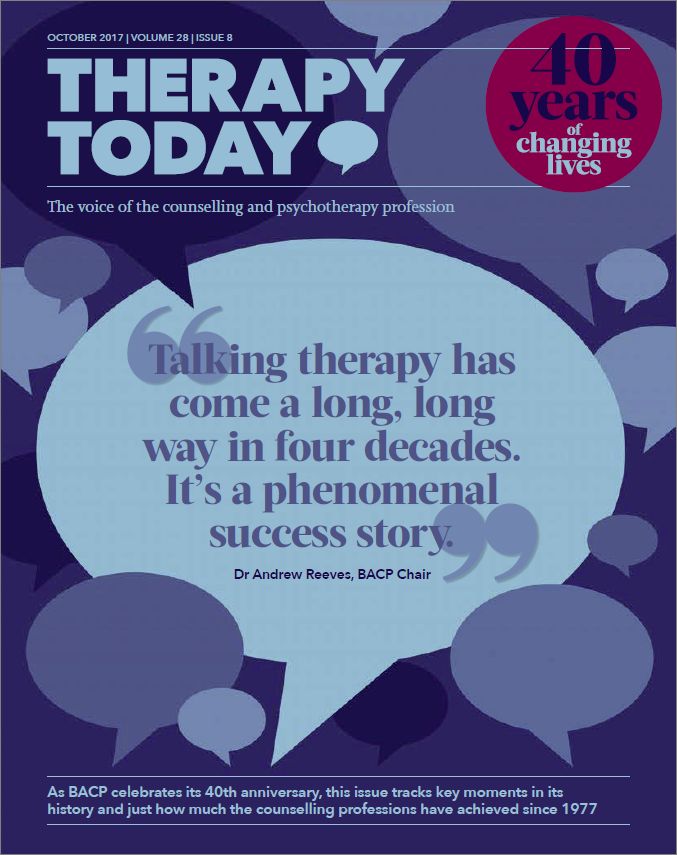 Again and again, BACP has managed to embrace both extremes, and those in between, which is why, thanks to some very astute political footwork, it has survived and thrived through the past 40 years. Another constantly recurring theme is registration. It’s startling to see how far back the UK Government first began to consider this, and how frequently it was shelved.

There is also a long history of tension between members, their elected officers and their executive officers around internal democracy and how representative BACP’s policies are of its members’ views. These dynamic tensions are inherent in any membership organisation that is genuinely for and of its members. Ultimately, the evidence of BACP’s success lies in the numbers of counsellors and psychotherapists who continue to join it, the increasing availability, appreciation and uptake of counselling by the public, and counselling’s ever-growing presence and influence within the NHS. Two principles by which BACP has consistently stood are to provide a home for all practitioners within the counselling professions, and to work both for its members and for the counselling professions as a whole. That founding spirit of inclusivity and ambition remains. Happy birthday, BACP.

In life, the big 4-0 is a significant birthday, marking middle age and the end of the beginning.

BACP’s 40th anniversary seems like a good time to review just how far we have come. Hence, the main theme of this issue is examining and celebrating the journey of our amazing profession.

Inaugurated in 1977, BAC (no P) was formed to promote the advancement of counselling. Sally Aldridge, who collated our fascinating timeline feature, notes that this followed the rapid spread of counselling during the previous decade. Growth in membership continued at an astonishing rate, from 2,200 in 1980 to some 45,000 today, with many more streaming through the courses BACP accredits around the four nations. With seven specialist divisions, nine journals and a long and strong heritage of research, we’ve come a long, long way. Happy big birthday, BACP, and here’s to many happy returns.