News feature: Nature and nurture
Catherine Jackson reports on what genetic research can tell us that may lead to better treatments for depression

‘We are here, but we are still in the war’ (free article)
Psychotherapist Jude Boyles works with Syrian refugees resettled in the UK.

What if I…?
Fiona Kennedy describes the corrosive effects of obsessive compulsive disorder.

Are you sitting comfortably?
Lucy Cavendish argues that there is much for a counsellor to learn from fiction.

Dilemmas
Can I delete a recording of a client’s call without  a written request?

From the Board
Reflections from Una Cavanagh 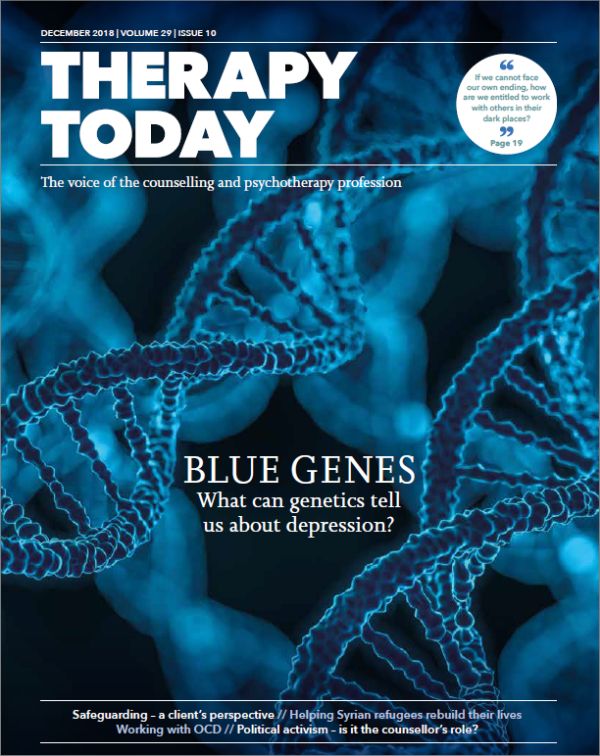 December is traditionally a time when we turn our thoughts to others less fortunate than ourselves.

This month’s feature on the Syrian refugees welcomed into the UK through the UNHCR’s global resettlement programme is a salutary reminder that this war is about to enter its eighth year, still with no resolution in sight. The title, ‘We are here but we are still in the war’, encapsulates their unimaginable situation – alive, safe, housed and fed, but with their hearts and minds with families, friends and their communities still in Syria, at daily risk of death in the ruins of their homeland. Therapists can certainly offer techniques for managing the effects of the traumas these refugees have been through, but, more importantly perhaps, they also offer a space where they can share the acute, unreachable ache of the loss of sense of self, community, meaning and home they have left behind.

Alongside, the festive holiday, with its long, dark evenings, is also traditionally a time for storytelling. In her feature, Lucy Cavendish explores what counsellors and therapists can learn from fiction. Susie Orbach believes that the author and the psychotherapist have much in common in that both are concerned with mining the depths of human experience. This is surely no less true of the traditional storytellers whose words were retold by the Grimm Brothers and whose telling vignettes of archetypal human behaviours have found their way into our annual pantomimes. Why not take yourself out to the theatre and do some off-piste mining yourselves? Have a good holiday. Therapy Today will be back in February.

Imagine a world where a quick swab of your mouth could indicate which medication you are prescribed for depression.

A world where you could even tell from a saliva test which type of talking therapy might work best for a client’s particular anxiety condition, depression or personality disorder. A brave new world indeed, and it’s not such an unlikely scenario, as this month’s news feature on genomics research reports.

Of course, the promise of any major medical breakthrough is very exciting, but advances in the identification of genes associated with specific mental health diagnoses throw up a bunch of significant ethical concerns – not least, the shadow of eugenics. Some question whether this focus on genomics in the diagnosis and treatment of mental health problems is at the expense of the therapist’s traditional holistic understanding of how life experiences, stress and systemic social factors affect our mental health.