SCoPEd – where we are now

Subjectively speaking
Wyn Bramley offers some thoughts on the value of self-supervision.

It changed my life
Kathleen Campbell tells how a school counsellor helped her overcome negative thoughts.

Talking point
Passing on the baton: How do you manage referrals?

Analyse me
Jo Boffey speaks for herself

From the Board
Andrew Kinder on employment 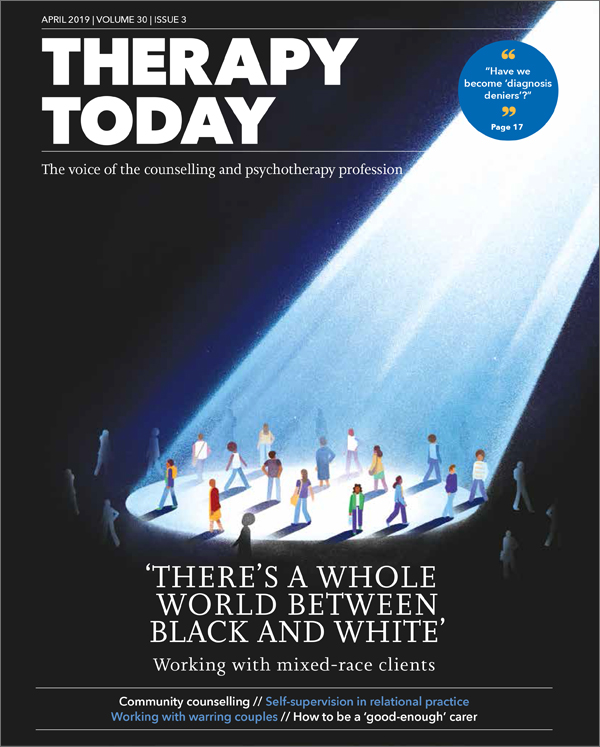 The plight of family carers seems never to be anyone’s business except their own. It is too often assumed that women (and some men, but less commonly) will just step into the role.

As an ageing, working adult with an aged parent, it was balm to my own nagging sense of guilt when I read Laura Smith’s gentle, compassionate article on counselling carers. Given the dynamics of the relationship, the concept of the good-enough mother/parent is exactly transferable to the good-enough child-carer of an elderly parent.

By coincidence, in this month’s news is some new research showing that women who work long hours and at weekends are more susceptible to depression than men. The researchers point out that women are often adding employment to existing domestic and caring responsibilities, and that women who work antisocial hours (such as weekends) are likely to be those employed in service industries – the lowest-paid jobs with least status. Small wonder they are depressed.

To me, this vividly demonstrates the need to look beyond the individual to the systemic factors influencing clients’ lives and mental health. Tanya Beetham highlights this in her short article. People who work long hours for very little pay or other reward (job satisfaction, for instance) have every reason to be anxious and depressed. Antidepressants aren’t going to fix that.

It’s this wider perspective that the social justice conference in October will be addressing. The keynote speaker, Dr Manivong Ratts, argues that counselling needs to start from the individual and move out, through family and community to the socio-environmental systems around us, in order to identify where and how to work with the client’s presenting problems. His presentation will be unmissable.

I was introduced to the notion of using an 'internal supervisor' during training.

It immediately struck me as being one of those incredibly useful and usable ideas that you can put into daily practice now and forever. My own way of working with it is to visualise one of the supervisors I’ve had in the past and imagine how they might react to a therapy conundrum I’m dealing with now. I say to myself: ‘What would Birgit or Gisela say about this? How would I explain this to Annette? Imagine Richard’s face if I revealed that.’ It has provided some interesting insights over the years

So, I was delighted when Wyn Bramley offered to write about her own take on self-supervision. Wyn believes that ‘mature therapists who work relationally need less external, “objective” supervision and more frequent self-supervision’. She notes that the ‘benefits of distance and hindsight after a session make studying it easier than if you were inside it and will prepare you for the next’. Agreed.