News feature: Slaves to the machine (free article)
Catherine Jackson gauges the impact of IAPT on its front-line counsellors

The friendly group
Anita M Hughes describes a model of groupwork she has pioneered for anxious children.

Are you ready for your death?
Maggie Fisher and Simon Cole explain why it’s essential to make a clinical will.

It changed my life
Rhiannon Jones describes how a session with a bereavement counsellor helped her learn how to cope with the death of her brother.

Talking point
Working memory: What strategies do you use to help you remember details of client sessions?

Research matters
Gathering data: Developments in how we gather data on the effectiveness of therapy offer new opportunities for counselling and psychotherapy researchers, writes John McLeod.

Dilemmas
My dying client has disclosed child pornography use

Analyse me
Bev Thomas speaks for herself

From the Board
Julie May on making tough decisions

SCoPEd
The proposed ScoPEd framework has prompted a breadth of views. Catherine Jackson talks to some of the members and stakeholders responding to the consultation. 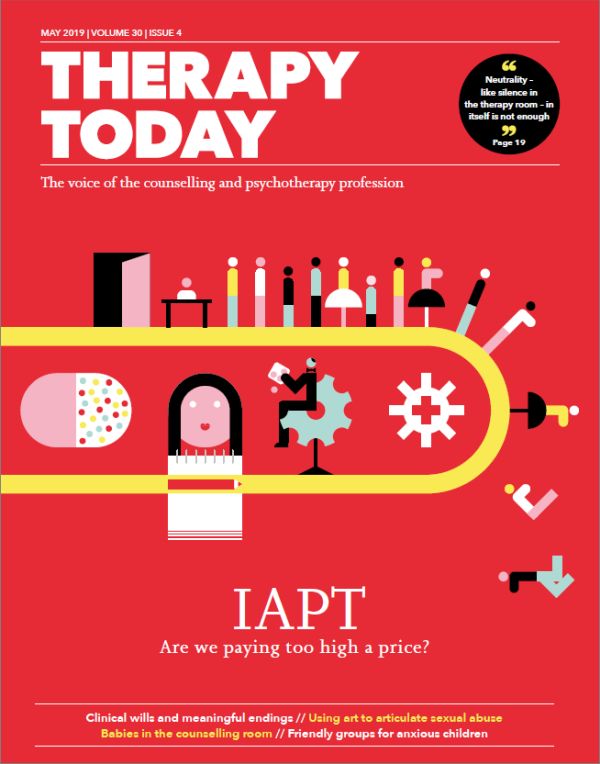 Like it or loathe it, IAPT has transformed the landscape of counselling and brought it prominently into public notice and NHS primary care. On the plus side, in many parts of England it is now possible to have 12 sessions and more of counselling, as an alternative to CBT. On the negative side, there are many parts where you can’t, and where counsellors (if there are any in the service) feel they are unable to offer enough sessions to be helpful to their clients.

This month’s news feature explores the impact on counsellors of working in such an environment, with its emphasis on throughput and targets, so alien and hostile to their professional ethos and ethics, and how they try to protect clients. ‘There’s the organisation, there’s me in the middle and then there’s the client,’ says one; ‘It’s changed me,’ says another. In the relational model, the therapist brings themselves to the encounter with the client, yet the IAPT model expects counsellors and clients to operate like machines.

Also in this issue, Maggie Fisher and Simon Cole offer a personal argument for making a clinical will, which is now supported by new BACP good practice guidance. It is, they point out, not about grandiosity but about therapeutic endings – doing what you can to make provision for your clients in case, through illness, injury or death, you are unable to achieve a planned and paced ending in person. And Debbie Collins beautifully complements their article with her own resonant account of creating a ritual to mark the death of a client who took his own life. Loss ripples both ways in a genuinely therapeutic relationship.

I have had to fend off many intruders in my therapy room over the years.

One woman asked, ‘Can I bring my puppy? He’ll sit quietly on my lap.’ A mother wanted to sit in on her 18-year-old son’s first session and argued, ‘Well, I’m paying for it!’ And a male client turned up with his ex, who declared, ‘I can tell you what’s wrong with him better than he can.’ I also once debated with my supervisor the merits of live supervision, where they observe an actual session. Leaving a mobile on ‘because I must take a call’ is the most common demand.

However, the only request I have ever acceded to was when a long-term client asked if she could bring her baby along – she had been let down by her sitter at the last minute. We have to consider how the session will be affected, as even a sleeping baby will, at the very least, change the dynamic. At worst, it could be completely disrupted by crying or feeding. Would you ever agree to another in the room? ‘And Baby Makes Three’ explores the issue.