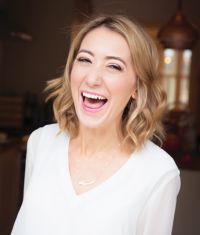 Jo Love is a mental health advocate, speaker, writer, podcaster and winner of Smallish magazine’s Parenting Ambassador of the Year for Mental Health award in 2017. After spending much of her life silently suffering with mental ill health leading to a diagnosis of postnatal depression and PTSD after the birth of her first daughter, Jo realised she needed to make a change, speak out and help others know it is OK not to be OK. She uses her platform to break the silence on mental health issues through her 25k Instagram followers and the podcast, What I Wish I had Known with Lauren, Jess & Jo. You can find Jo on Instagram @jo_love_ and @therapyismagic

In recent years, therapy has become a lifeline for me. Therapy has changed and shaped my life in ways that I could never have anticipated. At the time of writing, I have seen a therapist or been in therapy at various points for roughly half of my life. That’s 18 years of spilling my innermost thoughts to numerous strangers for bouts of various talking therapies for multiple reasons. If this were a marriage, it’d be our porcelain anniversary – a material known for both its toughness and also its fragility. Which I think is fitting, considering the context.

But that’s not to suggest it has always been plain sailing. In fact, it has been anything but. I’ve seen several therapists over the years and it’s always been a unique and complex relationship. Some therapists have been great, some less so; sometimes I’ve been open to the help and support, other times I haven’t. And I’ll admit it’s not been until relatively recently that I’ve felt the real ‘magical’ effects of therapy.

I definitely do not claim to understand how the magic of therapy works. All I know is something incredible happens when you open up to another human who you click with and who is trained to listen and support. As far as I am aware, though, no actual magic is involved in therapy, although at times I am utterly convinced that some kind of sorcery is at play in my therapist’s room. I’m frequently amazed by how much better I feel when my emotions and intellect are aligned, and how that alignment naturally occurs through the ongoing process of therapy.

I think one of the things that has made the relationship with two recent therapists so positive is that they have both consistently shown me over time that they have got my back and that my wellness is their priority. They have been on ‘Team Jo’. They have acted as compassionate and thoughtful mirrors that I can look into without judgment or fear. And that is not to say they’ve always let me off lightly. They’ve been able to gently hold me accountable, allowing me to notice and correct my course when I’m repeating behaviours that have been harmful or unproductive in the past. Having weekly sessions with one therapist for almost three years and the other for just over a year now has meant they have been able to gently excavate my whole life history and can remind me of patterns, even when I’m not seeing them myself. Sometimes it almost feels like the relationship is the healing ointment, rather than the words said.

I feel compelled not to understate how hard therapy can be. It’s hard to get the courage to go to therapy. It’s hard to find the right person who makes you feel safe, emotionally held and comfortable. It’s hard to trust the process when progress is slow. It’s hard when you doubt yourself, and it’s hard when you come away feeling worse than when you went in. It’s hard to sit in a small room with a relative stranger and tell them all your raw, uncensored stories – the ones you’ve never said aloud before, the ones you’ve never told anyone, maybe not even yourself. The imbalance of emotional exposure is hard to grapple with; they know almost all the worst bits about you, but you know next to nothing about them. Even when therapy is going great, you have a therapist you click with and you’re making great progress, it’s still bl**dy hard work. Joining the dots and noticing the patterns can be as exhausting as it is freeing. Taking the work from the cosy, safe vacuum of the therapist’s room into the harsh light of your real life can be confronting and difficult. Every second is worth it, of course, but boy, it’s still hard.

There is no magic incantation to chant, no magical potion to drink so that all my problems will be fixed. But sometimes, I can’t help but feel that what happens in therapy really is magic. How can we help clients express the inexpressible in this time of coronavirus? By Sasha Bates. Therapy Today, July 2020 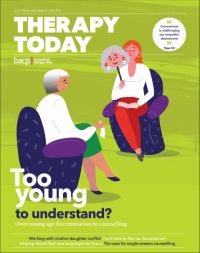