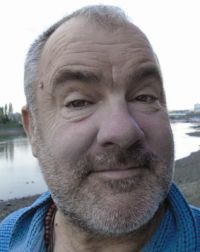 Gregory David is a well-travelled nomad, having lived in many places, including Japan, Australia, New Zealand and Kuwait. Currently based in London, he is an ex-entrepreneur, accomplished sax player and regular busker at Shepherds Bush Market, as well as an artist, charity blogger and recently published author. He is currently compiling a booklet of stories by male survivors of childhood sexual abuse and is interested to hear what therapists would find useful to hear from survivors.

Walking the Thames towpath, I caught up with a man I assessed, given that I was hypervigilant, to be bigger and stronger than me. When he glanced back, I sensed he was also hypervigilant. I intuited that he was a survivor, too.

‘If I wanted to sneak up on you, I’d wear a different jacket,’ I said, rustling as I walked. We chatted and walked together most days from then onwards until he left London. We shared that we were marijuana addicts. And we shared about our abusive childhoods.

Carl conquered his addiction largely through determination and an intensive 12-step programme – me, eventually, through therapy, albeit indirectly, as a by-product of recovery from the effects of trauma caused by childhood sexual abuse (CSA).

Addiction, I believe, is escape – escape to a ‘safer’ place; escape from being with the thoughts and feelings that are overwhelming and too hard to be with. Addiction is perceived as a safe exit. You think you choose it, but eventually it chooses you.

There is some debate about whether it is better to cut out the addiction first or cut out the cause. I didn’t specifically address my addictive behaviour in therapy, but through the sessions I became aware I used marijuana to numb feelings of intense anger or hopelessness, and that my addiction to gambling was about creating excitement and re-exposing myself, ultimately, to shame. Through therapy, I dealt with the underlying issues, the root of all being the trauma of CSA.

Therapy was about understanding cerebrally the effects of that trauma, accepting the construct of a family that perpetuates and hides abuse by disabling the child’s (my) emotions, and learning to be with and dissipate intense anger, shame, guilt and lack of trust and self-worth. It was also understanding and choosing to work on my need to generate safety through a complex array of behaviours that were often destructive and no longer served me, and a seemingly endless wilderness of other intertwined stuff, all deeply rooted and enmeshed with addictive behaviour. Addiction was my antidote; I swapped it for therapy, group therapy, body work, conscious behavioural choice and self-care.

From age 17 to my breakdown at 53, I always had marijuana in my life. Oh, the relief of the first smoke – I was forever trying to get back to it. It became my constant companion.

The impact of events including deaths and the inability to get work, as well as loss of purpose and a suffocating sense of doom, became stronger as I became weaker. The constant belief that it was not if but when I would kill myself came into sharp focus. When my surrogate younger brother took his own life, the devastation that followed caused me to vow not to, but a GP I sought help from claimed I wasn’t depressed. I stepped up the addiction, chain-smoking three joints first thing in the morning.

Moving to London as a way of gathering hope, I managed to drop the drugs for two years – a stretch for me. Visiting a GP there with an arm problem, I broke down and sobbed as I got up to leave, and she asked if I wanted to talk to someone. I conceded that I needed to. For a year, an experienced therapist in the process of changing her modality joined what became my odyssey of recovery. I saw another therapist for a year after that. Different styles – dictated, it seems to me, more by the therapist than the method. I focused on the positives from each experience in order to recover. Now I am free.

Recently I spent an afternoon staring at a photo online that I’d never seen – a school photo when I was 14. I couldn’t truly define what I, that boy, was thinking and feeling. There was grief in that, like the passing of my acquaintance – the addiction. But change happens; it is possible. I am no longer that 14-year-old boy and, similarly, I am no longer an addict. I have moved on. From the Board: Moira Sibbald

'No matter how the Board and Committee members have arrived in their positions at BACP, we are very conscious of the aims and objectives of the organisation and our responsibilities to you.' Therapy Today, February 2021 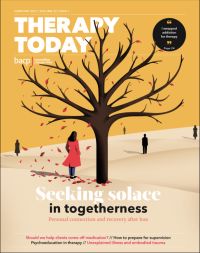