This month’s ‘Talking point’ is compiled by Sally Brown

‘Nature grounds us in the moment’

As a trainee, I always knew I wanted to take therapy outside. Remaining sedentary behind closed doors can, on the one hand, provide a womb-like container for deep work, but it can also feel intimidating for clients when they enter the therapist’s space and feel the intensity of their gaze. As we know, there is no one-size-fits-all approach to therapy. Outdoor work can provide something different. Walking side by side promotes equality in the therapeutic relationship. I notice I feel less inclined to fall into the trap of ‘expert’ – the surroundings enable me to be more congruent. We work in real time, making decisions about which path to take, negotiating mud, rain or other people, generating rich opportunities for immediacy and exploration. Clients may also return to the space on their own, integrating a new resource for self-care. Time spent in nature has helped me to find clarity in my own internal narratives during some of the more challenging times in my life. When working with clients outdoors, nature becomes a welcome co-therapist, grounding us in the moment and making itself known through the weather, the flora and the fauna, all full of rich metaphor. A silence punctuated by the first cuckoo of spring can bring a moment of joyful connection to the wider cycles of life and our place within it, helping to bring perspective to daily struggles and reduce anxiety. After all, without the dark winter we wouldn’t have spring. A society motivated by instant gratification has all but lost touch with these important rhythms. I believe that, to tackle problems such as inequality and climate change, we must tackle our disconnection – to our inner worlds, to our bodies, to each other and to nature. How can we look after nature if we can’t look after ourselves?

I’ve always loved spending time outdoors, paddling through streams as a kid or threading my way through forests carpeted with undergrowth. Even before I’d qualified as a counsellor, I completed a course in working outdoors – if we are going to work outdoors, training is essential for the safety of ourselves and our clients. Working outdoors is physically demanding; it involves more planning and preparation, but I feel it offers something special that we would struggle to access in a therapy room. By engaging with the world around us, the whole process can be much more than ‘walk and talk’. I give the client freedom to choose where they want to go, both in relation to the content they bring and the physical path they wish to take, and often these align. It isn’t a test of endurance or a lesson in climate change, it’s about the client. The natural world around us becomes a therapist in its own right. I’ve worked with nature to ease the exploration of anxiety, challenge and explore overthinking, and to find a pathway into experiencing mindfulness. By taking therapy outdoors and allowing it to play an active role in the session rather than simply replace a room, I feel we have the potential to offer the client so much more.

I introduced ‘walk and talk’ therapy into my practice as a way of continuing in-person work during lockdowns. It seems to attract men in particular; many say they would not engage in traditional talking therapy in a room because it would feel too restrictive. One of the many positive aspects of walking with a client is that it’s a demonstration of self-care, beyond simply talking about it. I also find that clients work through problems more quickly outdoors, as if the action of walking encourages self-awareness. There are limitations, however, including confidentiality. Passing walkers can halt a session temporarily. Where this happens, I bring it into the session and discuss it. Time boundaries can also be harder to maintain, as the pace of the walk can differ between clients. I also need to factor in extra time to get to and from a session, so I limit the number of sessions delivered in this way to two per week. I’m a keen walker, and these sessions are very much work, so I make sure I factor in time for walks for my own pleasure. I’m proud to offer a service that increases access to therapy for those who would not want to sit in a therapy room.

‘Working indoors had a constrictive effect on my body’

As the pandemic emerged, we left London and moved to rural East Sussex. Like many of us, I had an inkling of the positive effects of nature, but I didn’t quite realise that it went far beyond this. As the months passed, I began noticing something I could only explain as layers of held tension dropping away. I knew I was hypervigilant but hadn’t realised the cumulative effect living in a busy city had on my nervous system. I began taking long walks in nature almost daily and gained clarity, answers and further healing, and with this came a growing sense of resilience I didn’t think I had. Before moving, I had taken a break from counselling work as I felt as though I couldn’t hack it, that I wasn’t resilient enough, and my confidence had begun to wane as time went on. A CPD course in outdoor psychotherapy changed things for me – I felt that, with the sense of containment I received from nature and the training course, I could give counselling another go, but this time I would take my work outside. Working indoors always had an oppressive and constrictive effect on my body and breath – it was as if the work landed in me, instead of passing through me. Working outdoors, I feel contained, stronger and clear minded. I can also see the profound effects on my clients. They seem more expansive and enlivened, and make connections much quicker than I experienced during my indoor work. Sometimes I feel my purpose is simply to witness their process as it naturally unfolds.

‘I’m walking in the footsteps of William Blake’

Twenty-five years ago, I spent some months living in the lush, dense, tropical natural environment of the Colombian cloud forest. Every hanging branch was a potential python, mosquitoes incessantly bit through my clothing, howler monkeys more than lived up to their name, furry tarantulas stealthily scuttled in and out of the wooden shacks where we slept, and it rained and rained and rained. After a few weeks of stubborn but futile resistance, the only response was to let go and be with things as they were. Some time later, I started my therapy practice working in a small room above the vibrant atmosphere of Brick Lane in east London. Noticing a number of my clients were experiencing an ongoing conflict between how they wanted life to be and the reality of how things were, I wondered if being outside in the year-round unpredictable London weather could offer a similar experience for my clients as I had encountered in Colombia. Initially, I drew clients who appreciated both the freedom to move and not having to look directly at me as we walked side by side. My experience since has been that clients are more willing to move, jump and shout as they express themselves outdoors. Paradoxically, there is something about being outside in a shared space in proximity to other people that allows clients to release their anger in outstretched elbow swings, and to raise their voice with an ease that isn’t as readily apparent indoors. Working outdoors, I feel the presence of others. I’m walking in the footsteps of William Blake, who traversed many of London’s open spaces. When on Hampstead Heath, I often picture a gleeful Donald Winnicott freewheeling down Parliament Hill on his bicycle, his legs outstretched, giving a joyful yelp as he passes by. 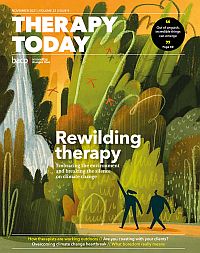