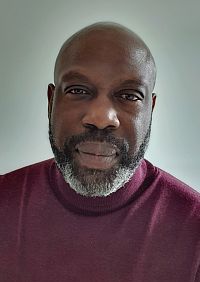 Dr Dwight Turner is course leader in humanistic counselling at the University of Brighton, and a supervisor and psychotherapist in private practice. His book, Intersections of Privilege and Otherness in Counselling and Psychotherapy: Mockingbird, is published by Routledge.

On Sunday 11 July 2021, the England football team took on Italy in the final of the delayed UEFA Euro 2020 Championship, held at Wembley Stadium. This was a once-in-a-generation event, with a unique team that had surpassed the expectations of many – a team made up of English middle- and working-class footballers, some of whose families had emigrated to this country over the past couple of generations.

That this was also a team that ‘took the knee’ for Black Lives Matter, often while being booed by a section of their own supporters and criticised by their own Government, showed the cultural and political context these games were played within. So, when three of England’s black players failed to convert their spot kicks at the end of extra time, meaning that the team sadly lost in the final on penalties, the vitriol directed at them was in no way limited to their courage and ability at football; it was about their race. The level of dehumanising racialised hatred unleashed in the wake of the defeat, just one year after the murder of George Floyd, demonstrates for me exactly why we are still talking about Black Lives Matter.1,2

Message received February 2021 in response to a social media post where I commented on being told I looked like a bouncer by a fellow practitioner: I would rather have someone who looks like you than the white therapist who actually told me I ‘looked white’ so as to avoid the experiences of racism I had come to therapy to explore.

When I first heard the news about George Floyd’s murder in May last year, my initial reaction was one of silent anger that, yet again, a black person had died in public. Initially, I was not going to say or write very much about the subject, preferring instead to hide away and stew in the cooling sweat of my own rage. Prompted by a friend and colleague, though, I decided to write something about what it is to be a black man and a black psychotherapist. I described how that week, in my own personal therapy, I had talked about what it was like being a black British man who is often seen as a threat.

‘Being born and raised in London, my time growing up in the 1970s and 1980s was often punctuated by run-ins with the police. I was often stopped in the street and told by the police that they were responding to a report of black boys robbing, stealing or mugging, had my bag searched, and told to go home as I shouldn’t be out at that time of day. I have had women cross the road to get away from me or watched them grip their bags tighter to their sides as I passed too close to them seemingly. I spoke about what it has been like to see the news from both here and abroad, to watch the dehumanisation of my brothers and sisters play out like some type of racialised pornography on television yet again.’ 3

This blog was tweeted, retweeted and shared by many practitioners and public alike – these actions a testimony to the power and resonance of the words displayed for us all, white and black alike.

The level of dehumanising racialised hatred unleashed in the wake of the defeat, just one year after the murder of George Floyd, demonstrates for me exactly why we are still talking about Black Lives Matter

The months that followed George Floyd’s murder marked a watershed moment in British culture. Numerous organisations took to social media to black out their pages for a day in support of civil rights, while others – individuals and organisations alike – did very little, deciding instead to ignore or not take part in these ‘culture wars’. That the grand reveal of this split within this culture’s framework was then mirrored in our counselling and psychotherapy courses was not a surprise to those of us who have long fought for change and recognition within our profession. Motivated into action, though, organisations such as BACP, UKCP and many others who had perhaps previously been slow to recognise their important role in educating and working with the racialised identities of both white and black practitioners and clients alike, began cranking into gear our profession’s massive machinery to bring its knowledge to bear upon society.

Email received May 2021: Not sure you can square spirituality, or psychological health, with your espousal of critical race theory movement’s tenets, which are designed to wreck the confidence of ‘white people’ and tear down society’s stable structures.

Race in the room

Even within the realms of psychotherapy, the idea that I might be a prominent black therapist, academic, a writer or a lecturer inevitably draws ire from colleagues. Microaggressions, subtle put-downs, snide remarks – these are all part of my regular engagement with the psychotherapy profession.

When issues of race come up in society or are explored on our courses and in our therapy sessions, it is practitioners on both sides of society’s binary racial construct4 who are egoically challenged. A perfect example of this emerged from my work with a client who I shall call Flora. After several months of work together, she entered one session in floods of tears. I sat with her, and she eventually told me of a situation at her son’s school just outside London, where a substitute teacher had taken her son’s class and had proceeded to use the ‘n’ word numerous times in expressing her anger over the amount of news coverage given to the anniversary of George Floyd’s death. This teacher even went so far as to single out her son as an example of just how worthless black boys are in this society.

That I have a voice now will always challenge the egoic, socially constructed structure that is whiteness because I am refusing to be what they want me to be, because I am free to be who I want

Her 12-year-old son had come home upset and angry. Yet his frustration was not so much down to the teacher, or even the school. No, it was aimed at other teachers at the school who told her son that he should just ‘get over it’. This was what left Flora most angry – that racism had become something to be brushed under the carpet by the teachers in the school itself, and that the trauma this boy had endured had not been recognised. For me, this was also systemic and institutional racism at play.

Much of the work with Flora, however, was to consider her own internalisation of white supremacy, where the teacher holds ultimate sway, where the idealisation of middle- and upper-class professionals had led to her being silenced as the mother of her black child. We talked a lot about the need for parents of colour to have ‘the conversation’ with their sons and daughters about what it is like being the racialised other; how to get through school, life and society on a day-to-day, month-to-month, year-to-year basis, knowing full well that we will endure thousands of ever-deepening cuts of microaggressions.5

Message received July 2021: You are a man of great integrity. But you seem to drive a wedge between white and black alike. You’re [sic] angry undertones don’t sit right for me. Sorry mate but you haven’t struck any chords for me in terms of bringing about harmonious togetherness. Which it should be. Get off your soap box.

The legacy of George Floyd’s murder was recently explored in a television programme.6 In this programme, and many others, recognising the role of white supremacy in the oppression of the racial other has become a regular feature of explorations around difference, privilege and otherness in a way not seen in a generation. It’s time for this to be echoed in the world of psychotherapy. Dedicating an issue of Therapy Today to Black History Month may not change anything, but it acknowledges that change is needed.

Our courses need to be better at assisting and educating students and experienced practitioners on both sides of the racial divide in the importance of understanding race, intersectionality and difference. They need a better understanding as well of the psychological underpinning of white fragility. And they need to see that, for any movement towards togetherness and equality, shame in recognition of the pain of the other, their brother or sister or friend, is part of the route towards reconnection and psychological growth.

Yet, while I say all this, I need to add a personal message. These statements in bold, messages I have received over the past year, have come from other professionals, men and women, from therapists and non-therapists alike. These are just a snapshot of the vitriol that I as a black man, an academic and psychotherapist, have to deal with on a regular basis, and in particular since George Floyd’s murder. That I have a voice now, that I stand to fight to be seen as a human, will always challenge the egoic, socially constructed structure that is whiteness because, as Muhammad Ali himself intimated, all of a sudden I am refusing to be what they want me to be, because I am free to be who I want.7

So why are we still talking about Black Lives Matter? Well, because there is still so very much more work to do. 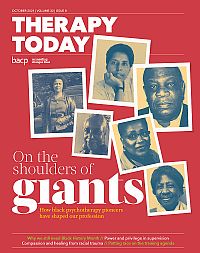