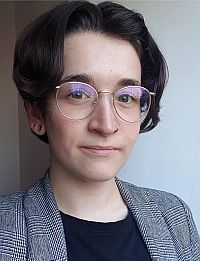 Nicolas Pope is a student of integrative counselling and psychotherapy for children, adolescents and families at Roehampton University. With a background in youth work, mental health and PSHE education, they deliver CPD to help others understand and work with children and young people. To help protect lives like theirs, see www.banconversiontherapy.com

During a breast cancer scare in my mid-20s, I became excited and started planning a chest tattoo, hoping for a flat canvas. As I described tattoo ideas to my partner, he looked horrified and said, ‘This is not how people react to this.’ He was right. I thought of the women I’d known who battled breast cancer, how much strength and effort went into maintaining femininity and womanhood in a time when illness attacked. This was different; the thought of losing femaleness was a victory that set me free. Even if my life was at risk, the potential prospect brought relief and joy. But it forced me to realise that I was not cisgender, and that the feeling I continuously pushed down all my life was gender dysphoria. I was terrified.

This realisation ripped away my coping mechanism of denial. I was left exposed to all the dysphoric feelings, past and present, and had never known pain like it. It felt like my life was over; I knew some family members would struggle to accept it, and I was engaged to a wonderful heterosexual man who loved my gender non-conforming ways. I was praying I had cancer because dying of cancer would be easier than being trans and figuring out what to do. The results came back and the lump in my chest was nothing to worry about. That was when suicide felt like a viable option, so I sought out therapy.

I searched for a therapist who said they worked with LGBTQ+ people. I wanted them to tell me that I could work on these feelings and feel OK living as a woman – I planned on throwing everything I had at making that a reality. I desperately didn’t want to disappoint my family or lose the man I love. I would have trusted someone I believed to be an ethical and knowledgeable professional and done everything they said to make my transness disappear. I desperately wanted to be cisgender. I wanted conversion therapy, which we as a profession know would have only made things worse.

Luckily, I met a therapist who practises an affirmation-based model. They rightly would not tell me I was trans or what to do next regarding dysphoria. Instead, they created a space where I could begin to feel safe exploring these feelings, understand them and decide what was right for me. Four years later, I am starting hormone treatment and have a private consultation for top surgery soon. It’s not been an easy process, but it has brought me joy and comfort that I hadn’t thought possible. I have never been more sure or excited about the future. I only grieve for the life I would have had if I’d been able to accept all of myself sooner.

I am trans, masculine, queer, and a soon-to-be-qualified child and youth therapist. I am lucky to be alive. Internalised transphobia, homophobia and misinformation threatened my life, and it was an informed, ethical therapist who saved it. Working with the pursuer-withdrawer dynamic

Anne Power uses attachment theory and EFT to explore how to help couples become more secure both in themselves and their relationship. Therapy Today, June 2022 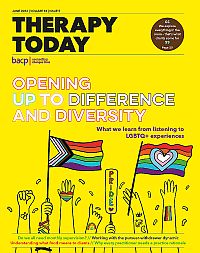