Equal access for all
BACP vice-president Linda Bellos in conversation

The ripple effect
Irvin Yalom on overcoming the terror of death

Outside the therapy room
A new model for embedded counselling

A great deal
The value of counselling to the public purse

Body of evidence
New evidence of the effectiveness of healthcare counselling

Every counsellor matters
What practitioners working with children need from supervision 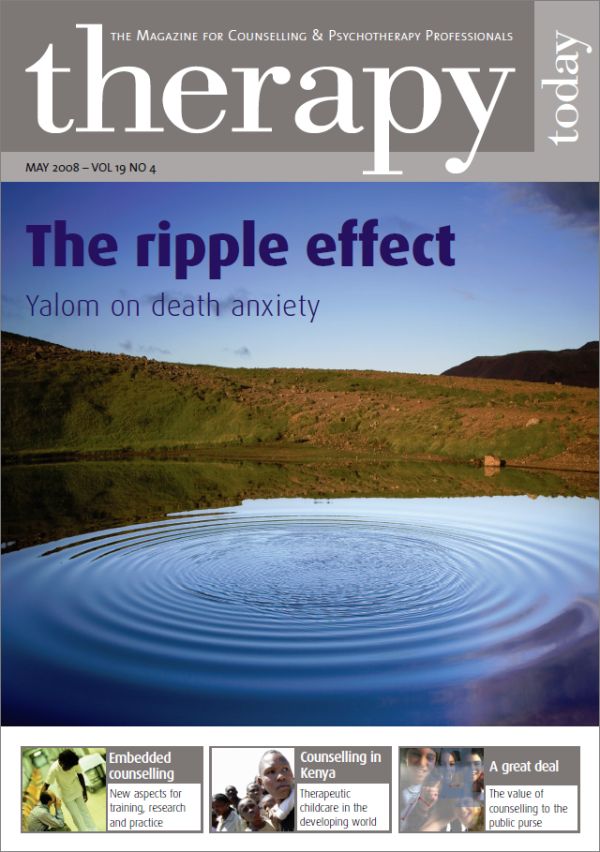 Articles from this issue are not yet available online.

Here is some food for thought: despite huge expansion in the last 20 years of counselling services in all shapes and forms, the majority of counselling still takes place outside of the therapy room, in encounters with nurses, teachers, priests, social workers, youthworkers and others – sometimes called counselling skills users.

John McLeod who has written a book on this subject feels that there is a danger in reducing this activity to ‘counselling skills’ as compared with the ‘real’ business of counselling that takes place within a professional context – the danger being that it decreases the value of relationship and dialogue. In his article, ‘Outside the therapy room’, he suggests that it would be tragic if our focus on the professionalisation of counselling resulted in people who offer counselling from within another role – ‘embedded counselling’ as McLeod calls it – feeling that they were no longer capable of providing the kind of support which can be as ‘life-changing’ or ‘life-saving’ as counselling within the therapy room. Indeed this would be counter to BACP’s vision ‘towards an emotionally healthy society’. Now that counselling has established itself as a profession, it is time to pay some serious attention to how we can support and develop the use of ‘embedded counselling’ which has the potential to help a huge number of people deal with what McLeod calls ‘problems of living’.

Our cover article this month looks at the problems of dying, or rather the problems of living knowing that we will die. This is an extract from Irvin Yalom’s latest book in which he contemplates the role that death has played in his own and in his clients’ lives. Having read Yalom’s book, I brought up the subject of death at a recent gathering of friends. A few eyebrows were raised and a little nervous laughter ensued before the conversation moved swiftly on. This was a pity as I could have shared with my friends some of Yalom’s very comforting and life-enhancing thoughts on death that he uses with his clients who are suffering from conscious or unconscious death anxiety. One that particularly caught my imagination and that I had never thought of is Epicurus’s simple notion that after death (according to an existentialist viewpoint at least) we will be in the same state of nonbeing as we were before birth. Why then do we view the prenatal abyss with so much
more calm than the one we are heading for?

Yalom’s idea of ‘rippling’ is also rather wonderful and helps to quell death anxiety and distress at the transiency of life by creating meaning and a feeling of continuity. This he describes as the way each of us creates concentric circles of influence that may affect others, including people we have never met, now and also for generations to come. And therapy, Yalom says, offers opportunities par excellence for rippling: ‘In every hour of work I am able to pass along parts of myself, parts of what I have learned about life.’