Making a difference: the roles of groups in developing self-efficacy
Liz Diamond and Anne Proctor offer two perspectives on how groups can help develop individual self-efficacy and at the same time aid the counselling service to become more embedded in the institution

Running a mindfulness group
If it works for Tibetan monks, can it work for students? Cathy Theaker reports on her experience

A personal experience of a labyrinth
Mandy Gaylard recalls a visit

Coming out of apathy
David Mair and Sue Knight throw out a challenge to counselling services, arguing that for lesbian, gay, bisexual, transgender and queer students, active support is what is needed

Congratulations, Cardiff!
BACP award for a client-focused university counselling service that has reduced its waiting lists to zero

Notes from the chair
Update and thoughts from Chris Holt 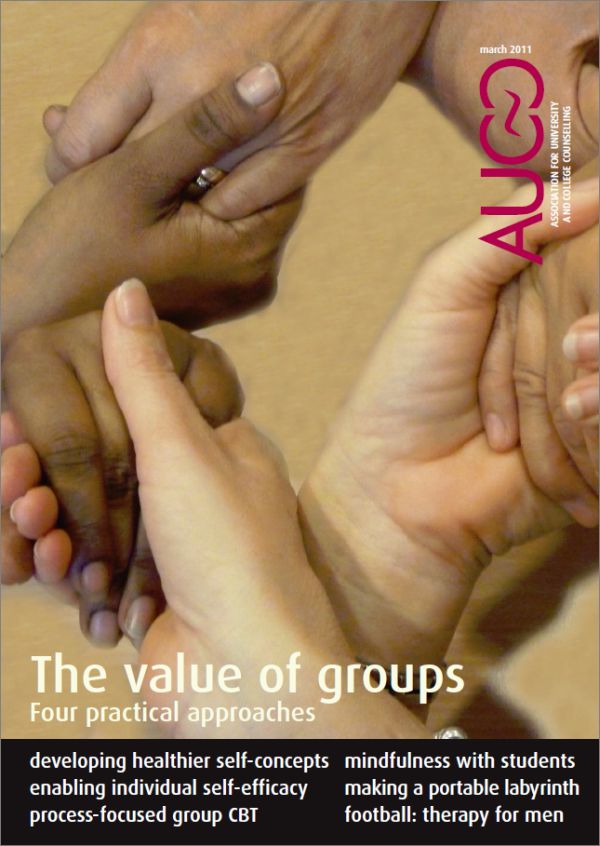 Articles from this issue are not yet available online. Divisional members and subscribers can download the pdf from the University and College Counselling archive.

As editor, it can at times be a strain to find a ‘theme’, but occasionally one miraculously arrives in your lap. This issue is primarily about groups – perhaps not surprising as groups can be considered more cost effective during these times of not only restraints but serious cutbacks, cutbacks that are beginning to affect us all.

As RD Laing once remarked, ‘treatment is about how you treat people’, and the opportunity to be with others in an environment of free-association, where you can contribute spontaneously without fear of retribution, is not to be sniffed at.

Our culture of ‘results’ and planned ‘outcomes’ is a far cry from the radical beginnings of psychoanalysis where the aim was to listen to the symptom until it spoke, until the patient/client emerged into the light of their own  understanding. This process takes time, and now that is one thing in permanently short supply. Time has become a commodity like all others. Like food. Like time off. Like education. Like work. There is not enough to go around and consequently everything becomes more scarce and expensive.

We have become convinced that we live in conditions of scarcity and that the ‘market’ can solve this artificially created ‘problem’. It is a central belief, originally described by Adam Smith, that each person acts out of self-interest. It is also held to be an incontrovertible truism that each person will act in the service of ‘growth’, that is, to continue to amass as much as possible… and then make more – and that profit is desirable.

This applies to human resources as well, which is why work, being the means of production of profit and ‘growth’, has to be maximised too. This explains why most of us are probably working more hours under more pressure to see more people than ever before, who themselves are usually collapsing under enormous pressure to do more and produce more ‘work’. But is this mad factory farming actually necessary? Does it not run directly counter to anything resembling education? Does it really have to be this way?

And if you don’t like it? Well, you know what you can do… plenty more where you came from… Staying and complaining? Take this disciplinary procedure, and a nasty letter from ‘human resources’. These beliefs seem to be driving political policy in the UK at the moment. George Bush’s famous opening statement at a dinner speech in 2000 – ‘This is an impressive crowd – the haves and the have-mores. Some people call you the elite. I call you my base’ – reminds us that this elite is now firmly the political base here too. Politicians can now be heard saying quite openly, ‘why should anyone pay for anybody else’s education?’

Recently, during the tuition fees protests, a group therapist was running a group whilst a small and relatively polite riot was going on in the street below. The students in the group reflected on this situation… to be, or not to ‘be’. Is it nobler to think these things through, or to take up arms and do something? (Or in modern parlance: to become or not to become ‘one of the movement, one of the faces’?) These matters were reflected upon... then about half of them went off to join an occupation.