State of mind
How can we understand our role in our organisations in a period of turbulent change, asks Julian Lousada. Are we just observers, or have we been enthusiastic or unwitting participants in a process we now regret or cannot control?

Online support
In the face of rising fees and fierce competition for places, the stakes and stress levels of students are rising, with many already experiencing mental health issues prior to their arrival. Jenny Hyatt describes a new approach to student wellbeing

Clay therapy
Lynne Souter-Anderson suggests that the rise in interest in alternative therapies may be the result of counselling becoming mainstream within mental health provision, and the realisation that to rely solely on talking therapies is not the only way to improve emotional wellbeing

Notes from the chair
Update and thoughts from Chris Holt 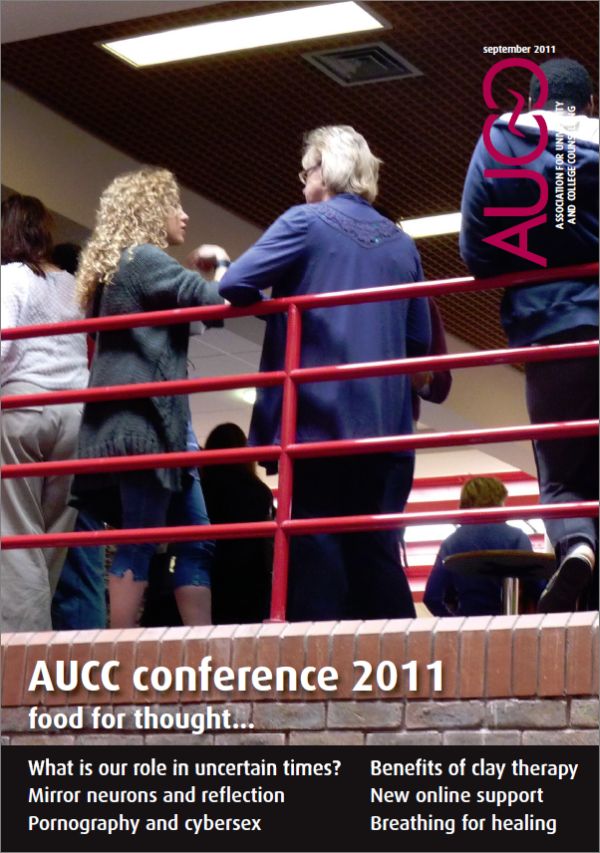 Articles from this issue are not yet available online. Divisional members and subscribers can download the pdf from the University and College Counselling archive.

Welcome to the post-conference edition of the journal; some 150 delegates attended two programme-packed days last June covering a veritable cornucopia of topics. These included the state of mind we are in, organisationally as a profession, by Julian Lousada; the pervasive impact of pornography and how some therapists may want to dodge the issue, by Duncan E Stafford; a new computer-based resource for mental wellbeing under the auspices of the Tavistock, by Jenny Hyatt; and creative responses to stress – our clients and our own – through breathing (Dawnie Brown) or working with clay (Lynne Souter-Anderson).

This year, most participants were from universities, as unfortunately all too many of our FE colleagues were concentrating on weathering what proved to be a difficult year after seeing several colleagues lose their jobs (see Dawn Hastings’ report, ‘Riding the Storm’). And this despite a recent Government White Paper, entitled ‘Students at the Heart of the System’ which seems to acknowledge that good pastoral care can at times ‘make the difference between completing a course and dropping out’.

Few would disagree that education holds the key to solving problems ranging from long-term poverty to domestic violence. It is education that will prepare the next generation for future unpredictability that we, as practitioners from various and sometimes conflicting modalities, struggle to grasp.

Julian Lousada, a university teacher before he became a clinician, set the tone for the conference with his opening keynote address. While articulating salient aspects of the unpredictability of current conditions, Julian posed searching questions for the positions, both personal and professional, that we adopt. That same rallying call to us as professionals to take our heads out of the sand emerged in several of the workshops as well as in the final plenary session (see Mary Dailey’s Conference Questions and Answers report).

Could, should, we, in relatively rural Staffordshire in June, have anticipated the civil unrest, riots and ‘ventings of spleen’ that were to follow in August? Apparently, highend trainers and personal digital assistants – symbols of wealth  and status – were what looters particularly craved; a powerful indicator of the perils of commodification. If we accept that the disaffected youth who took their grievances to the street included some of our students, then we must  surely ask ourselves, how we as a profession can be robust enough to contribute effectively to the aftermath. As eminent historian EP Thompson once said, in a world where the powerless are generally invisible, the riot is a form of ‘collective bargaining’. Despite the anxiety provoked by this form of direct action, how do we think about the emotional as well as material deprivation that lies behind what happened, the tension between engagement and punishment and what we can do to help facilitate a return to the idea of ‘a relatedness between the self and other, the citizen and the social context’ as Lousada put it so prophetically?

For those who could not be there, we thought you might like to savour some of the flavour in pictures, and for those who were there, a memento of pictures – please see the inside back cover. We hope you enjoy this issue of the journal at the start of another academic year and will be driven to present your views. We are the sum of our members so please do get in touch and share your ideas through the AUCC journal.