Beverley says 'I realise it is simplistic to provoke people with the exhortation: Don’t just sit there….'

Evidently, counsellors and therapists do not just sit on a chair. An activity which responds to social injustice issues from within the therapeutic frame, but outside of the consulting room, is different from the one to one therapeutic encounter. The challenges are different.

In this section, you’re encouraged to engage with exercises which help to explore your relationships with power and authority. You'll complete a case example to illustrate the types of dynamic, relational and ethical issues that can occur in a social entrepreneurial project, and how that differs from the one to one counselling encounter.

Hear about social enterprise and the personal attributes and skills of a social entrepreneur, and explore power, authority and social justice in this audio recording.

This is the Drama Triangle discussed in the audio recording. Even though one is called victim, all three originate out of, and end up back at, the position of victim. 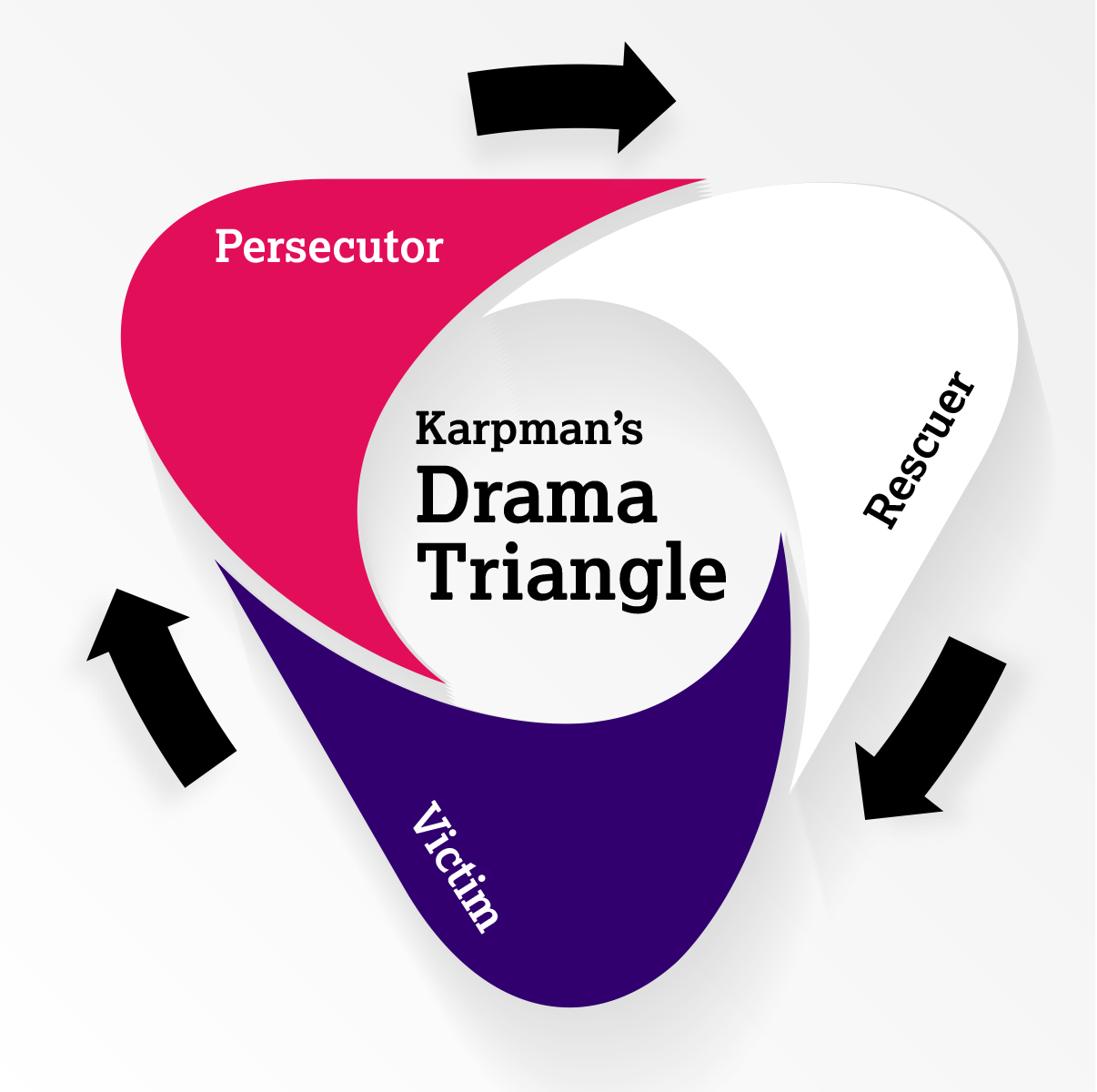 Accessible description of the Drama Triangle

The three positions identified in the triangle are the roles of Persecutor, Victim or Rescuer. Each role takes up a place on each corner of the triangle. Arrows show the movement of role from corner to corner, from Persecutor to Rescuer to Victim and so on.

The Drama Triangle, conceived by Steven Karpman (1968) (Fig.1), draws on the model of Transactional Analysis (Berne, 1961). The Drama Triangle offers a way of considering reciprocal roles in relationships - especially helping relationships and the tensions of shifting power and responsibility within them. The triangle maps the interactions and behavioural exchanges between two or more people, which happen out of awareness. It's a useful device for monitoring the roles and behaviours of individuals or groups in relationship with each other.

In helping relationships, it's not surprising for the helping professionals to be attracted to the Rescuer role. In the Drama Triangle, the role of Victim may be experienced by anyone in the triangle. The role of the Persecutor is unlikely to attract anyone in the triad although it will pull in anyone who is unaware of, or disregards and ignores their power.

View this case study as an example of how much energy can be absorbed by managing destructive dynamics, even within a small project.

You may wish to have a pen and paper handy, to make notes on your responses. You’ll be asked to consider some questions in response to the video.

Here are some questions to think about.

You may find it helpful to pause the video between each question to think about your response.

These statements may help you to reflect on your relationship with power and authority.

It's useful, if we're in a position of authority (for instance, as a social entrepreneur or a founder of an organisation or project), to reflect on how we respond to people in authority.

If we have issues with authority, it's a good idea to consider how they might get played out if we don’t bring some of our sensitivities around authority and power to our awareness.

You may find it helpful to pause the video between each statement to think about your reflections.

You’ve now heard our first case study, thought about some key questions and noted your emotional reactions to several statements.

Now consider these questions, thinking about your reactions and your relationships with others and how they might map onto the Drama Triangle.

You may wish to pause the video after each question to think about your response, and jot your thoughts down on paper to reflect on later on.

Review what you've learned so far

Reflecting on the aims of this section, consider the following questions.

You may wish to make note of your responses to refer back to later.

In this section you've learned about therapeutically framed social entrepreneurism and the personal skills a social entrepreneur may wish to develop. You’ve considered some of the tensions in therapeutically framed social action and how they differ from the tensions and challenges of one to one work. You’ve considered your own relationships with power and authority and the ways in which helpful and unhelpful dynamics can be played out in social action projects.

The next section will introduce you to the Social Response Cycle, the purpose it serves and how it can be applied. Introduction to the Social Response Cycle as a structure for developing and delivering social enterprises, projects and evidence of effectiveness.