Click on the pdf to view the poster at full size

In the client’s experience, is the person-centred approach effective in helping them process their diagnosed/self-diagnosed anxiety disorders/issues? (pdf) 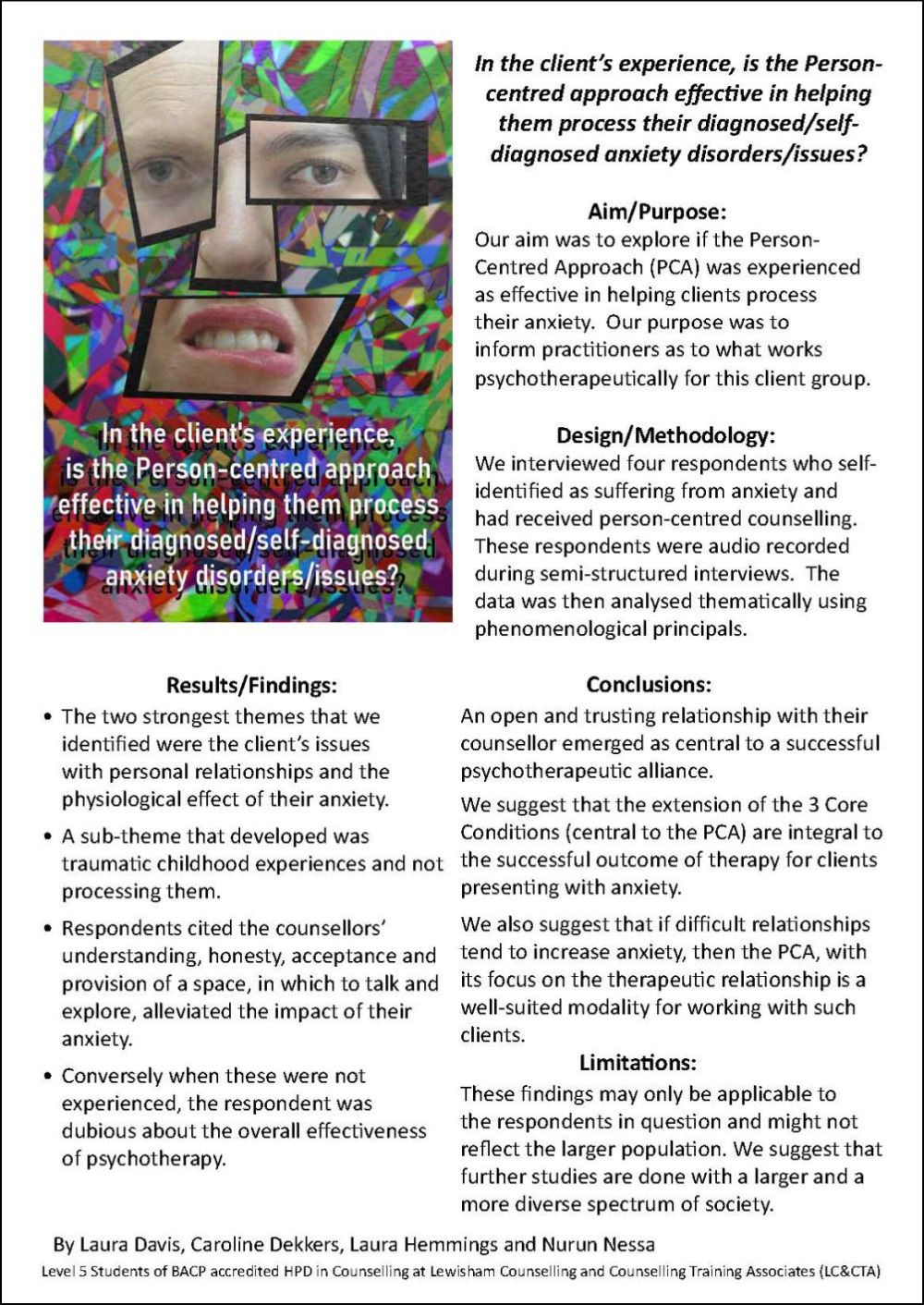 The research aim was to explore if the person-centred approach (PCA) was experienced as effective in helping clients process their anxiety. The research purpose was to better inform practitioners as to what works psychotherapeutically for this client group.

The research proposal was submitted to and approved by the College Ethics Board. Respondents were offered six no-fee counselling sessions if issues had arisen due to their participation in the research, which was conducted according to BACP guidelines for ethical research in counselling and psychotherapy (Mitchels, 2018).

2. It also appeared that difficult personal relationships, with family, colleagues, intimate partners or in social situations were a common underlying cause of our participants’ anxiety. An open and trusting relationship with their counsellor emerged as central to a successful psychotherapeutic alliance. Participants cited the counsellors’ honesty, acceptance and provision of a space, in which to talk and explore, alleviated both the psychological and physical impact of the clients’ anxiety. Conversely when, what appears to be, the above conditions were not experienced by respondents, they were dubious about the overall effectiveness of psychotherapy.

The limited number of respondents may make it difficult to generalise findings (McLeod, 2003) and as the research analysis was rooted in phenomenological principals, the findings may only be relevant to the participating respondents.

Findings suggest that the extension of what appears to be, the Three Core Conditions (central to the PCA psychotherapeutic alliance) are of upmost importance to the successful outcome of therapy for clients presenting with anxiety. Findings also suggest that if difficult relationships tend to increase this client groups’ anxiety, then the PCA, with its focus on the therapeutic relationship as central to psychological and emotional adjustment, is an ideally suited modality when working with such clients.

In the experience of clients who identify as addicts with shame-based experiences, how might counselling help with their recovery?