Sarah says the unconditional affection and acceptance offered by animals can strike a chord with old people and young people alike.

And she says the benefits include development of relationships and better social interaction, relief from anxiety and stress; and the chance to learn new skills.

Around a third of Sarah’s clients at her Counselling and Therapy Services near Dartmoor are supported through animal-assisted therapy, equine-assisted therapy or walk and talk sessions on the rolling Devon hills.

“Animals don’t care who you are,” said Sarah. “You could be from any level of society, they are unconditional in that regard.

“Some people feel safer around animals. They get an opportunity to form a relationship in a way they won’t be able to with a human. It doesn’t have strings attached.”

In Oxfordshire, Jill Tidswell took her labrador Choco (pictured below) into a nearby school to help children with learning difficulties and into a home for people with dementia.

Jill said she wanted to use her spare time to do some charitable work – “but I didn’t want to leave Choco on his own at home” – and so became involved with Pets As Therapy.

“The children would read books to him, they found it quite calming,” she said. “It’s a bit of a treat for them if they can sit on the floor, stroke the dog and read to him.

“The people in the home had varying degrees of dementia but seeing and stroking Choco they would remember or talk about their pets.

“They might remember they had a pet from 80 years ago when they were growing up but couldn’t tell you if they had children. That was astonishing, really.” 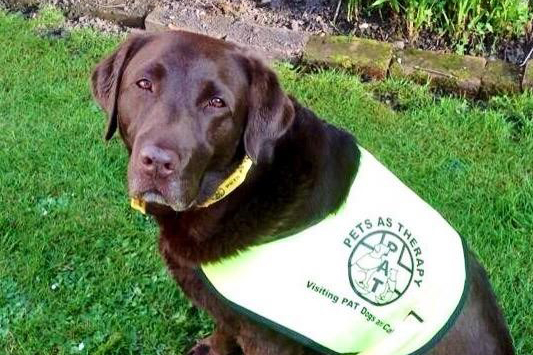 Sarah’s therapy includes work with horses, dogs and cats, and she says the interest is growing all the time.

“We really are taking mental health more seriously,” she said. “That’s partly why interest has picked up in animal-assisted therapy, because we are looking for intervention that works, particularly around young people.

“And for older people too. For example, I’ve worked with animals like donkeys or small ponies, because older people can remember them from the beach as a child. It is amazing the stories that come out and what they can remember.”

She added: “There are a lot of different things going on out there, they are not all the same. It’s very much that there is something for everyone.”