A BACP counsellor said she is “shocked and delighted” to have been awarded an MBE in the Queen’s New Year’s Honours for her work helping women who have experienced sexual violence.

Sue Pearce, co-CEO of Rape Crisis Tyneside and Northumberland (RCTN), began her career in 2001 when she became a volunteer counsellor for the Rape and Sexual Abuse Counselling Centre, based in Darlington.

She is now part-time CEO of RCTN and will take on the role full-time this year.

She has provided women with more than 5,000 hours of counselling and support.

Sue, who is an accredited member of BACP, said: “I have had a very rewarding career at RCTN and I never anticipated it would be topped by such an accolade.”

Sue moved to RCTN in 2003 to take up a part-time paid counsellor role before moving in 2009 into a full-time role.

Since she started, RCTN, which has a BACP-accredited counselling service, has increased its team from three members to 19.

In 2009, Sue was one of the team instrumental in enabling RCTN to offer services in Northumberland, as well as Newcastle and Tyneside.

She moved into a part-time CEO role in 2013 and this will become her full-time job this year.

In the past few years Sue has increasingly become involved in supporting women with the issues they face in accessing a fair outcome from the criminal justice system.

She was part of Northumbria Police and Crime Commissioner Vera Baird’s Court Observer Panel looking at the progress of rape cases through Newcastle Crown Court. She was also part of the PCC’s independent panel investigating complaints about the police. 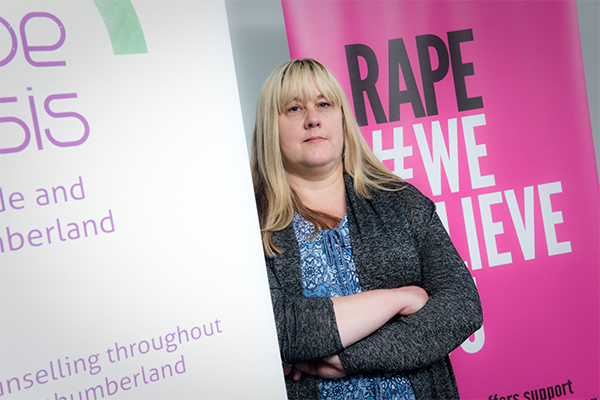 She has used her knowledge of the barriers women face navigating the criminal justice system to support the development of RCTN’s specialist Practical and Emotional Support service.

Sue is currently championing the need to improve support for older women who experience sexual violence.

She is hoping to work more to raise awareness of specific the problems older women face and provide support for them to overcome the sometimes devastating impact of sexual violence and abuse.

“Many people will find it hard to understand, but I love my job: I find it challenging and fulfilling,” Sue said.

“I am saddened and frustrated at the stories I hear from our clients, but I know that RCTN helps many of them to live a better life beyond the sexual abuse.

“It has been a privilege of working with women who were prepared to share their stories of abuse with me: I couldn’t have developed the knowledge I have without them.

“And, of course, I could not do what I do without the wonderful support of the organisation’s trustees, staff and volunteers. Thank you all”.